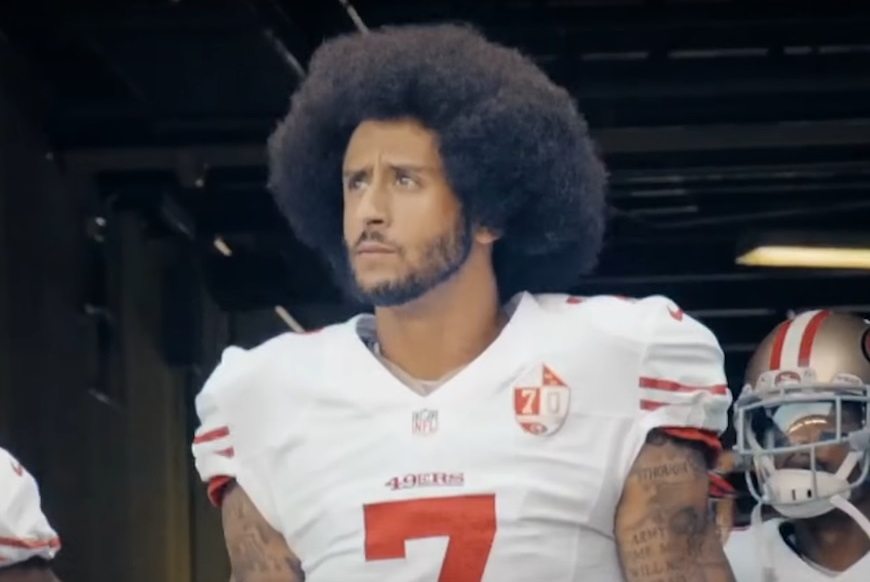 Colin Kaepernick is one of the biggest American football stars today. But recently, he has attracted more attention for his outspoken political gestures than for his sporting achievements. And while the right-wing media may have a problem with that, Kaepernick continues to build his role as a prominent public voice against injustice and inequality in the US.

In August, the San Francisco 49ers player refused to stand for the US national anthem. He has since been taking a knee during the anthem. In a clear nod to the Black Lives Matter movement, he explained his decision:

I am not going to stand up to show pride in a flag for a country that oppresses black people and people of color… There are bodies in the street and people getting paid leave and getting away with murder.

And if anyone doubted the politics behind the gesture, Kaepernick also said:

US sporting events have played The Star-Spangled Banner for many decades. And Kaepernick’s protest is far from the first. But it’s provoking much debate about freedom and equality at a time when America’s presidential elections have divided society perhaps more than ever before.

There were many in the media who immediately slammed Kaepernick’s gesture as disrespectful to the US military and the country. People have booed him. He’s received death threats. And President-elect Donald Trump has called his protest “a terrible thing”.

But he has inspired many others, including other athletes and even people singing the national anthem. Fellow American football stars have also defended him. And he himself has made it clear that he isn’t seeking to disrespect military veterans. Instead, he wants the government to protect democratic ideals at home. He said:

I have great respect for the men and women that have fought for this country… they fight for liberty and justice, for everyone… That’s not happening [in America].

Many military veterans have now openly defended Kaepernick’s cause online.

The 49ers player has also made a number of political fashion statements in the last few months. He has worn T-shirts with images of the Black Panthers, Muhammad Ali, and Malcolm X on them. And one T-shirt, showing Malcolm X meeting former Cuban leader Fidel Castro, has attracted particular anger from the right-wing media.

On 23 November, a Miami Herald journalist asked Kaepernick about the T-shirt. And when the reporter claimed that Castro’s government had divided Cuban families (more likely a consequence of the decades-long US embargo), Kaepernick insisted that the US had divided families too. He said:

That’s what mass incarceration is. That was the foundation of slavery. So our country has been based on that as well as the genocide of Native Americans.

The 49ers player’s final comment was particularly relevant considering his team’s name. 49ers were mostly white migrants who went to California during the 19th-century gold rush. And many of them participated in the government-sanctioned slaughter and dispossession of tens of thousands of Native American locals.

But Kaepernick still hadn’t finished criticising US politics. While putting the reporter’s comments into perspective, and admitting some form of oppression in Cuba, he took a more nuanced take on the island’s achievements, insisting:

They have the highest literacy rate because they invest more in their education system than they do in their prison system, which we do not do here, even though we’re fully capable of doing that.

On the US elections and the country’s future

In September, Kaepernick promised to build on his refusal to stand for the US national anthem. He pledged to donate $1m to organisations fighting against ethnic oppression and social injustice. And he launched a website to give details of how the groups would spend the money.

He has also been open about not voting in the recent US elections, saying:

I think it would be hypocritical of me to vote… I said from the beginning I was against oppression, I was against the system of oppression. I’m not going to show support for that system. And to me, the oppressor isn’t going to allow you to vote your way out of your oppression.

He had previously said:

Both [candidates] are proven liars and it almost seems like they’re trying to debate who’s less racist.

And responding to Trump’s criticisms of him personally, he argued:

Now, since Trump’s victory and the consequent energisation of the far-right, America will need Kaepernick’s high-profile stand for equality and justice more than ever.