Another British hero dies fighting Daesh in Syria, but the govt sees him as a terrorist [OPINION] - Canary 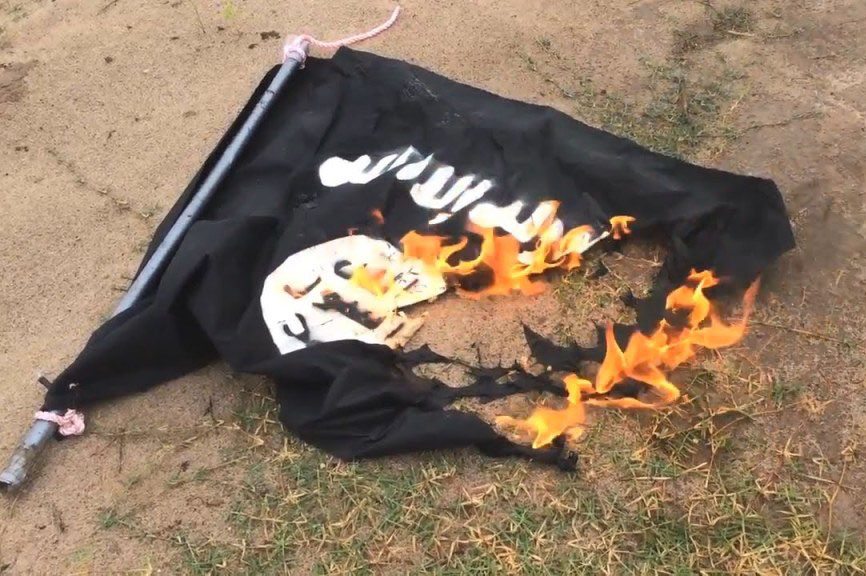 Learning about the crimes of Daesh (Isis/Isil) in Syria and Iraq, a number of young Brits have travelled to the Middle East to fight against the terror group. But because they don’t have the government’s backing, they are often treated like criminals when they return home. And the recent death of yet another Brit fighting against Daesh in Syria is a reminder that a change in Britain’s current stance is well overdue.

The death of another anti-Daesh fighter

At the start of 2017, news spread in the West that two internationalist fighters had died just before Christmas. They were fighting with the Syrian Democratic Forces (SDF), whose leading groups are the largely Kurdish YPG/YPJ. These are the self-defence militias of the autonomous region of Rojava-Northern Syria. The Canary has previously reported in detail on the secular, gender egalitarian, and directly democratic revolution in progress in Rojava.

The two fighters – Ryan Lock from Britain and Nazzareno Antonio Tassone from Canada – died on 21 December, north of the self-proclaimed Daesh capital of Raqqa. Since May 2016, tens of thousands of fighters from the multi-ethnic and multi-religious SDF have been advancing slowly on the city, which Daesh seized in 2013 and has considered its capital since 2014. Lock and Tassone both died as part of the operation to liberate Raqqa.

In March 2015, Konstandinos Erik Scurfield became the first Brit to die while fighting Daesh in northern Syria. Dean Carl Evans became the second in July 2016. Between 2015 and 2016, a total of 22 international volunteers were killed. In 2016 alone, meanwhile, the YPG itself lost 613 fighters.

What motivates the internationalist volunteers in Syria?

Macer Gifford is one Brit who has fought with the YPG. He has long campaigned for greater international recognition of their struggle. Speaking to Channel 4 after Ryan Lock’s death, he explained what motivates the hundred or so foreigners fighting alongside the SDF:

Some are more conservative… Many are left-wing. What really unites us is a belief in democracy – a desire for a secular government in Syria and a peaceful outcome to the war.

As the Channel 4 piece highlights, however, the British government doesn’t exactly look fondly on these fighters:

Return can in theory mean prosecution, as the British definition of foreign terrorist groups is vague and broad.

And indeed, authorities have arrested former YPG fighters not only in the UK, but also in the Netherlands, Switzerland and Germany. Westerners suspected of fighting (or wanting to fight) with the YPG’s affiliates in the left-wing Kurdistan Workers’ Party (PKK), meanwhile, have faced prison time.

Pressure from Turkey to treat anti-Daesh fighters as terrorists

Analysts in the West recognise that the PKK and its YPG allies are among the most effective anti-Daesh fighting forces on the ground in both Iraq and Syria. NATO member Turkey, however, is currently waging war on the PKK (and essentially on all opponents of the current Turkish regime). Because of this, the EU, the US, Australia, and much of the Western media continue to label the PKK (and occasionally their allies) as terrorists. The UN does not take this position.

In fact, if we define terrorism as “violence and intimidation, especially against civilians, in the pursuit of political aims”, it’s difficult to see why the West would still consider the PKK or its affiliates terrorist organisations. For they have consistently condemned attacks on civilian targets; they’ve never attacked Western targets; and they’re only currently at war with the Turkish state because the latter destroyed promising peace talks in July 2015.

While prepared to return to the negotiating table, the PKK has accused Ankara in the past of “being more ready to negotiate with [Daesh] than Kurds”. And there have been numerous allegations suggesting this is true. In September 2016, The Canary reported on a high-level Turkish whistleblower alleging state sponsorship of Daesh. And Turkey’s response to SDF successes against Daesh in northern Syria in August 2016 was to send tanks across the border. Today, the Turkish regime’s commitment to fighting against secular left-wing Kurds continues to be much greater than its commitment to fighting against Daesh and other jihadi chauvinists.

As Macer Gifford stressed in a recent interview with the BBC:

The YPG is not a terrorist group… Our jets bomb in support of them. But the trouble is, we’re not giving any humanitarian support. We’re not giving them any political support. And foreign volunteers go out; they get the YPG on the news; they talk about the real issues on the ground; and help raise a very worthy cause to the international public.

Responding to continued insistence from the BBC interviewer about labelling the PKK and its Syrian allies as terrorists, Gifford said:

They’re a secular group. They’re not terrorists. ‘Cause terrorists are people that bomb and hurt civilians, which they’ve never done. These people are treated as liberators: by Sunnis, Arabs, Kurds, Yazidis… They’re part of the SDF, which is a major part of the American strategy to get rid of Isis. And this group believes in secular values. If we want a peaceful end to the Syrian war. If we want… the sort of Syria that both you and I and the people at home want to see – which is secular and democratic, then it’s groups like the YPG that Britain really should be supporting. And young men that go out there and join them should be treated as heroes…

Time for a rethink

The point isn’t that Britain or other Western countries should send troops into Syria and Iraq to defeat Daesh. It’s that we should be supporting progressive local groups on the ground that are already fighting day in and day out against chauvinist terror. Anti-Daesh fighters are dying every day on the front line. And the list of those lost occasionally includes foreign volunteers who’ve left their ordinary lives behind to support them. The very least we can do is to recognise the bold and inspiring sacrifice they’ve made; and not to treat them like criminals when they return home.

– See more Canary articles on Rojava, the PKK and Turkey.