US and Turkey clash over Syria strategy, after years of seeing eye to eye - Canary 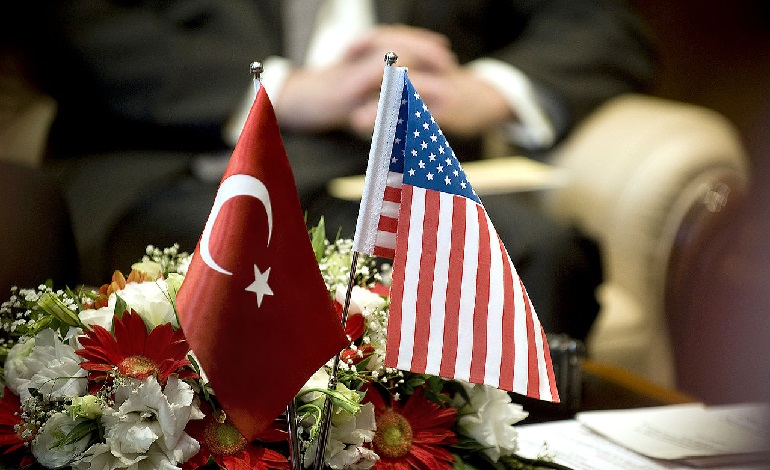 After years of seeing eye to eye on Syria, the disagreements between the US and Turkey are reaching fever pitch. And this could derail the fight against Daesh (Isis/Isil).

There are currently immense tensions between Turkey and the US. Reuters describes how the two NATO members are on a “collision course” over their strategies in Syria. Turkey, for example, wants to push back against the secular Kurdish-led forces of the YPG. But the US apparently wants to focus on the fight against Daesh, in which the YPG are the most effective local fighters.

Our demand from the U.S. and its new administration is to have the YPG leave Manbij as soon as possible… We have said that we would strike if the YPG fails to withdraw.

The YPG liberated the Syrian city of Manbij from Daesh in August 2016.

Certain forces are trying to gain ground in Syria through groups like the YPG… Before our friends and allies do something, they should think not once, but ten times over. They have to decide on who they will move forward with; it’s either Turkey or the terrorist organisations [i.e. the YPG].

The US sticks up for the YPG

Of those YPG fighters, I’ve talked to their leaders and we’ve watched them operate and they continually reassure us that they have no desire to attack Turkey, that they are not a threat to Turkey, in fact that they desire to have a good working relationship with Turkey… I have seen absolutely zero evidence that they have been a threat to, or have supported any attacks on, Turkey from Northern Syria over the last two years.

Pro-government Turkish daily Yenisafak, however, has argued that Turkey will use the Incirlik Airbase as a way to stop the US from backing the YPG, saying:

Turkey is prepared for possible scenarios with the YPG. Considering the logistical contribution to US air operations, the utilisation permit of Incirlik Airbase is an important leverage to convince the US against working with the YPG.

We could go into great detail on this, but the Syrian storyline should be very clear to most readers by now.

This is the clash that Syria is now facing. And if the Trump Administration picks Turkey over Kurdish-led forces, it could doom Syria to even further chaos in the future.