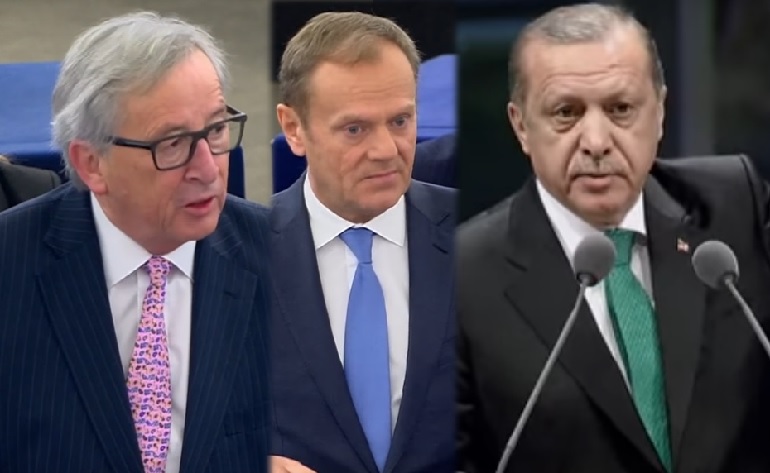 EU bosses Jean-Claude Juncker and Donald Tusk spoke out on 15 March about Turkish President Recep Tayyip Erdoğan likening the Netherlands to fascists. And this intervention came just as Erdoğan launched a new attack on the Dutch people.

Speaking at a European Parliament plenary session in the French city of Strasbourg on 15 March, European Council President Donald Tusk suggested Erdoğan was living in a world of fantasy. He said:

Rotterdam. The city of Erasmus. Brutally destroyed by the Nazis. Which today has a mayor born in Morocco. If anyone sees fascism in Rotterdam, they are completely detached from reality.

I will never accept this comparison between the Nazis and the [current European] governments… this is totally unacceptable, and the one who is doing this [Erdoğan] is taking distance from Europe and not trying to enter the European Union.

This final comment was in reference to Turkey’s decades-long attempt to join the EU.

After the Netherlands blocked a Turkish minister from visiting the Turkish consulate in Rotterdam recently, President Erdoğan likened the Dutch government to fascists, saying:

I thought nazism was over, but I was wrong. In fact, nazism is alive in the west.

This in spite of Erdoğan himself having forged an alliance in recent years with neo-Nazis back in Turkey.

to be called Nazis by a regime which is walking backwards in regards to human rights is just disgusting.

Other European governments have also clashed with the Turkish regime in recent days and weeks. This is in large part because President Erdoğan is currently seeking to further empower the office of the Turkish presidency. And ahead of a 16 April referendum on the issue, his government is trying to reach out to Turkish people living in Europe – whose votes could be crucial.

Countries standing up to Turkey may be doing so in part because Europe has a number of tense elections coming up itself. They may also be doing so because of the ongoing civil conflict in Turkey. The UN, for example, recently slammed Erdoğan’s regime for its crackdown on freedom of speech; and for the devastating effect its war has had on human rights in the country.

Turkey’s latest attack on the Netherlands

On 14 March, Erdoğan essentially said the Netherlands were responsible for the worst European genocide since World War Two. In a televised speech, he insisted:

We know the Netherlands and the Dutch from the Srebrenica massacre. We know how rotten their character is from their massacre of 8,000 Bosnians there.

In 2013, the Netherlands Supreme Court and the Hague ruled that the Dutch government had failed in its duty to prevent the 1995 Srebrenica massacre. But they didn’t hold the Netherlands responsible for the majority of the resulting deaths. While a lightly armed group of 110 Dutch UN peacekeepers failed to stop a Bosnian Serb force from entering a supposed safe haven, it was the latter that rounded up Muslim men and boys and executed them. In 2016, a UN tribunal found former Bosnian Serb leader Radovan Karadžić guilty of genocide for the massacre, sentencing him to 40 years in jail.

Current Dutch Prime Minister Mark Rutte responded to Erdoğan’s attack on the character of the Dutch people by insisting that the Turkish President’s Srebrenica claim was “a repugnant historical falsehood”. He also said:

According to the Washington Institute’s Soner Çağaptay, Erdoğan is simply “looking for ‘imagined’ foreign enemies” at the moment in order to “boost his nationalist base in the run-up to the referendum”. But in doing so, the Turkish President is worsening an already deteriorating relationship with the EU. And if he continues on this path, he won’t only endanger Turkish prospects of joining the EU. He could also do irreparable damage to Turkey’s close relations with its longstanding European allies.