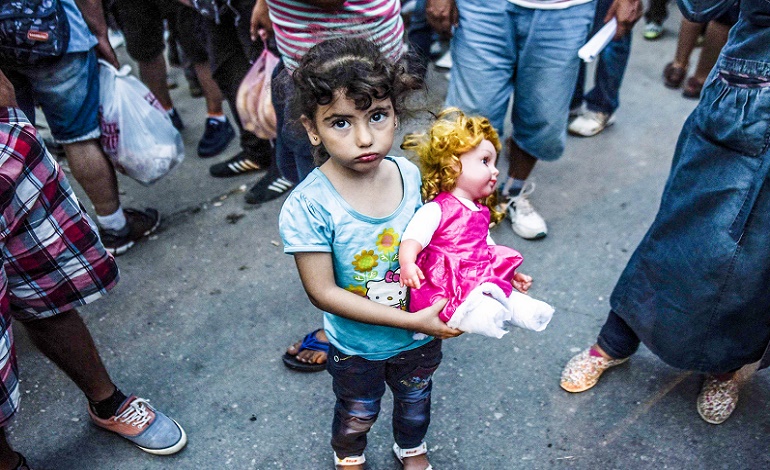 The co-leader of the Green Party has spoken exclusively to The Canary about his recent trip to Calais. And Jonathan Bartley says he witnessed first-hand a child refugee crisis that has all but been forgotten by politicians and the public.

Back to the jungle

As The Canary previously reported, the so-called ‘Calais Jungle’ was demolished in October 2016. Around 9,100 people, including at least 865 children – 78% of them unaccompanied – were living in squalid conditions near the Channel Tunnel. The reason for the camp’s demolition, French authorities say, is to properly deal with people’s asylum claims and house them in better conditions.

But on 6 March 2017, Bartley went to visit the north of France. And what he found shocked and distressed him.

Speaking to The Canary, he said:

It’s the second time I’ve been back to Calais. I was there before the clearance of the jungle camp and I wanted to go back and see what the situation is now. Because we said at the time, ‘if you destroy the Calais camp, where are these children going to go, now?’ We were told various stories about the children. When the camp was cleared, some were obviously conned into getting on the departing buses by being told that they would be sent over to the UK to join families if they did. But they were in fact taken to centres, and those centres have now kicked them out. And remember, a lot of children went missing before the jungle camp was even destroyed.

Bartley said that when he went back in March, he found many of the same children sleeping rough on the streets. “And it was cold,” he recalled. “It was really cold. We gave out food to them about 9pm at night.” Bartley is adamant that the children he saw, contrary to tabloid speculation, were clearly 14 and 15-year-olds. And he says their treatment at the hands of the French police has been nothing short of “abuse”:

While they were in the camp, the children had their sleeping bags taken away by police, who would also beat and teargas them. But now there’s no camp, they’re even more vulnerable, on the streets and being again abused by the police and the French authorities. The Mayor of Calais put an exclusion zone around the camp where the jungle used to be, saying the volunteers on the ground can’t go and give them food. And the authorities have been intimidating and threatening them.

He resignedly says that, “at every turn”, the police and authorities are letting children down. They are being driven into the arms of traffickers, or in desperation onto lorries to try and reach their families in the UK. But Bartley also notes that the volunteers are struggling to meet the demand they face. At first, when the jungle was there, people were sending money, clothes, sleeping bags, and all manner of practical things the volunteers could give to the children. But as the press left and the politicians turned a blind eye, so the donations dried up.

A beacon of hope?

But it’s not like this across the whole of northern France. Bartley also visited a camp in Dunkirk. And he said things there are markedly different:

There’s a positive story there, insomuch as Dunkirk has a Green mayor. So they have made the camp more established. Médecins Sans Frontières set up all the infrastructure for the camp; for example, we visited a small school there. It’s clear also, though, that children have just been left to rot in this camp as well.

But on 15 March, the French government said that it wanted the Dunkirk camp demolished. It looked like it hadn’t even consulted with the town’s mayor, Damien Careme, who said he was “very surprised” and “didn’t agree” with the decision. And Bartley echoed that sentiment, saying that the people there were “fleeing from conflict”, and that “the idea that because there’s a camp there it is somehow drawing people to the UK is nonsense”.

Bartley has a simple message for both the Home Secretary and the Prime Minister, over the crisis facing children in northern France:

Amber Rudd and Theresa May should go and look into the eyes of the children, and explain to them what they’re doing. Especially with the vote against the Dubs amendment a few days ago – go and explain to these children what you’ve done.

And he also has a straightforward solution to the situation:

There was a wonderful quote in Time Magazine last week: ‘If you want to solve the refugee crisis, stop creating refugees’. That basically comes down to it. Let’s stop the commercial arms exports that are fuelling these conflicts. Let’s put the aid into these places, and let’s put money into solutions at the point where these conflicts are being created. Where’s the plan for Syria? What’s happening with Eritrea? What’s happening with the huge famines that we are now seeing emerging, and are reaching crisis point?

When I interviewed Bartley, it was on a side street off the main building of the London School of Economics. We were both there to support a strike by its cleaning staff. But unlike most politicians, he didn’t simply say his piece and run from the demo. He stayed, listened to people’s testimonies, spoke to the striking cleaners, and seemed genuinely engaged with what they were doing. And the same can be said for his involvement in Calais. It’s not soundbites and platitudes coming from Bartley’s mouth. It’s the words of someone who seems to genuinely give a sh*t. He said:

We’re the fifth or sixth richest country in the world, but less than fifty miles off our coast there’s a refugee crisis and we’re doing nothing to solve it. The 350 children we’ve taken in, we’ve done so begrudgingly. And under the Dubs amendment, we should have taken thousands. But we are just leaving them. Washing our hands of them. And the best we can do? Build a two-mile wall costing millions. Money that could have been put into providing a solution for these children. It is a scandal how we have come to this as a country, where we are so inward looking, so numb to the needs of what’s going on. It’s a national scandal and we should be shouting this from the rooftops.

The smallest of moments

If people want to practically help, they can firstly give money. Bartley says there are lots of organisations out there; you can find them on the internet and Facebook. He says that if you can’t give money, you can give food. There are trucks going out there. And you can write to your MPs to keep this on the public agenda. And in Bartley’s own words, you can “kick up a stink about it”.

But it’s often the smallest, seemingly insignificant moments in times of crisis that are emblazoned in our memories for the longest. And one moment in Dunkirk stood out for Bartley:

I met a six-year-old boy from Iraq in Dunkirk’s children’s centre. This child, for whatever reason, doesn’t engage really with the world around him; he’s really shut off. So I sat down and started doing a puzzle with him. And every time I put my thumb up when he got a piece right, so he put his thumb up too. The teachers said that this was a break-through for him. That for the first time that last week, he had started to respond. And I just thought, ‘if only he had the support and educational provision we have in the UK’. This child could really be invested in, brought up and helped. But he’s going to be left there for months, possibly years, without support. And that’s going to affect him for the rest of his life.

However much both the French and UK governments would like them to, the children of Calais and Dunkirk won’t simply vanish all at once. Many will, over the course of time, but the situation can’t be resolved by putting up walls and allowing police to treat these youngsters like criminals. Nor, sadly, will either government willingly attempt to humanely resolve the appalling conditions these children are in. It is, as is often the case, down to the public to step in. And Bartley perhaps summed it up best:

We are so inwardly focused now, with everything that’s going on with Brexit. It’s like we are turning in on ourselves and forgetting about our responsibilities 50 miles away. Because this issue isn’t going away. And we can’t wait for the next tragedy for people to suddenly start caring. It will be too late.

– Find out how you can help the refugee children of northern France.

– See more on the refugee crisis at The Canary Global.