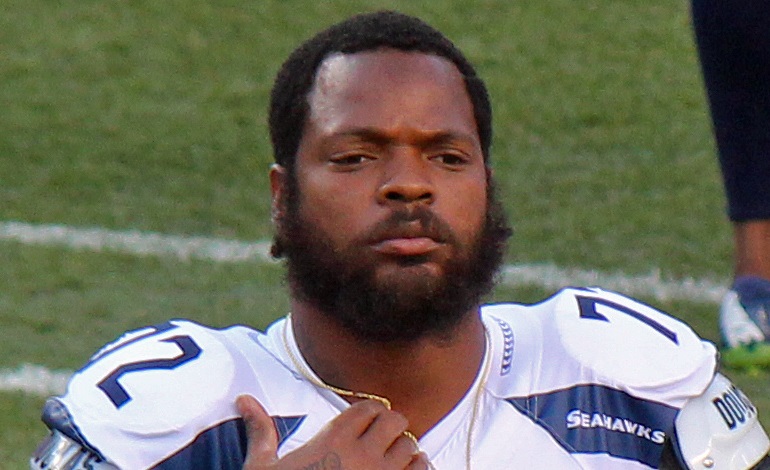 American football player Michael Bennett has been making headlines recently. But not because of his sporting achievements. Instead, he’s been setting a powerful and positive example for all other sport stars to follow.

Support for minority communities in the US

On 9 March, Bennett announced his plans to donate all his endorsement earnings in 2017 to charity. He said the money would go to:

Half of the proceeds from jersey sales, meanwhile, would:

go to programs and initiatives to support inner-city garden projects… to help provide the right nutrition and access to healthy living to all.

And he signed off by calling on other sport stars to join him, saying:

I’m asking all professional athletes to join me by donating a portion of your endorsements this year to a cause of your choice. We can make a difference. It’s up to us to help plant seeds of hope and help fuel the future.

Power to the People

On 8 March, meanwhile, Bennett wrote a column for The Players’ Tribune in support of the Women’s Strike. Expressing “unconditional solidarity” for the protest, he said:

As a black man in America, I sometimes get overwhelmed and discouraged by what I see — from the police killings of unarmed black men, to the unequal educational system, to the mass incarceration of poor people of color in for-profit prisons. But when I look in my daughters’ eyes, I see the courage of Harriet Tubman, the patience of Rosa Parks, the soul of Ida B. Wells, the passion of Fannie Lou Hamer and the heart of Angela Davis… And I’m inspired because it will be women who lead the future.

But his support wasn’t just because he has three daughters:

And he stressed his agreement with the unity statement from the strike’s platform, which described how it was:

organized by and for women who have been marginalized and silenced by decades of neoliberalism directed towards working women, women of color, Native women, disabled women, immigrant women, Muslim women, lesbian, queer and trans women.

To conclude, he encouraged his fellow football players stand alongside “these brave women” too, insisting that:

In addition to his support for women and US minority communities, Bennett also hit the headlines earlier this year for cancelling a trip to Israel. In a letter posted on Instagram, he stressed that he didn’t want the Israeli government to use him as an “influencer and opinion-former” for its own propaganda purposes.

An article in The Times of Israel, he said, had swayed his decision. This piece quoted Strategic Affairs and Public Diplomacy Minister Gilad Erdan as saying that the visit of American football players would be part of “an intensive fight against the delegitimization and BDS [Boycott, Divestment and Sanctions] campaigns against Israel”.

I want to be a ‘voice for the voiceless’ and I cannot do that by going on this kind of trip to Israel.

He also asked other players to not go. And some followed suit.

He then finished the letter by insisting:

Like 1968 Olympian John Carlos always says, ‘There is no partial commitment to justice. You are either in or you’re out.’ Well, I’m in.

You can see Bennett talk about his decision not to go to Israel, among other issues, in the following interview with Democracy Now!

With all of Bennett’s words and actions recently, he has quickly become one of the most outspoken sport stars in the US. And the example he has been setting for other athletes is positive, progressive and powerful.

– Read the transcript from Bennett’s interview with Democracy Now! here.

– Also see more from other outspoken NFL players at The Canary. And check out more Global articles on Facebook and Twitter.