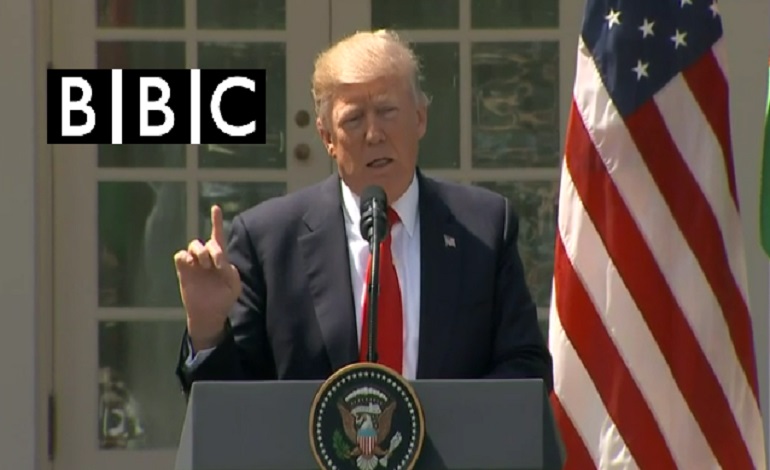 The BBC has been caught removing opposing views from its coverage of Syria. The comments it edited include analysis of the alleged chemical weapons attack on Khan Sheikhoun. And the revision ended up favouring Donald Trump’s knee-jerk military action.

The website ‘NewsSniffer’ documents edits made to web articles. And one from the BBC entitled Syria ‘chemical attack’: Trump condemns ‘affront to humanity’, published on Thursday 6 April, was found by the website to have had 10 edits. But one stands out in particular.

A version that appeared at 11.00 Coordinated Universal Time (UTC) on 6 April contained the following passage (highlighted in pink): 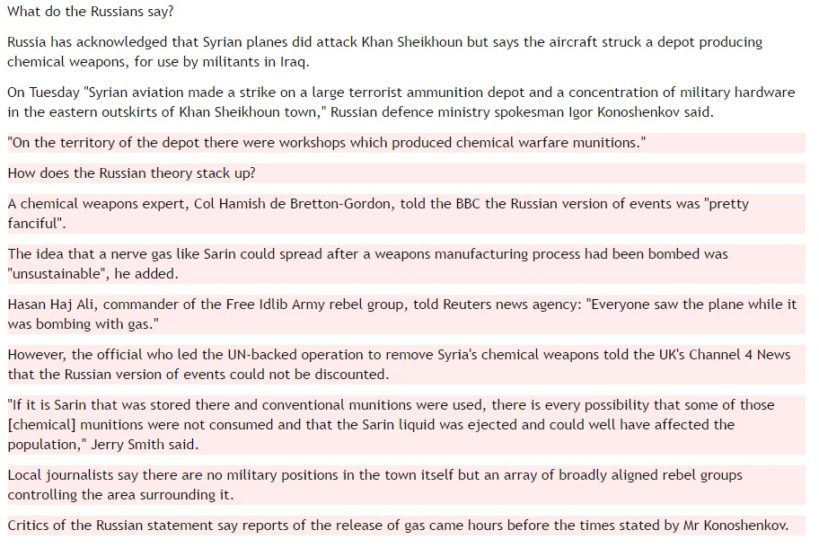 But the BBC removed this whole section at 11.35 UTC.

The Channel 4 News interview mentioned in the text above was broadcast on 5 April. Jerry Smith said, further to what the BBC quoted:

We need to be very conscious of all… playbooks that are being put out there at the moment. I think it’s very premature if we start dismissing one accusation or another. What is clear from the video that I’ve seen is that people are suffering from some kind of intoxication. It would also appear that some of the signs and symptoms they have are consistent with nerve agents. Obviously, with the doctor there, if they are responding to nerve agent treatment, that would indicate that that may well be the cause of the poisoning.

It’s too early really to tell about the scenarios. They’re basically either Syrian jets hit a store; and I don’t agree with your reporter that reported earlier with regards to the fact that that would absolutely consume all the Sarin – that’s not the case at all… Of course, that conventional attack would still… open up a whole bunch of questions of why the Sarin was there; what it was doing there; who made it; and also, why would Syria consider attacking a known chemical site with all the downstream issues of threatening a local population.

Jon Snow then asked if it was possible that the rebels could have chemical weapons. Smith said:

Well, potentially… Sarin is not an easy material to manufacture. But at the same time, it is not beyond the realms of possibility. Particularly some of the opposition groups out there, and particularly referring to Daesh, may well have a chemical weapon capability. But there are other options as well. It could have come from part of the original Syrian stockpile. But that in itself, then, would raise questions of why that wasn’t declared in the declarations in 2013 or subsequent amendments.

Smith concluded by saying that his team saw nothing to suggest that the Syrian government hadn’t cleared all its chemical weapons; although there are still “ongoing declaration issues”.

On 4 April, at least 80 people died in the suspected chemical attack. The anti-Assad opposition and Western powers claim the Syrian government was responsible.

The UN, however, stressed that it was “currently not in a position to independently verify” reports of chemical weapon usage in Syria. The Syrian government, meanwhile, denied responsibility for the attack. And its Russian allies claimed a government shell had hit a building where the anti-Assad opposition was making chemical weapons. Something the rebels in turn denied.

A spokesperson for the BBC told The Canary:

We have widely reported international condemnation of this atrocious attack. As this significant story developed we simply edited it into multiple pieces. The updates are nothing more than straight forward journalism and it would be seriously misleading for the Canary to suggest otherwise.

But a search of the BBC website for key sentences from the section that was removed produced no results.

There are numerous debates and disagreements over the Syrian conflict, and the events this week. But the BBC, a public service broadcaster, has a duty to present all sides of the argument. By apparently removing a respected and well-versed voice on the subject at hand, it merely opens itself up to criticism. And it also does a disservice to the public, who deserve a balanced account of the situation.

This article was updated at 9.40pm on Friday 7 April. The Canary would like to note, as a gesture of goodwill, that Media Lens uncovered the information regarding the BBC on Thursday 6 April. But it was not the source used for The Canary’s article.

– Please support The Canary if you appreciate the work we do.