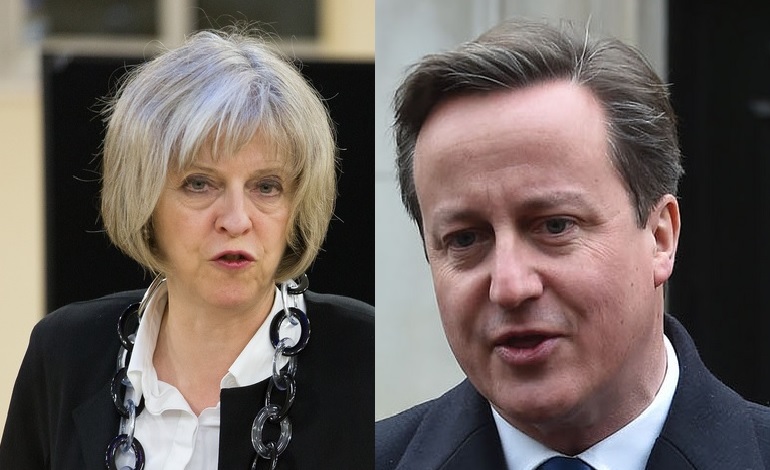 New research from leading academics has laid bare exactly how our electoral system is failing us, leaving it wide open to corruption, fraud, foreign interference and abuse. But, while The Guardian published an in-depth story on the report, other media outlets ignored it.

A new report [pdf] from the London School of Economics (LSE) has warned that Britain’s electoral system is broken. The culprit? Facebook, and other social media “gatekeepers” that can inadvertently help political parties to obscure campaign spending and subvert democracy.

We don’t have a system that is working any more. In this country, we have had laws to control spending by political campaigns but online campaigning has changed everything and none of the existing laws cover it. The ability to throw around large amounts of cash is almost completely uncontrolled…

There is a real danger that public trust in the democratic process will be lost. There is real potential for foreign influence. We have now the ability to manipulate public opinion on a level we have never seen before. And the current framework is weak and helpless.

Most of the media failed to publish the findings. But the implications are critical. Two common themes have united most recent elections:

Firstly, they’ve surprised the pundits. Commentators were sure the 2015 general election was headed for a hung parliament. They thought Remain would win the EU referendum. And they were certain Donald Trump could not win the US election.

During the 2015 general election, the Conservative Party spent £1.2 million on Facebook advertising, compared to Labour’s £16,454. Many of those ads targeted people by constituency: 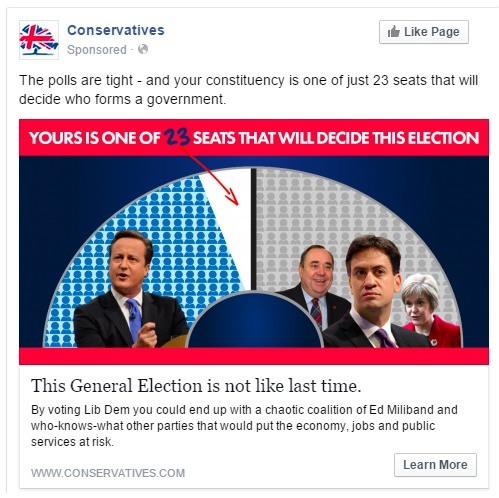 In fact, they went way deeper than just targeting constituencies as a whole. In an article headlined “Secrets of the Tories’ election war room”, The Telegraph reported that the Conservatives were able to target “small groups of undecided voters, for example, women in their 40s who were concerned about schools and GP opening hours, in specific districts of key marginal seats”.

Facebook itself boasts that it allowed the Conservatives to reach more than 80% of Facebook users in marginal seats: 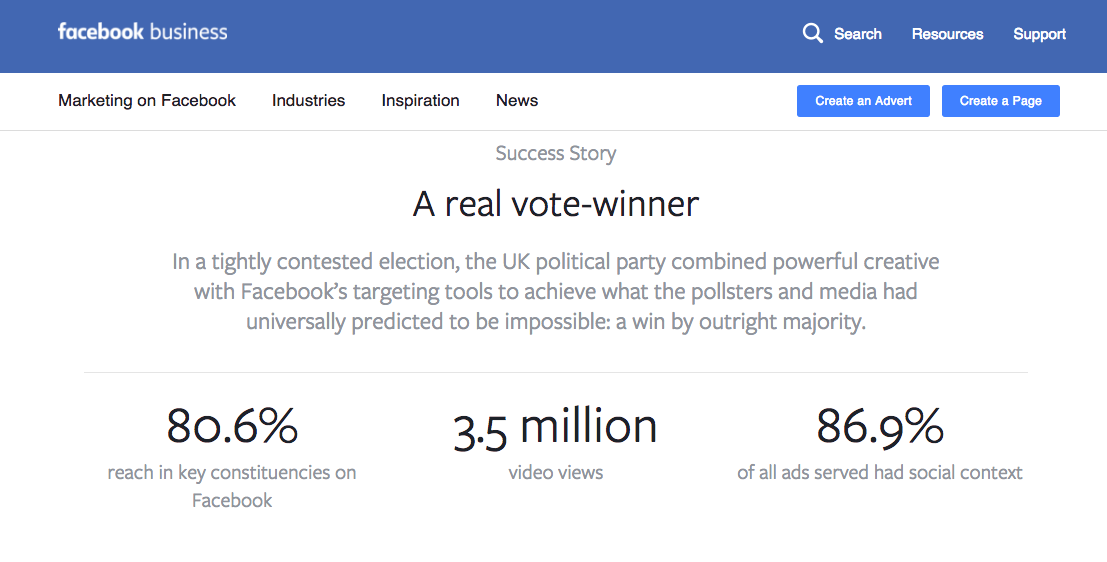 The Conservative Party’s Digital Director, Craig Elder, claimed that targeting made a “demonstrable difference” to the election result: 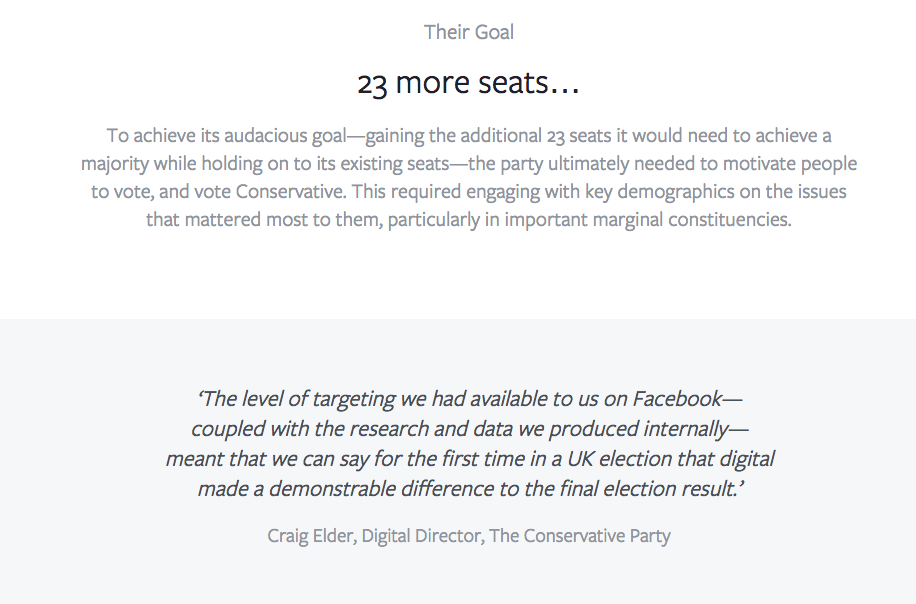 Nobody noticed because targeted Facebook ads are invisible to the population at large. Unlike posters or newspaper adverts, pundits don’t see them. Rival political parties don’t see them. Only those the ads target can see them.

A dozen police forces are currently investigating Conservative MPs over allegations of electoral fraud relating to the way they declared campaign spending. The party was also recently fined £70,000 by the Electoral Commission for multiple breaches after it found the party failed to accurately report how much it spent on campaigning.

Now the LSE has warned [pdf] that Facebook targeting opens the door to electoral fraud:

The ability to target specific people within a particular geographic area gives parties the opportunity to focus their attention on marginal voters within marginal constituencies. This means, in practice, that parties can direct significant effort – and therefore spending – at a small number of crucial seats. Yet, though the social media spending may be targeted directly at those constituencies, and at particular voters within those constituencies, the spending can currently be defined as national, for which limits are set far higher than for constituency spending.

The Canary asked the Conservative Party whether any of its Facebook advertising promoted local candidates but received no response.

The LSE also looked at spending by the Vote Leave campaign during the EU referendum. The campaign used around 1 billion targeted ads, mostly on Facebook. The report [pdf] says:

According to campaign director of Vote Leave Dominic Cummings, the official campaign to leave the EU in the run up to the referendum ‘put almost all our money into digital (~98%)’.

Cummings pointed out [pdf] that the campaign faced no media scrutiny over its spending:

it is actually hard even for very competent and determined people to track digital communication accurately, and it is important that the political media is not set up to do this. There was not a single report anywhere (and very little curiosity) on how the official Leave campaign spent 98% of its marketing budget. There was a lot of coverage of a few tactical posters.

Meanwhile, Arron Banks, the co-founder of Leave.EU, which is under investigation by the Electoral Commission, said:

We were just cleverer than the regulators and the politicians. Of course we were.

Banks insists Leave.EU didn’t break the law; it just “pushed the boundary of everything, right to the edge”.

Again, this campaigning was hidden from the public eye. Wired adds:

Because Trump wasn’t spending as much on television all along, it seemed like his team wasn’t investing in changing anyone’s minds. But they were: they were just doing it online.

59% [pdf] of internet users in Britain, or 48% of the population, regularly use Facebook: 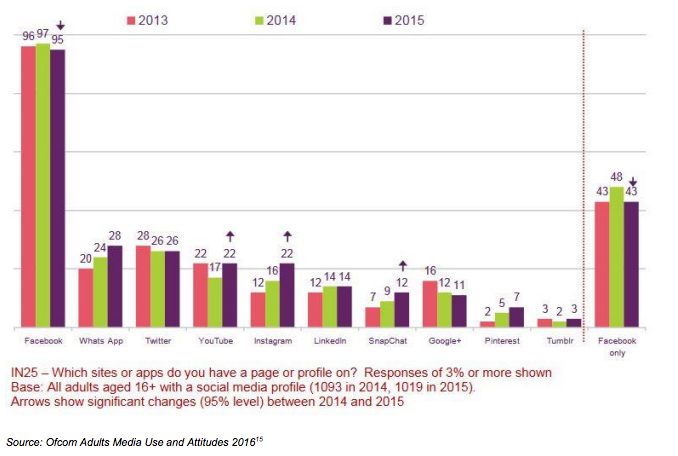 Its soaring popularity means that political parties are able to reach voters directly, and without transparency – on a scale that has been impossible to date. This raises profound questions for democracy. Tambini says:

It is urgent. There could be a wholesale loss of trust in the process as the result of a scandal or swinging of an election. Though some would argue that has already happened. There has to be a principle of transparency. The public needs to know where the money is coming from. And we don’t.

The LSE report [pdf] calls for an urgent independent review of campaign regulation. This, it says, “should be a holistic review taking into account both broadcasting regulation and spending regulation”. In the short term, it says, the Electoral Commission’s statutory duties should be updated.

Britain has regulated candidate spending in elections since 1883 [pdf], for one very good reason: to stop the wealthy from buying their way into power. Democracy depends on that regulation.

And it can’t punish transgressors beyond issuing a fine, which campaigns can simply cost into their spending.

A robust regulatory regime should aim to promote fairness and transparency; part of this relies on the effective deterrent of proportionate sanctions. We are therefore calling for the limit of £20,000 on fines which the Commission can levy, to be reviewed and increased to ensure proportionality with the sums that are being raised and spent in UK-wide elections and referendums.

Top academics are saying our system is broken. The elections regulator is saying it needs more powers. Most of the mainstream media is failing in its duty to report on these fundamental threats to democracy. If we value our democracy, we need to fight for a radical overhaul of campaign regulation. But unfortunately, right now, the only party with the power to do that is itself under investigation for electoral fraud.

The Canary contacted the Conservative Party for comment but had received no reply by the time of publication.

– Read The Canary’s previous stories on the election expenses scandal.