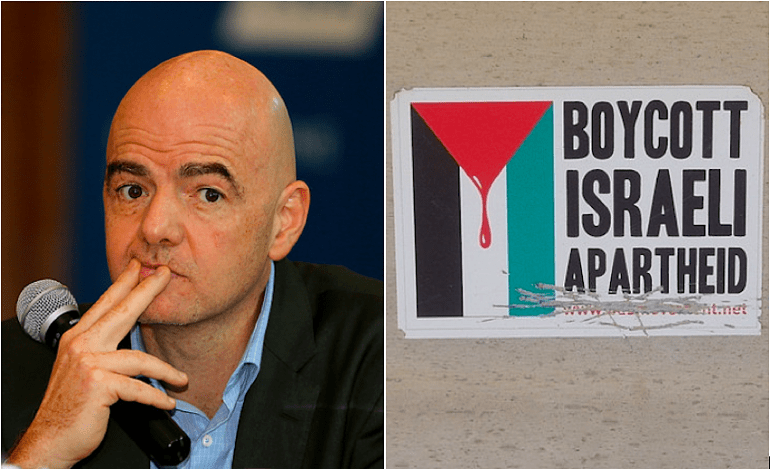 Disappointment hit the 67th FIFA Congress on Thursday 11 May. International football’s highest body delayed a fundamental vote for Palestinian football, which some have said is the result of “corruption and nepotism” at the top between FIFA and the Israeli heads. But Palestinians are taking the matter further and going to sport’s highest body instead.

The Palestinian Football Association (PFA) along with campaigners had urged FIFA to ban Israeli clubs that are based in illegal settlements on occupied Palestinian land. But FIFA President Giovanni Infantino’s proposal to delay a vote on the ban until March 2018 was approved by the congress. The decision said this would give the monitoring committee tasked with trying to resolve the issue a nine-month extension to find a solution.

Tokyo Sexwale, the head of FIFA’s monitoring committee, submitted a report on the matter in March 2017. But it was rejected by the Israel Football Association (IFA), which described it as “politicized and fundamentally flawed”. The IFA added that the settlements are not on ‘occupied land’ because there are competing claims to the land. But the UN disagrees, stating that Israel is an “occupying power” and that all settlement activity must cease.

Straight to the top

Susan Shalabi, Vice President of the PFA, told The Canary:

We fear Mr. Infantino’s action has set a precedent, where governments decide the agenda for a FIFA congress. And that violations of the statutes and misuse of its legal devices become so common, they encourage football to be used as a tool to normalise oppression.

We will pursue this matter in the Court of Arbitration in Sport (CAS), because we consider the way in which our proposal was overthrown by Mr. Infantino illegal, and an additional violation of the FIFA statutes and standing orders of the congress.

The CAS is a body independent of any sporting federation or association. It’s there to mediate sports related disputes, often used in football to dispute suspensions, sanctions and transfer bans.

The PFA will determine whether FIFA is playing fair with its latest decision. FIFA’s own rules (Article 72.2) state member associations and their clubs may not play on the territory of another member association without the latter’s approval. And in international law there is no ambiguity over the illegality of Israeli settlements.

The monitoring committee was set up in 2015 after the 65th congress. The PFA placed the motion to suspend the IFA from FIFA on the agenda for violating FIFA rules and actively curbing Palestinian soccer activities.

Task committees were set up to resolve problems between the two associations, but these failed. These problems included the restriction of movement on players and equipment and action against players and on places of practice and competition. Israel has on occasion explained away these tactics under ‘security concerns’.

In addition, Palestinian players regularly face abuse. While teams on Israeli settlements flout international law. The PFA has tried to co-operate. But this latest delay seems nonsensical. As Shalabi says, the mandate of the monitoring committee set up in 2015 was supposed to end with the presentation of the report.

The delay was considered a ‘win’ by Israel. As IFA’s Chairman Ofer Eini said:

We have good and loyal friends in FIFA. I don’t have enough words to thank them for firmly standing by our side…

Shalabi says they have 21 days to take Infantino’s decision to the CAS. After years of FIFA’s delaying tactics to stop football being used in Israel’s political goals, it is the perfect comeback to the free pass that FIFA is throwing to Israel.