Corbyn’s been honest about the causes of terrorism, and it turns out the public agrees with him [OPINION] - The Canary 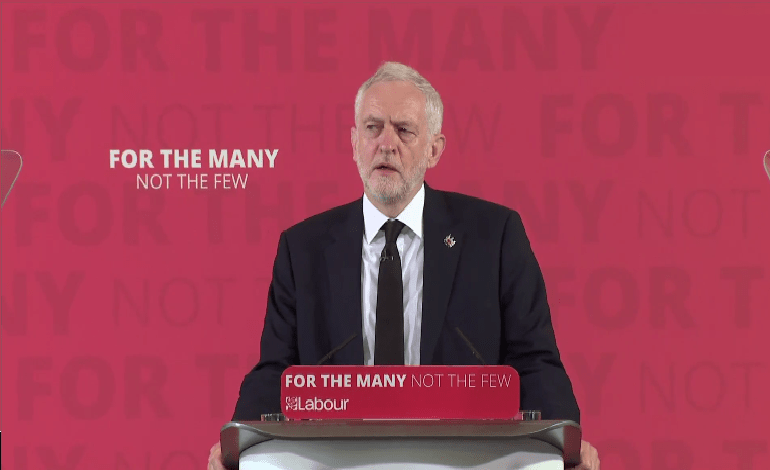 In his landmark speech following the 22 May attack on Manchester, Jeremy Corbyn dared to honestly mention all the reasons for terrorism on British soil. In addition to underfunded security services and the attacker’s own twisted ideology, Corbyn highlighted what he, intelligence officials [pdf] and foreign policy experts had all been saying for over a decade, up to and right after Manchester; that regime change wars in the Middle East have helped the terrorists. Predictably, though, Tory politicians and the corporate media continue to stick their heads in the sand and slander anyone who disagrees.

However, the public agrees with Corbyn

Despite the attempts of Corbyn’s opponents, polling has revealed that the public actually sees through the gaslighting. 53% believe that foreign policy is at least in part responsible for terror attacks on British soil. Only 24%, meanwhile, believed that foreign policy played no role.

In a desperate panic, the Tories have resorted to smearing Corbyn, often with the falsehood that the Labour Party leader is saying Manchester was just about revenge for foreign policy. But this is only one of the several causes he has mentioned. Another more damning one is that the Tories’ and New Labour‘s foreign policies literally helped extremist groups in the Middle East to establish strongholds.

The Tories and New Labour

Corbyn’s judgment on international security matters has been spot on for decades. Theresa May’s has varied between non-existent and terrible. Corbyn not only voted against but fought against Tony Blair’s illegal invasion of Iraq. Even former Bush Administration officials admit that Daesh (Isis/Isil) would not exist if the war had not occurred. The group which claims to have murdered our children in Manchester exists because politicians like Blair and May wholeheartedly supported the invasion and voted for it in parliament.

Just let that sink in. It should be the biggest news story of the decade.

If that wasn’t enough, David Cameron (with May as Home Secretary) harangued the country into overthrowing Muammar Gaddafi in Libya, based on bad intelligence. If humanitarian concerns had been the actual reason for Cameron’s war, NATO would have stopped action after the feared assault on Benghazi was prevented. But instead, Cameron and co undertook regime change. And today, Libya is a Mediterranean base for both Daesh and al-Qaeda. And it’s a base where the Manchester bomber apparently undertook training just before popping back home to unleash carnage upon the children of Manchester.

The same media that cheer-led both these wars and demonised anyone who didn’t, however, now deny all of this. And worse, they help the Tories smear Corbyn for pointing out the causes, calling him an apologist for terrorism. Consider how ridiculous this is and how it would not stand in any other field of inquiry other than national security.

It’s like a detective being accused of excusing the criminal because he mentions all the factors that led to the crime occurring. It’s like a doctor saying to a dengue patient that their disease and the prevalence of mosquitoes in their home is due to the open water tank in their backyard, only for the doctor to be accused of being an apologist for mosquitoes. Or it’s like a medical researcher pointing out the causes of cancer, only to be labelled an apologist for cancer.

An insult to the victims

The media’s smears are not only false and absurd. They are dangerous. They allow the Conservative government to embark on the same disastrous wars over and over again, ensuring more Manchesters in the future. But worst of all, they are an insult to the victims.

With the new poll, however, we finally have proof that ordinary people aren’t falling for it anymore. They see the multifaceted reality of terrorism.

It’s time now for a government that does the same.