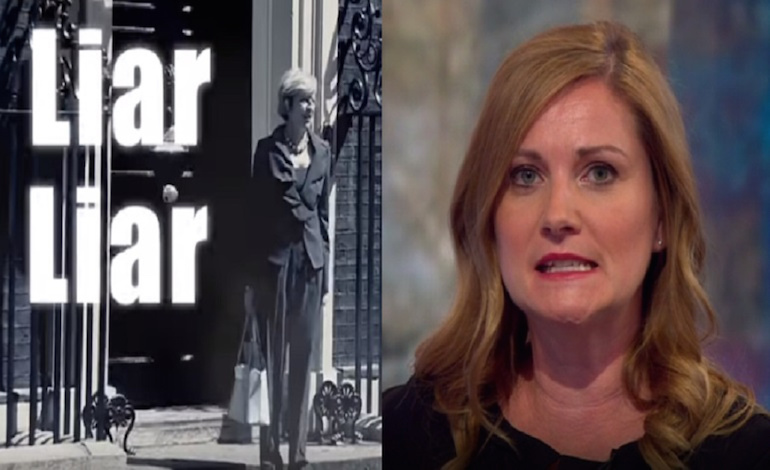 The artist behind the hit anti-Tory single Liar Liar GE2017 has told The Canary that the BBC told him “not to go too heavy on the Tories” and “not to mention” a planned demonstration before he went on the Victoria Derbyshire show. The founder of group Captain SKA left the show’s presenter floundering, as he dropped a truth bomb about the broadcaster’s apparent bias live on air.

On Friday 2 June, Jake Painter was being interviewed about the group’s song on Victoria Derbyshire. Host Chloe Tilley was discussing the reasons why broadcasters had refused to play Liar Liar GE2017. And then, Painter suddenly exposed something the BBC probably hoped would remain quiet:

Before I came on, your editor asked me not to go too heavy on the Tories.

To be fair, that once again falls into what Kevin is saying because, you know, if we’re going to have someone on here who does an anti-Labour song, and an anti-Lib Dem song, an anti-Green song, an anti-UKIP song, d’you see what I mean? It’s all about that impartiality.

Please be nice to the Tories!

A BBC editor asked me ‘not to go too hard on the Tories’, as they had to be balanced on the show. And they also said I was not to mention our Radio 1 protest that’s happening today, ‘for health and safety reasons’. I found it hard to get a word in during the show. But I’m glad I got my points across.

The protest Painter refers to is one organised by the People’s Assembly. It was due to take place outside Broadcasting House in London on Friday 2 June. The group had organised a protest/party over the BBC‘s refusal to play Liar Liar GE2017. But as Painter pointed out on Victoria Derbyshire, there is a deeper problem with media bias at play.

He told [1.39.30] host Tilley that he was “horrified” that broadcasters hadn’t played Liar Liar GE2017. But he thought there was a reason for this:

When you look at the bias in the media, not just the BBC but wider media in general… towards the Tory Party, there’s been so many studies on this, LSE, Cardiff University, Birkbeck, [the media is] massively weighted…[to] Tory policies…

Painter and Captain SKA are going to be circumventing the mainstream media to get Liar Liar GE2017 out there. On Wednesday 7 June, they’ll be playing at Brixton Jamm in South London. The 10-piece act will “be playing a set packed with dance floor filling protest tunes to keep you thinking and dancing your way to the election”. You can find out more here.

And Painter is right. One such study by the London School of Economics (LSE) claimed the press turned into an “attack dog” against Corbyn. It said 57% of articles in the press were critical of Corbyn, 74% distorted his views, and 56% did not give the Labour leader a voice at all.

Also, a study by the The New Statesman appears to confirm this bias. It did analysis into the broadcasting of the EU referendum campaign by looking at the main evening bulletins on Channel 5 (5pm), Channel 4 (7pm), and BBC, ITV, and Sky News (10pm). It found that 71.2% of the media’s political sources were from the Conservative Party. This compared to just 18.4% from Labour.

And if this wasn’t bad enough, Reporters Without Borders recently said the UK has now slipped to 40th in its Press Freedom Index.

Broadcasters do have set impartiality rules during election periods. But the BBC especially also has a duty to us, as a public service broadcaster; although credit should be given to Victoria Derbyshire for at least playing a segment of Liar Liar GE2017. The media’s refusal to play the song, whatever their reasons, will only serve to compound the impression in much of the public’s minds that our press, far from being free and fearless, is little more than an organ of the Conservative Party machinery.