The BBC won't play 'Liar Liar'. So people have taken matters into their own hands [VIDEO] - The Canary 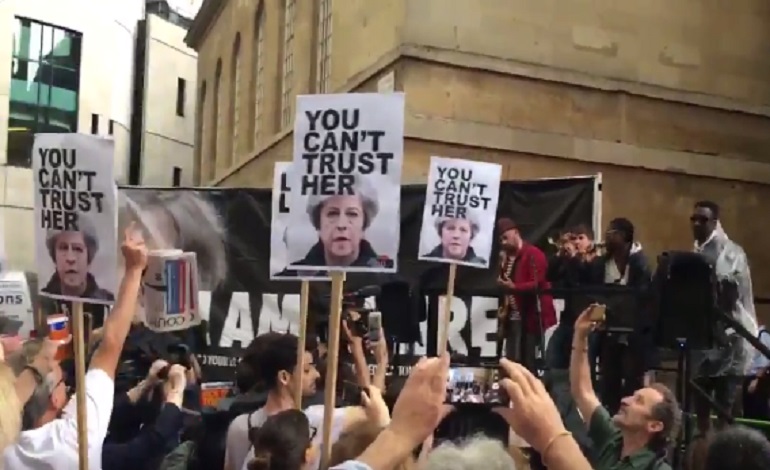 Captain SKA’s track Liar Liar GE2017 is now at number four in the UK Top 40 chart. But BBC Radio One has refused to play the song, due to impartiality rules. So people have taken matters into their own hands, making sure that everyone at the BBC heard that Theresa May is (allegedly) a “liar”.

On Friday 2 June, The People’s Assembly organised a demonstration-come-party outside Broadcasting House, just off Oxford Street in Central London. It said in a statement that:

BBC Radio One has said ‘…our editorial guidelines require us to remain impartial and the UK is currently in an election period so we will not be playing the song’. The BBC has been anything but impartial throughout the election campaign with a constant bias in favour of the Conservatives.

Captain Ska’s Liar Liar GE2017 is a scathing attack on the Conservative’s record in office, attacking the Tories over food banks, the NHS crisis, education funding crisis and a drop in living standards. For an unsigned band to make it this far in the charts shows the huge public opinion growing against Theresa May and her government – we demand this opinion is given it’s fair play on the airwaves!

Can you hear it now?

And the People’s Assembly’s demonstration didn’t disappoint, as Liar Liar GE2017 was blasted out right outside Broadcasting House:

The @BBC refused to play #LiarLiar at number 4 on the charts, so we played it for them! She's a Liar Liar! pic.twitter.com/wdV6NNxKOa

But the track was also played outside local BBC offices across the UK, including in Nottingham:

#LiarLiar being played outside #bbc east midlands 😂 complete with someone dressed as Theresa May?? pic.twitter.com/PHKDagot1F

As The Canary previously reported, the BBC seems intent on censoring Liar Liar GE2017 as much as possible. Because on Victoria Derbyshire on Friday 2 June, the founder of Captain SKA Jake Painter revealed to The Canary that the show’s editor had told him:

‘not to go too hard on the Tories’, as they had to be balanced on the show. And they also said I was not to mention our Radio 1 protest that’s happening today, ‘for health and safety reasons’. I found it hard to get a word in during the show. But I’m glad I got my points across.

The protest song is back

As a result, Captain SKA has decided to circumvent the mainstream media to get Liar Liar GE2017 out there. On Wednesday 7 June, they’ll be playing at Brixton Jamm in South London. The 10-piece act will “be playing a set packed with dance floor filling protest tunes to keep you thinking and dancing your way to the election”. You can find out more here.

The People’s Assembly protest shows that, whatever the media throw at the left, it will always find ways to circumvent it. What Captain SKA’s Liar Liar GE2017 shows, meanwhile, is that the art of the protest song has made a welcome return. And it’s done it in the most spectacular, if controversial, of ways.