Theresa May is misleading disabled people about the ‘dementia tax’. And she is not telling them about her plans to abolish school dinners. Because neither policy appears in the party’s easy-read manifesto [pdf] aimed at helping people with learning disabilities understand the document.

All the main political parties, apart from UKIP, have published easy-read versions of their manifestos. The Conservatives were the last to publish theirs, releasing it just a week before the election. The easy-read format is designed to make information accessible [pdf] to the 1.5 million people in the UK who have learning disabilities.

Learning disability charity Mencap has produced guidance for easy-read guides. These include pointers [pdf] which are clearly very hard for the Conservatives:

Use clear and simple text (plain English) with short sentences, simple punctuation and no jargon.

The guide also advises writers to cut out [pdf] unnecessary detail. But this didn’t stop the Conservatives starting their document with a text-heavy message from Theresa May.

May’s plans to introduce a ‘dementia tax’ have been widely criticised. Under the proposals launched in the manifesto, those who need care will be charged after they die if their estate is worth over £100,000. And that valuation will include the person’s home as well as any savings.

While May made a partial U-turn by saying this figure would be capped, there are no indications on how much this cap would be. But none of this detail appeared in the easy-read manifesto. In fact, most of what was printed [pdf] was very misleading:

How the ‘dementia tax’ can be described as a way to “protect people’s savings” is anyone’s guess.

Now the Tories could argue that explaining how they are planning to do this would be “unnecessary detail”. But then the easy-read document also has a text-heavy quote from May, and it attempts[pdf] to explain meritocracy, the GDP, and NATO (while not trying to explain inflation): 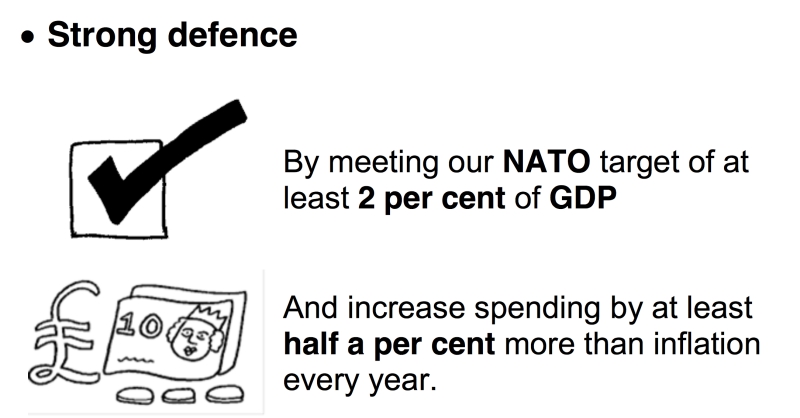 In other words, it’s fair to say that the Tories’ document is not so easy to read in places. So there is no excuse for not explaining its social care plans.

But one missing part of the manifesto that is very easy to explain is the fact that May is planning to steal infant children’s dinners and replace them with breakfasts. Breakfasts that were so poorly costed, they were originally planned to be delivered for just 6.8p per child.

The easy read doesn’t mention school dinners. Instead, under the section “A government not afraid to confront unfairness”, the document reads:

It would not exactly be difficult to provide a second sentence to say that children will not receive a free school dinner.

Issues such as social care are vitally important to all of us, but particularly to those with disabilities. Not attempting to explain unpopular policies in an accessible way is a disgrace, and insulting. And given some of the things the Conservatives included in the document, there is no defence.

But this is perhaps not surprising for a government that has treated disabled people with contempt, cut their benefits, stolen their cars, and cut their care to the point that people are forced to wear incontinence pads.

The learning disabled community deserves better than this. They deserve a government that cares about their interests, protects their benefits, and can produce an accessible document that doesn’t hide the truth from them.