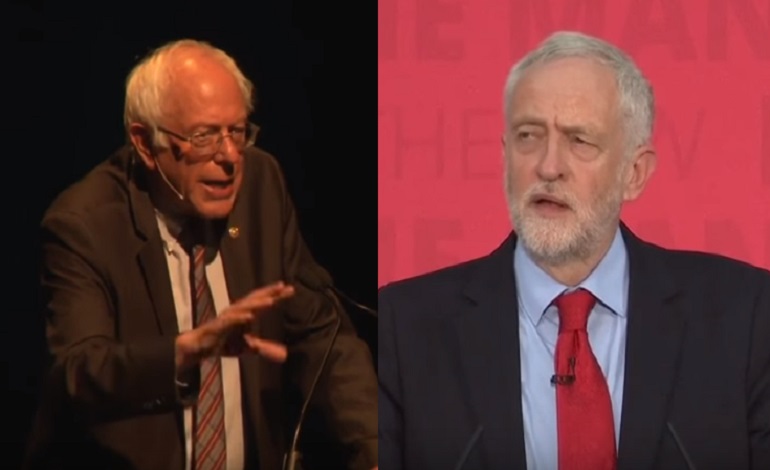 Bernie Sanders is currently on a three-day tour of the UK. And he used part of a speech in Brighton to give a ringing endorsement of Jeremy Corbyn’s election campaign.

His words will be music to the ears of the Labour leader’s supporters.

The senator and former US presidential hopeful was speaking at a sold-out Brighton Festival. He was discussing the situation in the US, progressive politics, and the need for change around the world. But he took the time to say he is “very impressed” with how Corbyn has “taken on the establishment of the Labour Party, he has gone to the grassroots, and he has tried to transform that party”. And his message received rapturous applause:

Sanders discussed the fact that both the US and the UK are in need of progressive, even radical, politics to tackle the challenges the countries face. But he also spoke of the need to tackle them globally:

These problems are not unique to the US… Globalisation has left far too many people behind. Workers all over the world are seeing a decline in their standard of living. Unfettered free trade has allowed multinational corporations to enjoy huge profits and make the very rich even richer while workers are sucked into a race for the bottom.

These are not American issues, or British issues – these are international issues… Our job is to create economies that work for working people – that uplift the poor, not make the very richest almost unbelievably rich while leaving everyone else behind. This is a global issue and we must address it.

And it seems this international message is one which is resonating with UK voters, if the opinion polls are anything to go by. Latest aggregate polling shows that Labour are on an average of 35.2%, their highest level since September 2014. Meanwhile, the Tories have continuously slumped; currently, they are sat on 44.3%.

But what’s also interesting is that Theresa May’s approval ratings have bottomed-out. For the first time, more of the public are now dissatisfied with her than are satisfied (50/43). Corbyn’s, meanwhile, are still improving. And separate polling showed that the majority of the public supports Labour’s manifesto.

The endorsement from Sanders, while not unexpected, is still positive news for Corbyn. Currently, the Labour leader can do little wrong. And support from such an influential left-wing figure can only bolster his campaign. Whether this translates to votes on 8 June remains to be seen. But if the election was a popularity contest, it is looking increasingly like Corbyn would win hands down.