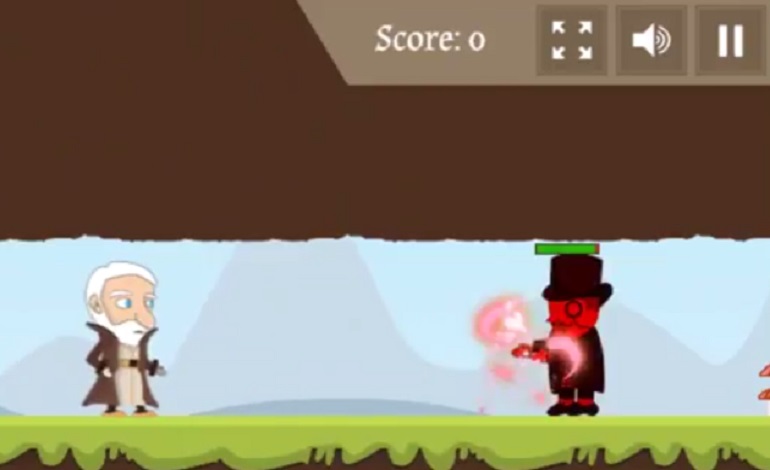 A new video game has been launched that’s based on the general election. It sees Jeremy Corbyn working his way through a land filled with evil establishment enemies, trying to make it to Number 10. And as those of us who have played it at The Canary can testify, it’s highly addictive.

The General Election Game was created by Salvatore Tedde. He told The Canary he was inspired to create it because of Corbyn’s “honesty and integrity”. But it also came about because of Tedde’s own background:

During the last two years I have been closely following Corbyn’s rise and his constant struggle to get his principles and Labour’s policies known by the general public. Being an Italian national and considering the level of corruption in Italian politics, I know how rare it is to find someone like Jeremy Corbyn and I admire his honesty and integrity.

It is an utter shame that so many people do not yet know his personality and policies, especially those people not engaged in politics. This is where I got the idea for this game, as I think it is the perfect medium to introduce Jeremy to people not actively involved in Britain’s politics.

The General Election Game is a traditional platform-based model. It says that the player has to “Help Jeremy the Wise Wizard transform Britain for the better. Help him build a country for the many, not the few”:

Tedde is a front-end developer and self-taught game developer. He says his main goal is “to use gamification techniques for teaching purposes”. But his political background has brought him to a place where he supports Corbyn’s Labour. “I come from a moderate left-wing family”, he recalls, “therefore I always fought both here and in my country for social equality and justice and I back 100% Corbyn’s manifesto”. And he says his game has struck a chord with everyone who has played it because people “like the idea of fighting the super-rich”:

The reaction has been great, the people that have played the game are now more familiar with Jeremy’s personality and more knowledgeable about his policies. When they finish the game they are left with a spark of curiosity about who the enemies are and intrigued to learn more about the British political scene. I think people really liked the idea of fighting the super rich and stopping needless wars, because most people agree that both issues affect their lives greatly. So, they can relate with Jeremy’s alter-ego who fights for a fairer and safer society.

Industry must do more

But Tedde also has strong views on the gaming industry, more broadly. The music business in the UK has seen a revival in successful political and protest music, from Captain SKA’s Liar, Liar GE2017 to the Grime scene coming out in support of Corbyn, via socially conscious rappers like Potent Whisper and NxtGen. But such political engagement is rarely seen in the gaming industry, which is worth £4.33bn in the UK annually.  Tedde says the industry, but also the arts more broadly, could be more socially proactive:

This is a broad topic but I think that every industry, be it the gaming industry, film industry or music industry, should get more involved in politics, as we face a very difficult time and we cannot ignore it. Especially now that President Trump is abandoning the Paris climate agreement. I am positive that things are changing though, as during the presidential election in the US, many game developers have been involved in politics against Donald Trump, and the corrupted wing of the democratic party.

The General Election Game is a particularly novel idea. Being in desktop format means it is available to everyone, young and old. And while not overly complicated, it is engaging enough to maintain people’s interests. Also, there are wry political and pop culture references throughout, which makes the whole experience even more entertaining. But ultimately, the game’s message is all about Corbyn. And Tedde believes that Labour is in with a fighting chance in the election:

Investment is what drives economies, and his manifesto is full of great ideas that will let UK’s economy thrive. It is not going to be an easy ride though. The fight has just begun. But hopefully he’ll be able to reverse the destructive neoliberal policies introduced by Margaret Thatcher. And take the Tories out of office for a long time to come.