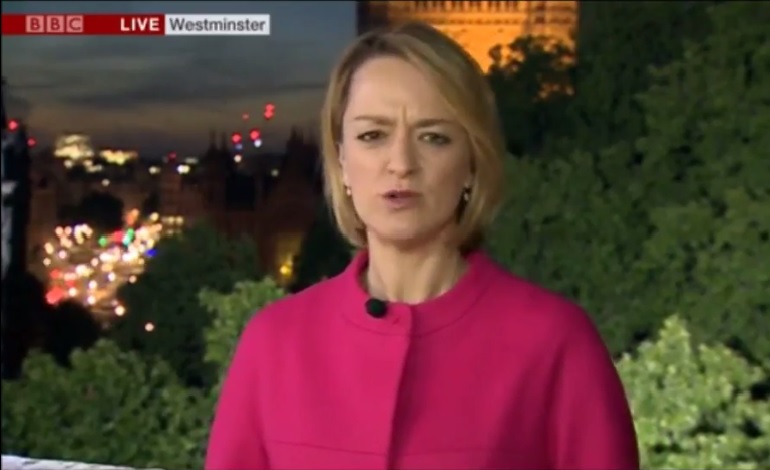 Laura Kuenssberg’s response to BBC Question Time’s Leaders’ Debate was extraordinary. Because she completely made up a story about the debate in an apparent attempt to prove her point.

Her point, of course, was to suggest Jeremy Corbyn struggled in the debate. Whereas Theresa May’s performance marked the start of her campaign’s recovery, after “a bumpy few days”. But that point is as much fiction as the story she made up to prove it.

Kuenssberg reported that the audience “pressed” both leaders in their “areas of vulnerability” on the Question Time special on 2 June. They pushed May on domestic issues. Particularly, on the cuts in the NHS, social care, education and more.

In contrast, Kuenssberg said, the audience confronted Corbyn on security issues, like the use of nuclear weapons. The BBC’s Political Editor said Corbyn’s “unwillingness to use weapons if Britain was under attack” didn’t go down well with the audience. This interpretation is, however, untrue. Corbyn did not say he wouldn’t use nuclear weapons. He said there would be “no first use” of them, meaning he wouldn’t start a nuclear war. Also, he said, in terms of a retaliatory attack, he would “decide in the circumstances at the time”.

Kuenssberg then concluded that while May seemed more on the “front foot” in the programme, Corbyn’s experience was less positive:

In contrast, Jeremy Corbyn who had been lapping up the political attention, and setting much of the momentum, seemed almost irritated by the end.

The “irritation” Kuenssberg speaks of didn’t exist. In fact, when presenter David Dimbleby told Corbyn it was the end of his Q&A session, he smiled and said:

But I’ve got so much more to say!

And he received applause and cheers for his contribution.

Importantly, Corbyn’s refusal to use nuclear weapons in a first strike capacity is something that should give us all more security. And this is shown in what would happen in the event of a nuclear tit-for-tat war.

In April, Defence Secretary Michael Fallon broke with UK convention and said he would not hesitate to fire nuclear weapons in a first strike. As a minister who has also increased the chances of a nuclear confrontation with Russia, The Canary looked into what would happen should Fallon act on his first strike rhetoric and carry out a Trident nuclear strike on that country. Here’s what we found:

There’s limited information about Trident’s force. But commentators say that today’s nuclear weapons are around seven to eight times more powerful than the atomic bomb the US used on Hiroshima in 1945. That bomb killed 140,000 people. And Trident can allegedly travel up to 7,500 miles. So it could reach Russia and kill masses of civilians.

But Russia… has 7,000 nuclear warheads; of which 4,500 are either deployed or stockpiled. That’s around 33 times more warheads than the UK has. And Russia’s weapons will be just as powerful, if not more so. Take the Satan 2 missile as an example. It can allegedly carry up to a dozen warheads and level an area the size of the UK in one hit. The UK has a population of around 65 million people.

And if that sort of nuclear conflict kicked off, the US would surely join the fray, with its 6,800 warheads. The US has just over 4,000 of these deployed or stockpiled.

This would be a global catastrophe.

The very real threat of a nuclear war commencing between the world’s larger nuclear powers, and the destruction that would bring, is why the audience gave one particular commentator the biggest applause of the night:

Kudos to the young woman who expressed surprise so many in #bbcqt audience are obsessed with genocide pic.twitter.com/oKdYB0EbTZ

The BBC‘s round-up of audience members who ‘stole the show’ listed this woman’s comment last. But that’s more a reflection on the BBC than the country at large. Because most people surely don’t want the catastrophe detailed here to play out. And now they have a politician standing for Prime Minster who’s determined to avoid a conflict that could see the UK lying at the bottom of the Atlantic ocean.

If that’s not an option people want, then we’re in a desperate place indeed.