After rapper Akala nails the heart of UK media bias, even the BBC’s Andrew Neil is forced to agree [VIDEO] - Canary 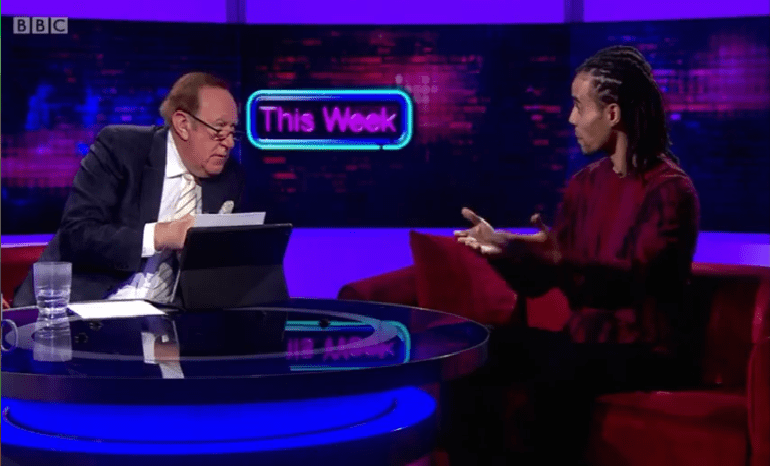 After rapper Akala nailed the heart of UK media bias, even BBC host Andrew Neil was forced to agree. The renowned hip-hop artist got to the bottom of the issue:

I don’t believe complete objectivity is even philosophically possible… If I ran a news channel, even if I didn’t mean for it to, it would naturally reflect some of my passions.

The episode of This Week concerned media bias against Jeremy Corbyn. Neil, who was editor of Rupert Murdoch’s The Sunday Times for 11 years, concurred that Akala has a point:

Because you choose the agenda… and so on

So if you have… similarly educated people from similar backgrounds running all of the main institutions, even if they don’t intend it, the outcome can often be… biased.

I think that’s one of your strongest points

The heart of the issue

Akala’s assessment of media bias is shared by US academic Noam Chomsky. Journalists are always biased to a degree because they must select which stories they cover. So BBC journalists who support the political establishment are not necessarily conspiring actively against Jeremy Corbyn. For Akala and Chomsky, they are selecting and framing stories in a way which contributes to a worldview they subscribe to.

And, when it comes to the UK media, the ownership is heavily concentrated:

Both Akala and Chomsky have also recently come out in support of Corbyn. Among Akala’s many reasons for voting for the first time for Corbyn is:

for the first time in my adult life and perhaps for the first time in British history someone I would consider to be a fundamentally decent human being – that is, someone who does not want to kill the poor and does not routinely make a habit of rationalising the bombing and invasion of other people’s countries under the rubric of humanitarianism – has a chance of being elected.

On media bias, even the BBC show itself seemed to back up Akala’s position. The rapper was not only up against host Neil. But also two right-wing politicians: Labour’s Ed Balls and Tory Gove. At one point, the friendly banter between the two politicians was so apparent, Neil pointed out:

See how they… different parties… they stick together

Earlier in the show, Gove alluded to an equivalence between new progressive media and the traditional press:

One of areas where I disagree, is that the media is not a monolith… On the left, there are sites like The Canary and Skwawkbox… undeniably have a following, so I think there’s a greater degree of pluralism

But an audit by the Centre for Research in Communication and Culture shows Gove is wrong to suggest that coverage of Labour and the Conservatives is in any way balanced. The centre at Loughborough University has been assessing media coverage throughout the general election. The findings from the past four weeks were weighted by newspaper circulation: 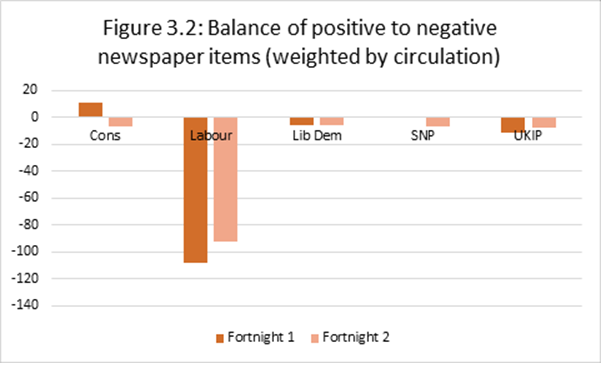 As the graph shows, press coverage throughout the general election has been overwhelmingly anti-Labour. Although, there has been a shift against the Conservatives the past two weeks. Given even Tory candidates are denouncing Theresa May’s campaign as a “clusterfuck”, that’s not too surprising.

On This Week, Gove was correct that new media like The Canary has cultivated a very significant readership. But, as the graph illustrates, only an industry of online progressive outlets that matches the circulation of newspapers would cultivate balanced coverage overall.

But that’s not yet the case. As Akala argues, the top-down hierarchy of a media controlled by billionaires and establishment figures has a knock-on effect on coverage. And the audit by Loughborough provides part of the evidence that brings allegations of biased coverage from opinion, to fact. With the media barons behind the Conservatives, only real conversations between ordinary Britons can swing this election.

Watch Akala get to the heart of the issue:

– Find out more about Akala in this 2016 interview. And check out his Hip-Hop Shakespeare Company

– Vote on 8 June: this coming Thursday