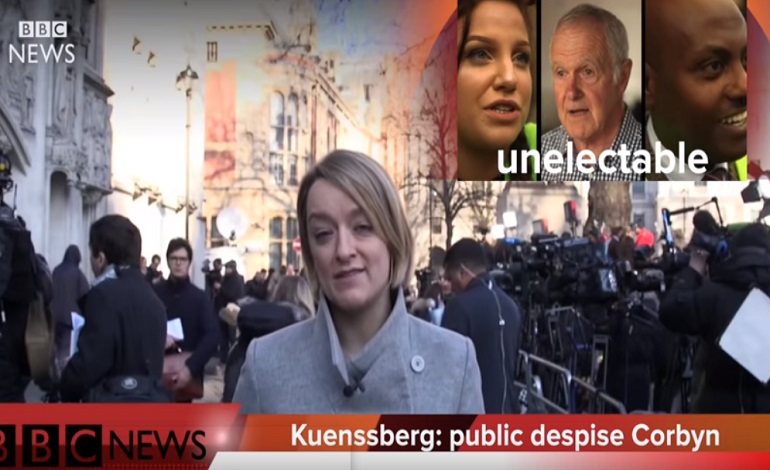 A filmmaker has said that the bullying of Jeremy Corbyn by the mainstream media is “disgusting”. But his latest film, which has now been viewed nearly 1 million times, takes not only the press to task, but also decades of establishment-led politicians.

Just what was done?

As The Canary previously reported, Jeremy Bernard Corbyn: What Was Done by Bonnie Prince Bob looks back at the last quarter century of British politics and satirises what went wrong. Only much like Armando Iannucci’s Time Trumpet, it does so from the future. A future in which Jeremy Corbyn became PM and replaced Buckingham Palace… with some prime location allotments:

And The Canary caught up with Bob, to discuss the film, what motivated him and what he really thinks of the state of UK politics.

Bob says that the film was inspired by the so-called Labour ‘Chicken Coup‘ of 2016, where orchestrated resignations by MPs attempted to unseat Corbyn as leader. Originally Bob was going to make a film about this, because he was “disgusted” by these MPs’ behaviour, calling it “anti-democratic, vulgar and self-serving careerism”. But Bob then had a better idea:

I was unable to make that particular film so I reworked the original concept and, perhaps insanely, decided to make something ten times bigger with essentially no money. I managed to pull together an incredible team: visual effects artist Helen Bunker, compositor Shaun Milne and film director Siri Rodnes. They shared my vision and gave me their time and professionalism. It was a Herculean effort with such little resources but everyone worked like dogs and the end result is What Was Done.

What Was Done takes us on a journey from the pre-WWII era of poverty-stricken working classes, through the economic and social changes of the 1950s and 60s, via Margaret Thatcher’s 80s and Tony Blair’s ‘noughties’, to a time in the future where Corbyn has been in power and since departed to the “great allotment in the sky”. And while much of it is fact based, a lot is also tongue-in-cheek satire.

But as Bob told The Canary, his skewing of history was intentional. Because he wanted to highlight the battle Corbyn has faced:

While What Was Done plays with form and exaggerates and subverts history in a fun way, there are deep truths within the film. But it is also a story of achieving against adversity. I have never seen anyone bullied in the way that the media and press have treated Corbyn, it is disgusting. We are taught that bullying is wrong yet we are witness to this person being subject to literally years of constant, ad hominem attacks. If people think he is not strong, just ask yourself, could you sustain such continual abuse and still stick it out? Personally, I’ve grown to become very impressed by his resilience.

Bob says he is not a ‘Corbynista’; he will actually be voting for the SNP on 8 June. But he realises that Corbyn’s Labour has done something quite remarkable. Even if they do have problems in Scotland. Bob said of Scottish Labour:

It is essentially a bewitched cadaver. How it still functions at all is beyond me. Kezia Dugdale had a golden opportunity to be seen as a young vibrant progressive leader; she could have offered Scottish Labour an internal dialogue regarding independence and she could have respected the appointment of Corbyn. But instead she has continued the tedious rhetoric preached by her Blairite mentors Jim Murphy and John Mcternan; dissed Corbyn and refused to budge on independence. She, like her party, are political non entities.

He believes that the rise of the SNP is down to one thing: the “absolute cataclysmic failure of Scottish Labour to pay any attention whatsoever to what the people of Scotland actually want”. But he is also aware that the SNP are not some magic wand for Scotland. He says that many people in Scotland “have blinkers on” when it comes to the SNP, “but they have an easy ride up here with such pathetic opposition”. He does, however, admit that that the SNP does have “a social conscience, and Sturgeon is [a] spectacular politician. A progressive alliance with Labour would be fine by me”.

Bob is not a filmmaker by trade. He is actually a music producer, working predominantly with reggae and dancehall artists, but also more mainstream pop. But he says his work is always led by “socio-political themes”. And it’s the socio-political that shines through in What Was Done. One of the most impressive parts of the film is Bob’s analysis of post-WWII Britain. He narrates [5.10] in the film:

When conflict finally ceased, it became clear to the elite that any return to a compliant, servile population was not on the cards. Living conditions of the lower classes had barely improved in a century, and were all but Dickensian. The battle weary had seen their comrades obliterated and spilled their blood for King and country. They were tired of jingoism and now sort recompense… in the form of radical social improvement,. The custodians of power and representatives of all political parties sensed a real and present danger. The men returning from war-ravaged Europe were no longer mere civilians. They were trained combatants and were disciplined in military procedure. Any potential civil unrest now held grave implications. A disenfranchised, angry populace was one thing. Equip the same demographic with the arts of warfare and Guy Fawkes dream seemed a far more feasible reality.

This part, Bob says, is probably his proudest segment:

I’m proud of this part, for reinforcing the fact that post war, the guys coming back were not up for taking any shit. Even if the Tories had got back in, believe me, they would have had to deliver an NHS and social reforms. Poncy TV academics and establishment historians have conveniently airbrushed this fact from time.

Bob is, in reality, unsure of what a Corbyn-led Labour government could deliver, and whether it would actually end up as radical as many think. But there is one thing he is sure on: the contempt he has for the Tories:

The current Conservative administration is beneath contempt, taking food from the mouths of the poorest in society and enacting the social violence of their austerity programme is just off the radar twisted. The normalisation of these plutocrats by the establishment media is utterly depressing.

What Was Done is one of the most endearing, impressive and thought-provoking films of the election. While it is laugh-out-loud funny in places, it cleverly twists and turns to give the viewer pause for thought on numerous occasions. And Bob’s articulate, measured narrative sews the historical footage and effects-led future together well. A must-watch for anyone wanting an antidote from the current slew of debates, soundbites and tired mainstream analysis.