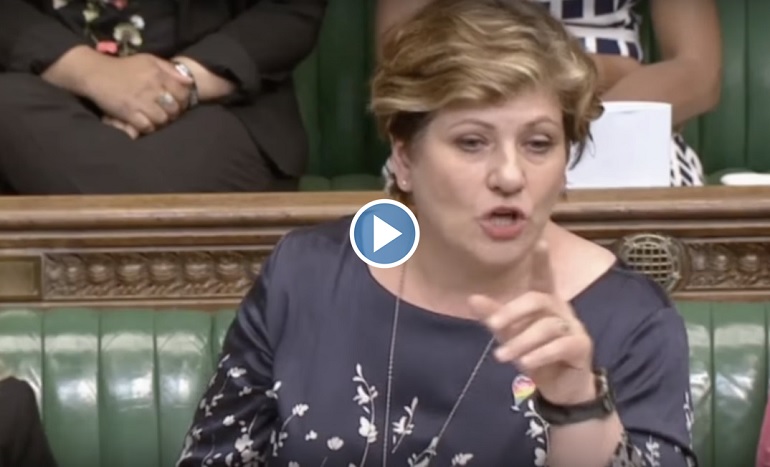 Shadow Foreign Secretary Emily Thornberry has slammed the Conservative government for ‘burying’ a report on foreign funding of extremist groups in the UK. And she took particular aim at Foreign Secretary Boris Johnson, who has previously floundered on the issue.

When can we expect the publication of the report into the foreign funding of extremist groups in the UK?

And she referred back to Boris Johnson’s floundering on the issue before the 8 June general election:

We need to look into this, and we need to understand it… And yet, this is what the Foreign Secretary said when he was asked about the report on 6 June. He said, and I quote: “I’ll dig it out… and I’ll have a look at it, if that’s what you would like me to do.”

With this ‘digging’ reference in mind, the Shadow Foreign Secretary stressed:

Well, we don’t want him to ‘dig it out’. It should never have been buried in the first place. We want the government to publish it, and we want them to act on it…

Politicians and journalists alike have accused the Conservatives of trying to suppress the investigation because it reportedly highlights the role that Saudi Arabia plays in funding terror. Especially considering that Theresa May is a strong supporter of Saudi Arabia; that her government recently approved £3.5bn worth of arms export licences to the country; and that Tory politicians have reportedly received nearly £100,000 in gifts, trips and fees from the hereditary dictatorship.

And there’s not only an ideological link between Saudi Arabia and Daesh (Isis/Isil). There are also potential funding links. One Hillary Clinton email published by WikiLeaks, for example, bluntly describes Western allies Saudi Arabia and Qatar as direct supporters of Daesh and other extremist groups (though one senior Qatari official insisted in 2014 that Daesh began as “a Saudi project“).

Back in parliament, Thornberry sought to push the government on the key issues raised in the report, asking:

The struggle for peace at home and abroad

But Thornberry’s speech in parliament wasn’t just about getting the government to release the report on extremist funding. It focused primarily on the decades-long conflict between Israel and Palestine. An issue that Conservatives and their media cheerleaders have long sought to exploit as a smear tactic against Labour leader Jeremy Corbyn.

Thornberry’s speech was no different. A number of Tory MPs tried their best to link Corbyn to groups like Hamas and Hezbollah, but the Shadow Foreign Secretary said:

I think that one way that we can approach this is by looking at the truth of the situation; which is that… the leader of my party wishes…, in order to engage people in peace, to bring people together and to try to get them to discuss matters. Because it is only through discussion and it is only through agreement that one can get peace and one can get progress.

The US and the EU have designated Hamas as a terrorist organisation. But the party is also the democratically elected government of Gaza, and labels itself “a national resistance movement”. Between 2001 and August 2014, rocket and mortar attacks from Gaza (not necessarily launched by Hamas) reportedly killed 30 civilians in Israel. During the 2014 Israeli assault on Gaza alone, meanwhile, roughly 1,500 Palestinian civilians lost their lives, along with five civilians in Israel.

In 2016, Jeremy Corbyn explained why he had previously used the term “friends” to describe Hamas and Hezbollah in parliament in 2009:

Comprehensive peace in the Middle East

Jeremy Corbyn received the Gandhi Foundation International Peace Award in 2013. This was in recognition of his “consistent efforts over a 30-year Parliamentary career to uphold the Gandhian values of social justice and non‐violence”. And these efforts in favour of peace and dialogue were reflected in Labour’s 2017 manifesto, which committed to [pp117-118]:

And as Thornberry’s insistence on publishing the report into extremist funding suggests, Corbyn’s Labour also believes in the need for transparency in order to address the extremist threat on British soil.

These are the kind of sensible foreign and domestic policies that Britain sorely needs, but isn’t currently getting.

– Also find out more about the Palestinian Solidarity Campaign; about the Boycott, Divestment, Sanctions (BDS) movement; and see other Canary articles on Palestine and Israel.

Featured image via The Daily Politik