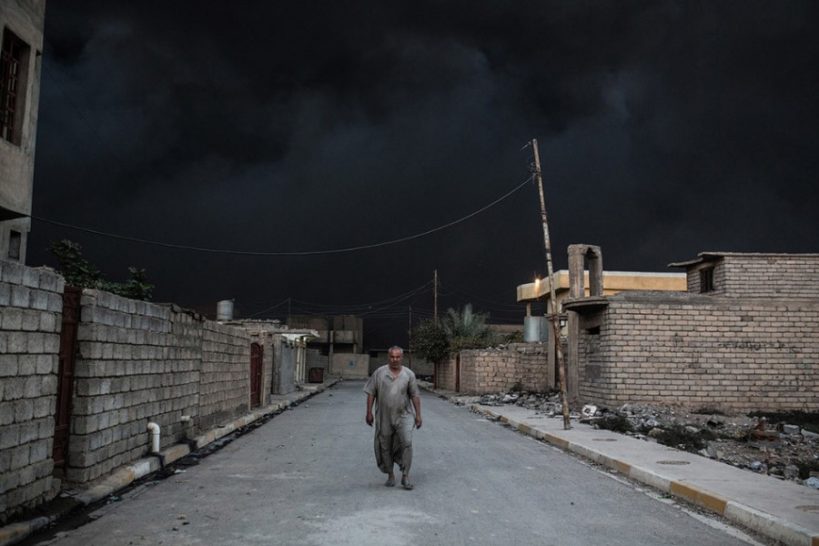 In 2014, Daesh (Isis/Isil) grew its influence through a number of battlefield wins. Its capture of Mosul, the second largest city in Iraq, was particularly symbolic. And for that reason, the Iraqi government’s liberation of the city on 10 July 2017 was equally symbolic; potentially spelling the beginning of the end for Daesh terror.

The symbolic liberation of Mosul

Celebrations soon broke out across Iraq.

Iraqis in Baghdad take to the streets to celebrate the "total victory" over Islamic State in Mosul.https://t.co/dTdaGarali pic.twitter.com/tNHTwcfvlx

Daesh hit the news in 2014 after taking over territory the size of Jordan in the Middle East. And as The Canary previously reported, Mosul had particular importance due to the presence of oil. This helps to explain in part why so many different groups wanted to join the anti-Daesh coalition when it began its offensive on Mosul back in October 2016.

Another important battle is still underway in the self-proclaimed Daesh capital of Raqqa in Syria. But the terror group’s defeat in both Mosul and Raqqa would be massive victories. As the coalition’s commanding general Lt. Gen Steve Townsend said back in June:

Once ISIS is defeated in both Mosul and (Raqqa), there will still be a lot of hard fighting ahead… [but it’s] hard to convince new recruits that ISIS is a winning cause when they just lost their twin ‘capitals’ in both Iraq and Syria

And Daesh may have also suffered another strategic loss this week; as on 11 July, the Syrian Observatory for Human Rights claimed it had “confirmed information” that Daesh leader Abu Bakr al-Baghdadi had died to the east of Raqqa. Independent verification, however, wasn’t available at the time of publication.

The importance of rebuilding

The most important issue in Mosul now is to rebuild. Especially considering that it was the destruction and chaos following the 2003 invasion of Iraq that gave the forerunners of Daesh fertile ground to grow in the first place. Even Tony Blair himself has acknowledged the link between the war and the rise of Daesh.

While the Western bombing campaign was reportedly paramount in the fall of Mosul, there were also numerous allegations of civilian deaths as a result. Airwars, which tracks such deaths, believes that a minimum of 4,354 civilians may have died so far in coalition air strikes in Iraq and Syria. Meanwhile, hundreds of thousands of civilians have fled from Mosul alone in recent months.

This is the number of people who have fled the Iraqi city of Mosul each week since the offensive against ISIS began https://t.co/pIdxRc8z0S pic.twitter.com/2pJtVvhGXt

Fawaz Gerges, a Middle East expert at the London School of Economics and Political Science, is just one person who believes that military victory is just the first step. And he stresses that there’s no time to waste in beginning social and physical reconstruction, saying:

The first challenge facing the Iraqi government and international organizations is to provide basic necessities of life for more than 400,000 Iraqis who have been displaced from the western part of Mosul, which mostly lies in ruins.

Defeating Daesh militarily is important. But it’s just the first step. The real challenge will be ensuring there is no fertile ground for it to return in the future. And that will require both significant reconstruction efforts and meaningful political change.

The Syrian Democratic Forces (SDF), the ground forces in the battle for Raqqa, know this all to well. For that reason, they’ve focused on winning not just on the battlefield, but also ideologically; having spent years building and defending a secular, feminist, and democratic alternative to the chauvinist authoritarianism of Daesh. This is what Mosul – and all other areas liberated from Daesh – desperately need; not only the defeat of Daesh militarily, but a new political system which ensures the group’s ideology will never return.

– Write to Theresa May and your MP. Ask them to respond to Daesh terror by recognising and supporting the progressive alternative of Rojava in northern Syria.