The media goes into meltdown over a Cornish 'suicide bomber'. But there’s a problem. There isn’t one. 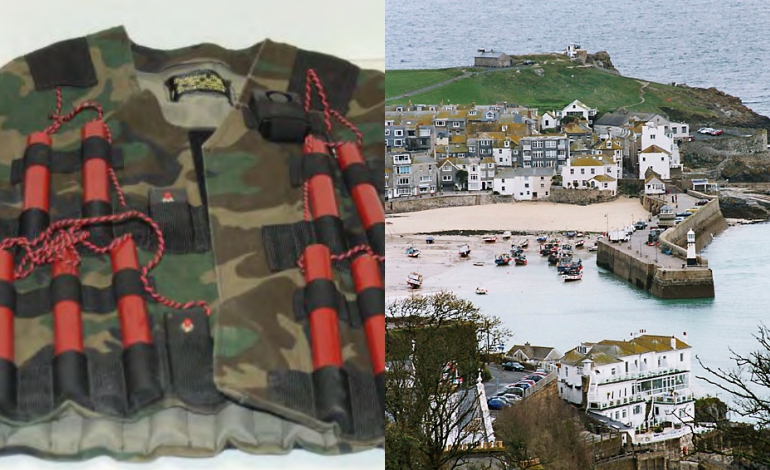 The tabloid press has gone into meltdown over a new ‘threat’ of terrorism from a Cornish nationalist group. Headlines screamed that the group claimed they’d burned down Rick Stein’s restaurant and even had a “suicide bomber”. But there’s a problem. The articles are all based on a blog post that does not mention a suicide bomber and is not “credible” according to the police. Also, according to the fire service, the blaze at Stein’s restaurant was due to an electrical fault. And the story has been roundly dismissed by local activists.

The story appears to originate from local news website Cornwall Live, which published screenshots from a blog where it says the claims were made. A statement on the site claimed that the group was responsible for burning down Rick Stein’s restaurant.

It then spread across the national tabloid media with The Daily Mail and The Sun picking up the story, among many others. Central to all the stories are screaming headlines about a “suicide bomber” in Cornwall. But the statement on the blog (that has since been taken down) does not mention a suicide bomber. It states:

Our organisation has grown and we now have one member who is prepared to pay the ultimate price in the battle for Kernow [Cornwall]. She realises the EIS [English Imperial System] police are prepared to commit murder as happened in London when an innocent man was killed by them – Jean Charles de Menezes. She is prepared to sacrifice herself although we shall not ask for this lightly – only as a last measure.

But if it wasn’t enough that a statement on a blog has widely been taken out of context, the claims have also been dismissed by the police and fire service.

Radio Cornwall spoke [from 1:22.55] to the police for the Laurence Reed show. The police stated about the fire at Stein’s restaurant:

The incident in question… was an electrical fault in the kitchen and not suspicious.

We have nothing to suggest that what is stated within these blogs… is credible.

This was also confirmed by a spokesperson for Cornwall Fire and Rescue Service, who said:

The fire service have confirmed that the likely outcome was probably an electrical issue and not one of deliberate ignition.

The stories have also angered local activists. The Canary spoke to Kernow Matters to Us (KMTU), whose mission statement is:

To ensure that every Cornish person is represented to decision makers, and is healthy, housed, educated and safe.

A spokesperson claimed that the Cornish Republican Army first became known to them during a protest against the proposed changing of the boundaries of Cornwall:

During last year’s peaceful protest against ‘Devonwall’ – which was so peaceful that even though hundreds attended and blocked the road at one point, the police never attended – an individual appeared on social media claiming to be the Cornish Republican Army. This individual was traced to London and suitably warned by members of KMTU.

And they warned of the damaging impact these stories can have:

This recent report once again shows just how gullible the wider media are and how a failure to conduct even a few basic inquiries can lead to poor reporting and further abuse being aimed at the Cornish National Minority Group.

These views were echoed by author and historian Craig Weatherhill. Speaking to The Canary, Weatherhill said he was “incensed” by the story and warned of the consequences of such scaremongering:

A similar silly season story 10 years ago, in which the tabloids invented a shadowy and utterly fictitous CNLA, resulted in several armed dawn-raids on totally innocent by police looking for evidence of something that never existed in the first place. Those people went through months of sheer hell for no reason at all, until their names were finally cleared.

Laurence Reed summed up the problem on Radio Cornwall:

This is what frustrates me about certain newspapers… why would they make up… fake news…? It’s just ridiculous. Please get an element of truth in these stories. As far as the police are concerned… there is nothing.

And this is a view echoed by the KMTU:

Cut-price journalism by right-leaning newspapers does no one any favours and further underlines the necessity to be cautious in the extreme about so-called news which appears in The Daily Mail and allied papers.

Weatherhill also points out that this is not a one-off story:

It’s only a few months since The Express ran a scurrilous lead story with a totally false linking of Cornish language funding with “the rise in terrorism”. These serial tabloid lies are doing Cornwall tremendous harm, and for what reason?

These stories are nothing but scaremongering by the press, based on a blog post that even the police claim isn’t “credible”. And the “suicide bomber” headlines are based on a reading of a statement taken completely out of context.

But these stories are also incredibly damaging. Not just for the fear they create, but for the impact they have on people campaigning for a better Cornwall. And it is a damning indictment of the mainstream media that this story spread so widely without anyone fact-checking or attempting to find out if there was any substance behind it.

– Consider becoming a member and supporting The Canary and the work we do.