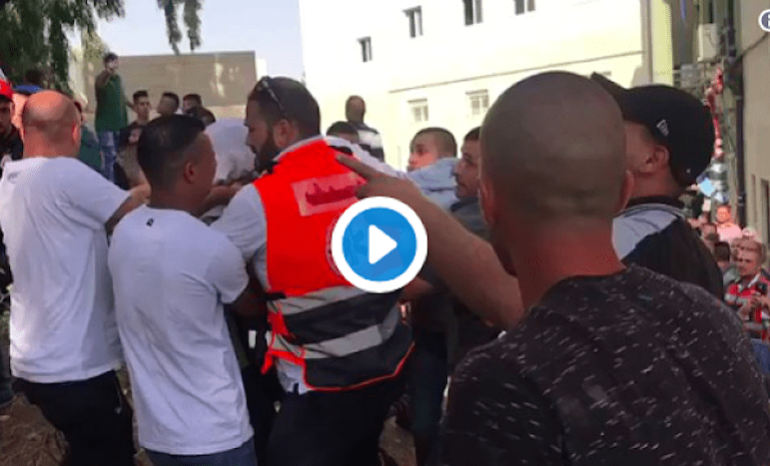 Tensions erupted on Friday 21 July in occupied East Jerusalem as a protest resulted in clashes between Israeli authorities and protesters. And the events could be threatening the status quo.

According to reports, Israeli Defense Forces (IDF) clashed with protesters at the site of Al-Aqsa, a sacred place of worship for Muslims, in the old city of East Jerusalem.

A protest emerged by the site as Muslim men under 50 were prevented from entering the city for Friday prayers.

On the ground, reports posted on Twitter showed the crowds gathering, forming their own prayers, and protesting peacefully.

The calm, just moments before the storm that saw Israeli soldiers attack Palestinians praying outside the Al Aqsa Mosque. pic.twitter.com/zFD4rFVFaO

Just moments before Israeli soldiers attacked this crowd. So far 3 Palestinians have been killed by Israel's offensive. pic.twitter.com/7FgA8G7yMU

This was just before clashes took place:

So far three martyrs in Jerusalem clashes, two under 18, and one under 25. All named Mohammed. 🙏🏾 RIP pic.twitter.com/SH6PKXeemB

According to some reports, the IDF released tear gas to disperse the crowd; other reports claim they fired stun grenades. Three Palestinians were reportedly killed in three different areas of East Jerusalem and the West Bank. Up to 400 others were also injured, according to the Palestinian Red Crescent.

We can see one of the young men killed, 21-year-old Mohammad Abu Ghanum, being taken away here:

GRAPHIC: Mohammad Abu Ghanam, 21, studying in Bir Zeit was killed by Israeli forces, bled to death before Palestinians could take him back. pic.twitter.com/Nd4YFPPA86

Reports suggest that Ghanum, as well as 18-year-old Muhammad Mahmoud Sharaf (who was also killed), were taken to be buried quickly to avoid the IDF confiscating their bodies. While Ghanum was allegedly shot by Israeli police, Sharaf may have been killed by an Israeli settler.

The recent tensions began when metal detectors were installed at the site after violence erupted there on 14 June, also on the day of Friday prayers. Three armed Palestinian Israelis killed two IDF soldiers near the Al-Aqsa compound and then fled toward it. The three attackers were then shot and killed.

After the entrance to the Al-Aqsa mosque had been shut for two days, Israel installed the metal detectors, claiming it was for everyone’s safety (on the belief that weapons could be smuggled into the site). Prime Minister Benjamin Netanyahu denied it was to disturb the status quo. But Palestinians opposed this measure because they say Israel was just trying to exert its control. Palestinian leaders urged people not to enter until the metal detectors were removed. And while there was speculation that Netanyahu would agree to their removal due to the thousands of people who attend Friday prayers, he decided against it on the suggestions of his advisers. Instead, he boosted the police presence around the area to unprecedented levels in addition to keeping the metal detectors.

Now, there are calls for a ‘day of rage’ to protest the security measures in place. And prayers will take place in public squares on Wednesday 26 July.

Increased security around the highly sensitive site has often led to bouts of violence. Palestinians and analysts remain wary of Israel’s motives. In particular, they point to the double standards and pattern of securitisation that gives Israel more sovereignty:

The events are yet more worrying developments in a 50-year occupation and political impasse. Developments from all angles need to be watched closely.

– Read more Canary articles on Palestine on The Canary Global.