There’s a massive arms fair coming to London. And these people want to make sure you notice. [IMAGE] - The Canary 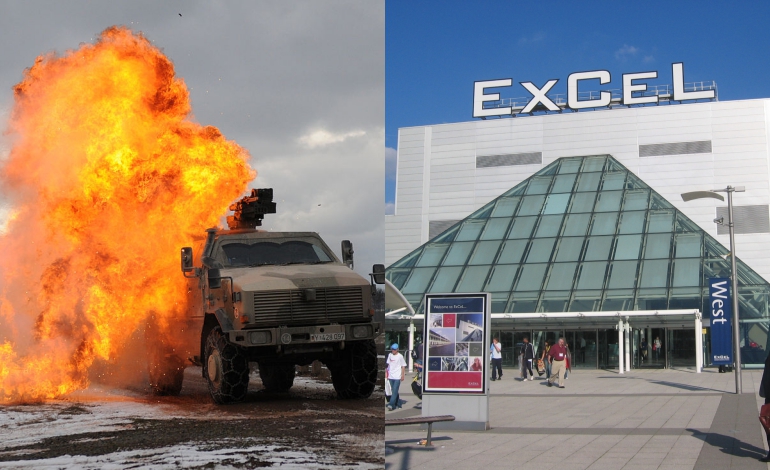 In just under three weeks, one of the world’s largest arms fairs is coming to London. And ‘Protest Stencil’ is making sure that people in the area are aware of what’s happening.

The Defence and Security Equipment International (DSEI) event is taking place in September at the ExCeL Centre. So Protest Stencil made new posters for the bus stops around the centre:

Only two weeks until @ExCeLLondon hosts the festival of death and terror. Posters all around say shut it down! #StopTheArmsFair #StopDSEI pic.twitter.com/tBLPJ1D3VH

What is the DSEI?

In 2015, arms dealers from 61 countries queued up to view the wares of 1,500 exhibitors. 14 of the countries invited, including Algeria and Bahrain, had authoritarian regimes. Four, including Saudi Arabia and Pakistan, have been listed by the UK as having human rights issues. And a further 11 countries on the list, such as Ukraine and Iraq, are currently at war.

London Mayor Sadiq Khan wants to see it banned from the capital. But he says he is powerless to stop it. Meanwhile, there is an eerie silence from the government over DSEI. Although this is perhaps not surprising. Because the event is sponsored by the Ministry of Defence and the Department for International Trade. And figures show that the UK has made ten times more out of arms sales to Saudi Arabia than it has given in aid to Yemen.

Speaking to The Canary, Andrew Smith from Campaign Against Arms Trade (CAAT) stated:

Saudi forces have killed thousands of people in Yemen, and have exacerbated one of the worst humanitarian crises in the world. Yet the regime is among those that are expected to fly into London next month for a government-sponsored arms fair.

But as the posters suggest, people are preparing to shut the arms fair down. As Smith said:

Thousands of people will be taking action in the days preceding DSEI, uniting to send the message that arms sales to dictatorships like Saudi Arabia can never be acceptable. If we are to end UK complicity in repression and injustice around the world then we must shut down DSEI for good.

Protests are taking place from Monday 4 September. Events include an Occupy camp and themed days of action, culminating in a “big day of action” on Saturday 9 September. In previous years, protests have included people stopping the arms fair being set up, blockades by rail, road and water of the actual arms fair, and much more.

One activist, Suzannah, has urged others to get involved:

The arms trade does so much harm to so many. Its role is clear in perpetuating internal repression, apartheid and wars across the globe… For me as a Londoner it is intolerable to remain inactive. I feel deeply compelled to do something practically to stop it. I would urge anyone that can make it to join us in trying to stop DSEI, because it is literally a matter of life or death.

And as one DSEI protester, Emma, told The Canary:

None of us have to put up with this trade in death and destruction. And we can do something about it. Come down to the ExCeL Centre during the first week of September and show the arms dealers and the government that we won’t let them continue selling their murderous wares.

– Donate to the crowdjustice appeal to support the legal costs of two activists who attempted to disarm a war plane bound for Saudi Arabia.