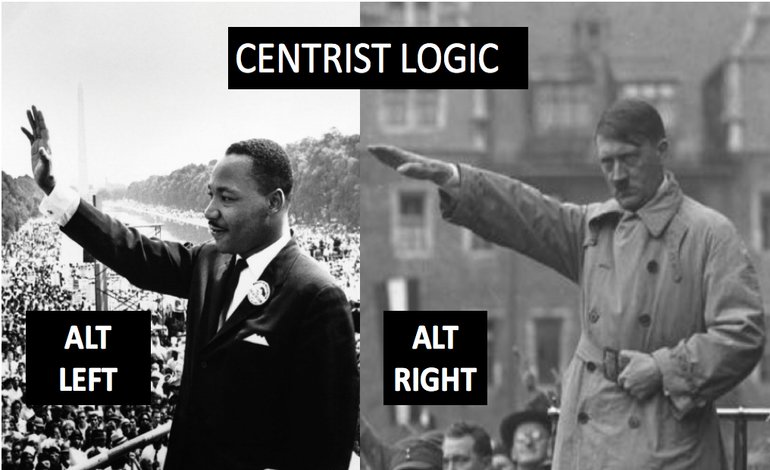 The liberal centre is failing to hold in the face of a resurgent right. Once again, while the left goes to war with the hostile forces of Nazism, the centrists demonise any response more direct than a candle-lit vigil. Like beer-addled sports fans, they hurl judgement from the stands while the real battle for the future rages on the pitch.

But one leading historic figure from the left wrote an open letter to these centrists in 1963. And it’s time they read it again.

There isn’t a liberal alive who couldn’t recite at least one line of Martin Luther King Jr’s ‘I Have A Dream’ speech.

But centrists are prone to whitewash King’s real life and struggles. Indeed, the reverend was a lot more palatable to the centre in death than he was in life. Just like the social justice activists of today, King faced a war on two fronts. The racist hatred of the right, and the fearful intransigence of the centre. Between the two, making rapid progress towards ethnic equality was nigh on impossible. But later, centrists had the gall to cleanse King’s story of all its furious power, and claim him as their own.

By the time of his assassination in 1968, King was considered a ‘divisive’ figure. He was unashamedly socialist, which set him at odds with the establishment; especially in the context of the Cold War. And the FBI considered him a subversive.

Following the famous speech above, Agent William C. Sullivan of the FBI unit set up to investigate King said:

In the light of King’s powerful demagogic speech yesterday he stands head and shoulders above all other Negro leaders put together when it comes to influencing great masses of Negroes. We must mark him now, if we have not done so before, as the most dangerous Negro of the future in this Nation from the standpoint of communism, the Negro and national security.

And King captured his frustrations in an open letter to the white moderates of 1963. The letter could have been written today. And every centrist should read it now, before they make the same mistake again.

King wrote this letter from a jail cell in Birmingham, Alabama, earlier in 1963. Just as counter-protesters rallied against the Nazis in Charlottesville recently, King marched the streets of Birmingham against the KKK and the white establishment. And in both cases, establishment figures in politics and the media presented the confrontation as a ‘clash’ of two extremes. In doing so, centrists created a false equivalence that served the far right well. I’ve written more on that here.

On witnessing the public criticism of his movement by ‘moderate’ white church leaders, King was incensed. And he wrote the letter, which began:

While confined here in the Birmingham city jail, I came across your recent statement calling my present activities “unwise and untimely.” Seldom do I pause to answer criticism of my work and ideas. If I sought to answer all the criticisms that cross my desk, my secretaries would have little time for anything other than such correspondence in the course of the day, and I would have no time for constructive work. But since I feel that you are men of genuine good will and that your criticisms are sincerely set forth, I want to try to answer your statement in what I hope will be patient and reasonable terms.

Those words, “unwise and untimely” are the standard criticisms of centrists. The change demanded by the left is always too much, too soon.

Throughout his letter, King systemically picks apart the moral and logical inconsistencies of this and other centrist arguments. And it’s time for the modern left to do the same.

We sympathise with your cause, but…

Throughout history, the centrist line remains the same: ‘We sympathise with your cause, but…’

The centrist view demands the oppressed remain perfect victims, to be saved by heroic liberals. Largely white and middle/upper class, they lament the plight of people of colour and the working class. But they actively oppose movements led by either. Victims of oppression will only gain support if they adopt the language, tone and methods of the centrists. If not, they are dismissed as extremists. This can end up making centrists as great a barrier to progress than full-on bigots. Because they have the power to delegitimise and undermine critical movements in the eyes of uninformed observers.

I must confess that over the past few years I have been gravely disappointed with the white moderate. I have almost reached the regrettable conclusion that the Negro’s great stumbling block in his stride toward freedom is not the White Citizen’s Counciler or the Ku Klux Klanner, but the white moderate, who is more devoted to ‘order’ than to justice; who prefers a negative peace which is the absence of tension to a positive peace which is the presence of justice; who constantly says: ‘I agree with you in the goal you seek, but I cannot agree with your methods of direct action’; who paternalistically believes he can set the timetable for another man’s freedom; who lives by a mythical concept of time and who constantly advises the Negro to wait for a ‘more convenient season.’

Such an attitude stems from a tragic misconception of time, from the strangely irrational notion that there is something in the very flow of time that will inevitably cure all ills. Actually, time itself is neutral; it can be used either destructively or constructively. More and more I feel that the people of ill will have used time much more effectively than have the people of good will. We will have to repent in this generation not merely for the hateful words and actions of the bad people but for the appalling silence of the good people.

Modern centrists frequently decry the ‘extremism’ of the left. They argue that, because the left and right seem emotionally-wedded to their ideals, they are ‘two sides of the same coin’. And it is perhaps the most insidious argument they deploy.

First, centrists hold their opinions no more lightly than those they criticise. Their politicians, pundits and journalists regularly use inflammatory, emotional language and logical fallacy to make their case.

Second, this argument overlooks the fact that some things require an uncompromising – or ‘extreme’ – position.

Respecting the basic value of human life regardless of ethnicity, gender identity, disability, class, or sexuality is one such thing. As King writes:

Was not Jesus an extremist for love: ‘Love your enemies, bless them that curse you, do good to them that hate you, and pray for them which despitefully use you, and persecute you.’ Was not Amos an extremist for justice: ‘Let justice roll down like waters and righteousness like an ever flowing stream.’ Was not Paul an extremist for the Christian gospel: ‘I bear in my body the marks of the Lord Jesus.’ Was not Martin Luther an extremist: ‘Here I stand; I cannot do otherwise, so help me God.’ And John Bunyan: ‘I will stay in jail to the end of my days before I make a butchery of my conscience.’ And Abraham Lincoln: ‘This nation cannot survive half slave and half free.’ And Thomas Jefferson: ‘We hold these truths to be self evident, that all men are created equal . . .’

In short, if we reduce ‘extremist’ to mean anyone who agitates unequivocally for their cause, we are all extremists – including centrists. The only question is: what are you going to be an extremist for? In the case of the centre, the answer seems to be: ambivalence. And this is unacceptable in the face of literal Nazis. This was captured beautifully by political satirist Kasia Babis, in a piece entitled: Famous Moments in History, Reimagined By Centrists. The cartoons showed how key historical moments would have looked if we followed centrist logic: 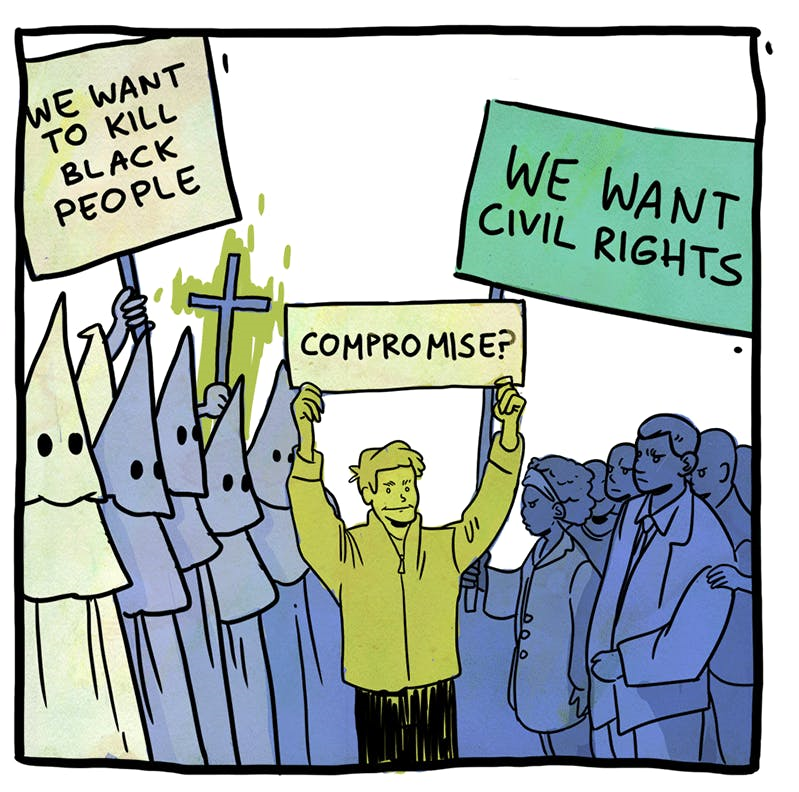 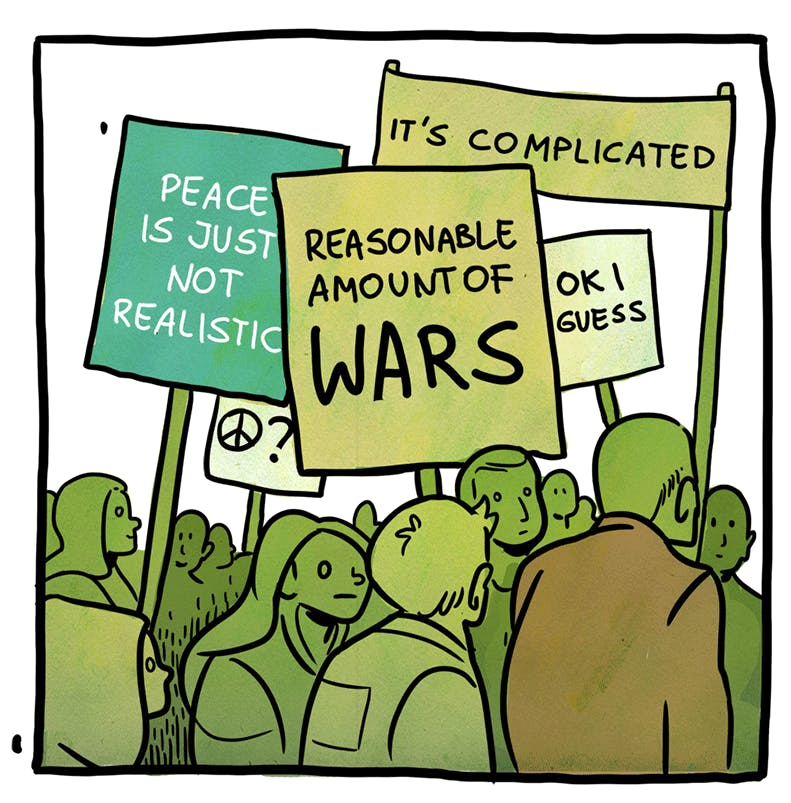 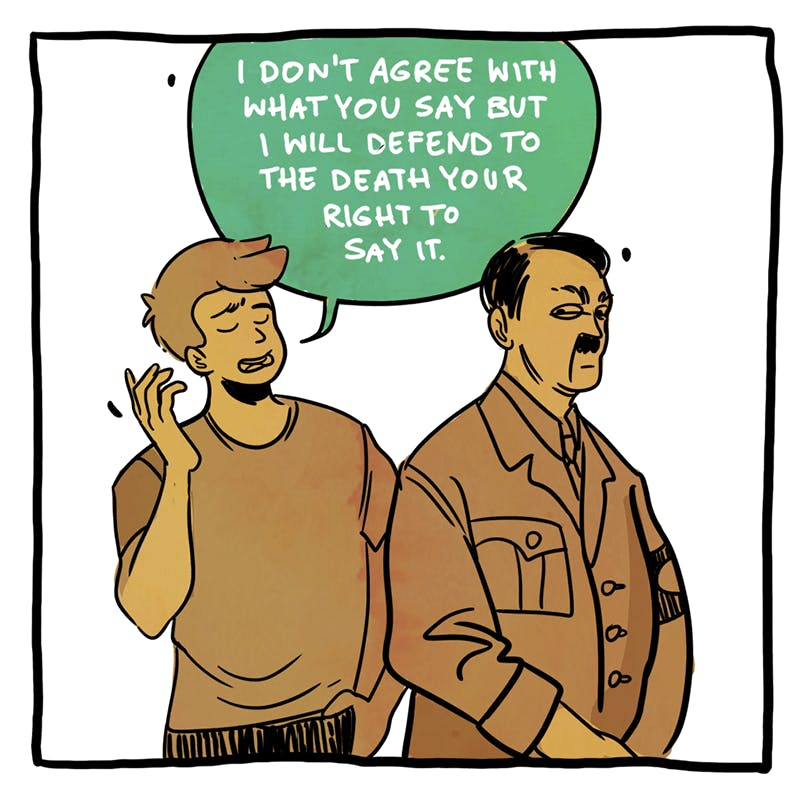 History doesn’t repeat itself, but sometimes it rhymes

It is not that centrists are without a role to fulfil in political life. By creating a context of acceptance for socially liberal ideas, they do us all a service. But they fail themselves and society when they decry those who advocate for those ideas in word and deed. There have been many lessons from history, warning of the dangers of extreme centrism. Perhaps the greatest comes from Martin Niemöller, a German Protestant pastor at the time of the Nazi holocaust. His infamous poem reads:

First they came for the Socialists, and I did not speak out—
Because I was not a Socialist.

Then they came for the Jews, and I did not speak out—
Because I was not a Jew.

The distaste that centrists hold for direct action can wind up abandoning the streets, our media, and our seats of power to people of extreme bad will. This is why you will often hear centrists cite the ‘I Have A Dream’ speech, while virtually none will be familiar with the letter from Birmingham city jail. If King were alive today, centrists would be treating him the same as they are currently treating the anti-austerity protesters, Black Lives Matter, and Jeremy Corbyn’s Labour movement.

If they don’t learn the lessons of the past, the centrists of our time will be doomed to repeat them; and to appear on the pages of our history books as no more than commas and full stops.

– Some great organisations you can support and rally with on issues that matter: