A former Labour MP came out of retirement to drop a truth bomb on the left, and it blew up in his face - The Canary 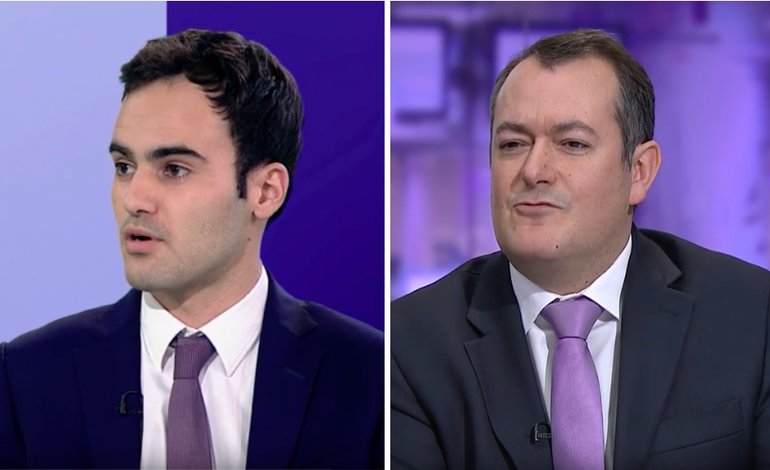 Former Labour MP Michael Dugher has launched an unprovoked attack on former Corbyn aide Matt Zarb-Cousin, in which he appears to taunt the former Labour spokesperson for his gambling addiction. Whatever Dugher’s intentions, it is fair to say this is an argument he lost, badly.

Who are these guys?

Michael Dugher was once spokesperson to Gordon Brown, eventually becoming a Labour MP in 2010. And on becoming leader, Jeremy Corbyn appointed Dugher to the shadow cabinet as Shadow Culture Secretary. After making a number of high-profile attacks on the Labour leader through the press and social media, Dugher lost his post in a reshuffle. He stood down as an MP ahead of the 2017 general election, predicting a Labour wipeout due to Corbyn’s leadership. He is now CEO of UKMusic, which describes itself as “an industry-funded body established in October 2008 to represent the collective interests of the recorded, published and live arms of the British music industry”.

Zarb-Cousin is a former parliamentary researcher and Corbyn aide. He has also lived with a gambling addiction. Writing extensively on the impact of Fixed Odds Betting Terminals (FOBTs) on his life, he has authored a column for iNews as recently as 21 August entitled Fixed Odd Betting Terminals almost led me to suicide – which covered his experience of becoming addicted to FOBTs. An addiction which would cost him thousands of pounds and very nearly his life. Since 2012, Zarb-Cousin has sought tougher regulation over the betting shop terminals, seeking to reduce maximum bets from £100 to £2.

The exchange began with Dugher picking up on a story by news website Politics Home about the departure of Steve Howell, Corbyn’s Deputy Director of Communications. Dugher joked that Howell had stayed on almost as long as Zarb-Cousin, who served as Corbyn’s spokesperson for 11 months:

But the matter quickly escalated when Zarb-Cousin clarified the tweet: 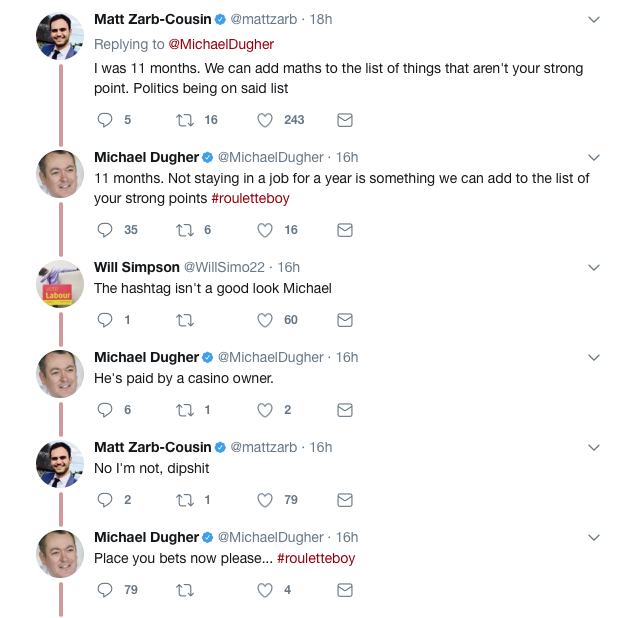 The ‘roulette boy’ hashtag was read by many to be a reference to Zarb-Cousin’s known history of gambling addiction.

Dugher argues that his comments were made about the relationship between Zarb-Cousin and millionaire Derek Webb. Zarb-Cousin has worked with the Campaign for Fairer Gambling since 2012 (with a brief break to join Corbyn’s office), in efforts to deal with Fixed Odds Betting Terminals. The campaign was co-founded by Derek Webb, who featured in Politics Home in 2015 alongside Labour MP Tom Watson, Zarb-Cousin, and others as part of the campaign.

Dugher argues that, because of Webb’s links to the gambling industry, Zarb-Cousin is “bankrolled by a casino guy”: 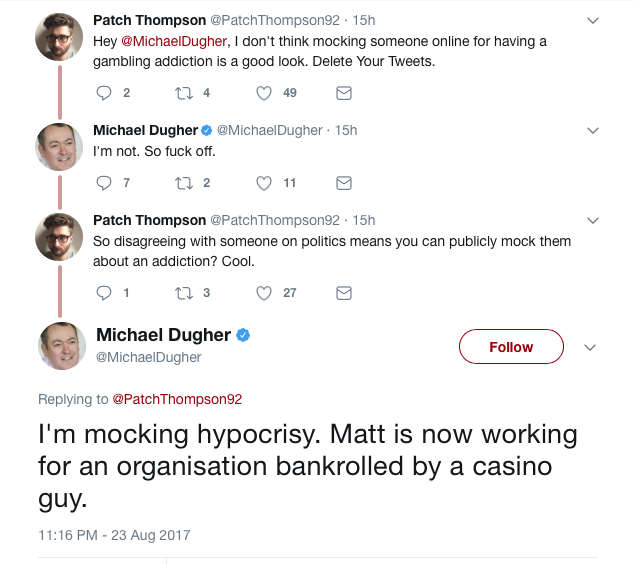 In a statement to The Canary, Dugher said:

As my Twitter account makes clear, my comments are made in a personal capacity and are not connected with my job.

Not for the first time, I was involved in a spat on Twitter with Matt Zarb-Cousin, who in the past has sent me abusive messages.

I was not in any way mocking Matt’s previous addiction to gambling. I was mocking his hypocrisy, and that of his campaign, because of the funding they receive from a man who admitted in The Times that he made his money from the casino industry. And who still retains financial links to the casino industry.

Like many MPs and former MPs, I have received abuse on Twitter directed at both myself and my family.

I have no hesitation in telling such people where to get off.

It is clear from the thread that both Zarb-Cousin and Dugher use terms of abuse, including “dipshit” and “prick” respectively.

The Canary raised this issue with Zarb-Cousin, who said:

I thought Michael might have more empathy for gambling addicts given his very own gamble to step down as an MP before the election didn’t quite pay off.

The Campaign for Fairer Gambling is philanthropically funded by Derek Webb and not commercially motivated. Unlike, for example, the betting industry whose freebies Michael Dugher enjoyed while the Shadow Secretary of State responsible for gambling.

According to The Mirror, Webb made around £15m from the casino industry in Las Vegas. In 2004, he co-founded the Campaign for Fairer Gambling, a not-for-profit organisation “striving for fairness in gambling”. His former business practices are clearly stated on the campaign website. And the campaign describes itself as “centred around the three licensing objectives of the Gambling Act 2005”, aimed at:

Webb has also made a number of personal donations to politicians and political parties. This includes a £25,000 donation to the deputy leadership campaign of Labour MP Tom Watson. Dugher was a key ally of Watson in parliament, and was chosen to lead the deputy leader’s ‘fake news inquiry’. The inquiry was supposed to report its findings in April of this year, but seems to have fallen by the wayside.

While Dugher was Shadow Culture Secretary, the government announced a review of FOTBs after the widespread issues related to the machines became unignorable. Dugher argued against a crackdown on betting shops, telling The Sun:

I welcome the government’s review but Ministers must take an evidence-led approach to problem gambling and not simply have a go at local betting shops which are at risk of closure.

According to the Register of Interests, Dugher also received event hospitality paid for by William Hill (Britain’s oldest – and one of it’s largest – firms of betting shops) around the same time: 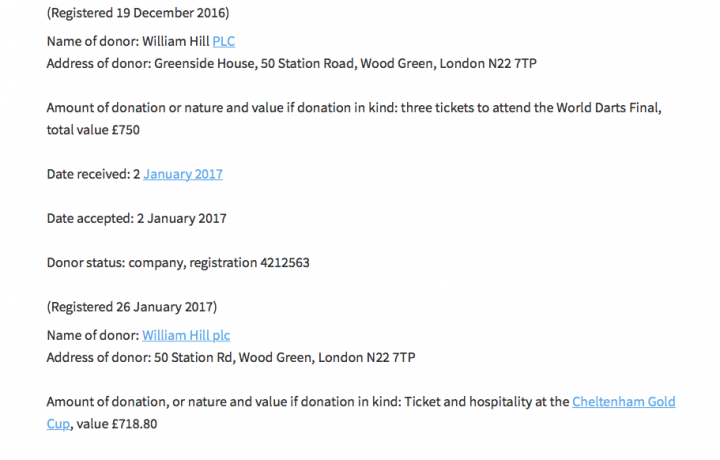 When all is said and done

Looking at the evidence, it doesn’t seem to matter what Dugher’s intention was. Either he was attempting to taunt Zarb-Cousin over his past gambling addiction, which would be in extreme poor taste and potentially in violation of Twitter’s standards of conduct. Or he was seeking to portray Zarb-Cousin as a hypocrite, which the evidence does not support. Worse, the evidence suggests Dugher is drawing a target on his own vulnerable flank. As journalist Abi Wilkinson points out:

It seems Dugher picked a needless fight, then lost it. Badly.

– You can learn more about the Campaign for Fairer Gambling here.

– If you or someone you know is struggling with gambling addiction, contact GamCare on 0808 8020 133 for support and advice.