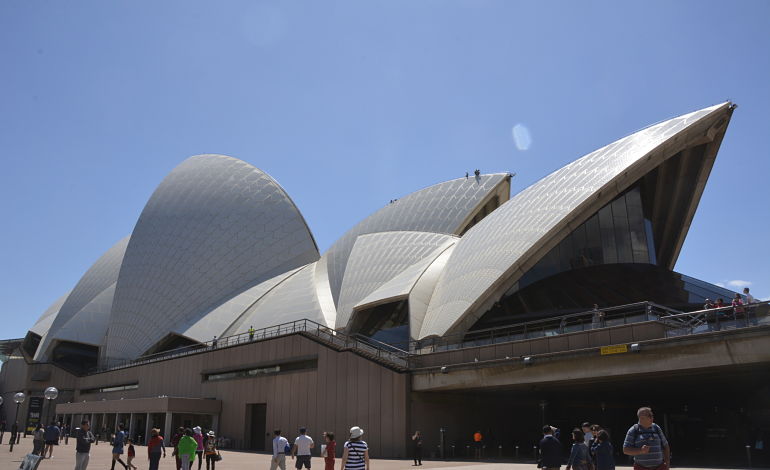 Activists have scaled Sydney Opera House in support of more than 600 refugees – all men – on Manus Island, Papua New Guinea (PNG). The refugees, who have been detained for more than four years, are refusing to leave a decommissioned detention facility, fearing violence from locals.

WACA (Whstleblowers, Activists and Citizens Alliance) activists on top of the opera house unfurled a banner, which read “Australia: world leaders in cruelty”.

We are here today because the Australian government is failing to uphold basic human rights. We call on both Liberal and Labor to end offshore detention and bring the refugees here immediately.

Right now men on Manus Island are starving, stricken with thirst, and suffering enormous torment. This is the result of incompetence, bigotry, and a sick political process. The Australian government must let New Zealand take 150 of the men today and bring the remaining 450 men to Australia and allow them to choose where they resettle.

Two of the activists:

The action is one of several that activists have carried out in solidarity with the refugees. This includes a blockade of the train line to Flemington racecourse.

The refugees are refusing to leave the Manus Island centre because they fear violence. Indeed, they have already witnessed murder, riots, beatings, suicides, and attacks by locals and the PNG navy. And recently, they have received death threats.

But the PNG authorities have told the refugees:

[The detention centre] will revert to PNG Defence Force and if you still remain here after demolition of the fences, you will be deemed to be unlawfully on a military base and will face eviction or arrest and prosecution.

And now PNG prime minister Peter O’Neil has threatened to use force to ensure the refugees are evicted. And members of PNG’s paramilitary force have reportedly been deployed on the island.

We are asking international community to protect us and guarantee our safety. I can feel in refugees' faces and voices that they are extremely scared.

Boochani also pointed out that the refugees’ detention is unlawful:

We didnt come to PNG by our will.Forcing us to live in PNG is against international law.Obligation is to protect refugees not send to danger

Meanwhile New Zealand has offered to take 150 of the refugees, but Australia has refused. This is despite a PNG court ruling that says Australia is no longer responsible for the detention of the refugees.

In response, over 60 prominent Australians have signed a letter to New Zealand prime minister Jacinda Ardern, urging her to deal direct with PNG.

We urge you to actively pursue negotiations with the PNG Government and the UNHCR Regional Representative to resettle as many of the men from Manus Island as soon as possible.

Australia is in violation of numerous international protocols relating to the treatment and detention of refugees. And in March 2015 the UN Special Rapportuer on Torture found that Australia’s indefinite detention of asylum seekers on Manus Island amounted to breaches of the Convention Against Torture and Other Cruel, Inhuman or Degrading Treatment or Punishment.

On that basis it can be argued that New Zealand – or indeed any other country – does not need the permission of Australia or financially dependent and authoritarian PNG to intervene and rescue the refugees.

That intervention would be an act of mercy.

– Read The Canary‘s articles on refugees.