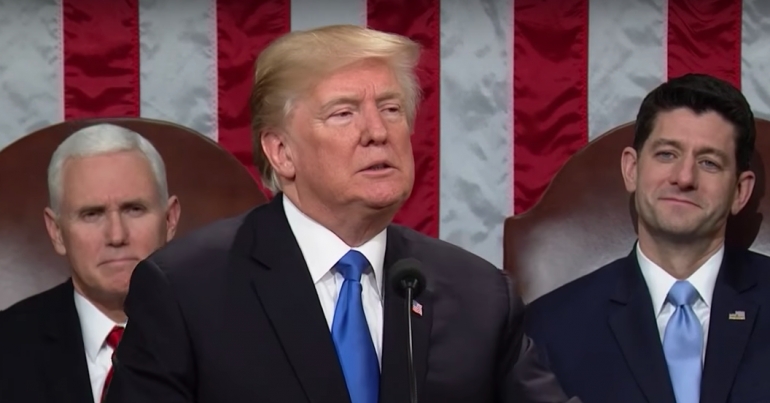 On 30 January, US President Donald Trump delivered his first State of the Union speech before Congress in Washington DC. It marked the first year he has spent serving as president. During the speech, he brought up the topic of his decision to recognise Jerusalem as the capital of Israel. And in doing so, he essentially called the countries that opposed the decision “enemies of America”. That would include the UK.

But some mainstream media outlets left that particular phrase out of their transcripts of the speech.

I recognised Jerusalem as the capital of Israel. Shortly afterwards, dozens of countries voted in the United Nations General Assembly against America’s sovereign right to make this decision. In 2016, American taxpayers generously sent those same countries more than $20bn in aid. That is why tonight I am asking Congress to pass legislation to help ensure American foreign assistance dollars always serve American interests and only go to friends of America, not enemies of America.

The case of the missing words…

While many mainstream media outlets published transcripts of the speech, some failed to include the line where Trump called these countries the “enemies of America”. CNN left it out. And so did The Guardian.

Guardian screenshot taken by The Canary at 3:45pm GMT on 2 February 2018

As The Canary previously reported, Trump said on 6 December that the US would recognise Jerusalem as the Israeli capital. He also stated that the US embassy would relocate from Tel Aviv to Jerusalem. The decision was highly controversial. Britain’s Shadow Foreign Secretary Emily Thornberry, for example, said the move threatened the peace process in Israel.

128 UN members then voted against Trump’s decision. Only nine countries supported the decision, including Israel (and the US). Meanwhile, countries that normally toe the line on Israeli issues – including France, Germany and the UK – rejected the US President’s recognition of Jerusalem as Israel’s capital.

Tension with the UK

While Trump spoke specifically about stopping US foreign assistance from going to “enemies of America”, his suggestion was apparently that any country – including the UK – which dared to oppose his policies on Israel could be seen as an enemy.

And Trump isn’t exactly being viewed too favourably on British shores either. A protest against Trump coming to the UK for a state visit later in the year – described as “one of the biggest demonstrations in British history” – is already being organised by journalist Owen Jones and the group Stop Trump. Around 100,000 people have now registered their interest on Facebook.

‘Enemies’ or not, 2018 definitely looks like it could be a tense year for transatlantic relations.