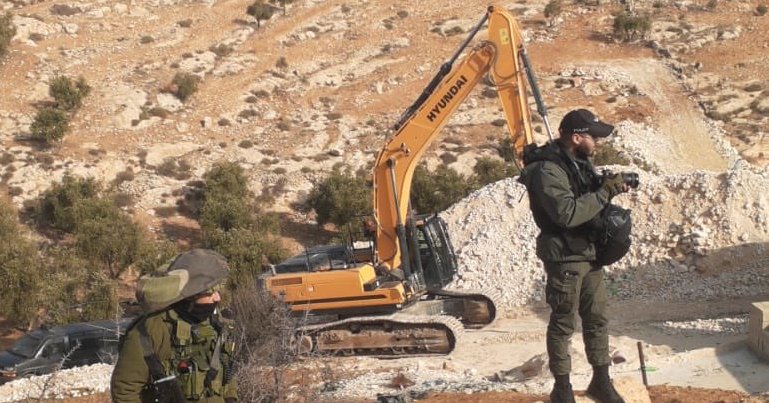 The Palestinian region of Masafer Yatta, in the South Hebron Hills area of the occupied West Bank, is under intense pressure from Israeli forces.

A 2022 Israeli High Court ruling said that there is no legal barrier to the complete eviction of the majority of the villages of Masafer Yatta. However, local people have vowed to remain on their land.

The violence against communities in Masafer Yatta continued on 3 January, with the demolition of a house in the village of Maeen.

Now Israeli Occupation Forces are demolishing a Palestinian house in the village of Ma3ein in the South Hebron Hills , Masafer Yatta #defendmasaferyatta pic.twitter.com/abxt2mr194

A day earlier, on 2 January, Israeli forces confiscated a bulldozer in the nearby village of At-Tuwani. The International Solidarity Movement (ISM) tweeted:

IOF stormed the village of at-Tuwani in #MasaferYatta, #southhebronhills, and confiscated a bulldozer. Palestinians need to pay hefty fines to have their possessions returned after these illegal confiscations. #SaveMasaferYatta #DefendMasaferYatta #FreePalestine #EndApartheid pic.twitter.com/eEYcbbbN0B

Both of these demolitions are part of a concerted military campaign to make life impossible for Palestinians living in Masafer Yatta.

Israeli forces carry out demolitions on a near daily basis across the West Bank, as well as within the borders of Israel. These colonial demolitions are carried out with a host of different justifications, but their intention is to push Palestinian communities off their land.

Certain areas of the West Bank are under increased pressure from Israeli forces. Right now those communities include Masafer Yatta, the Jordan Valley, several Palestinian areas in and around East Jerusalem, and the village of Al Araqib in the Naqab. These communities are under imminent threat of destruction.

Residents in Masafer Yatta have launched an international initiative to save their region. The Save Masafer Yatta campaign explained:

Masafer Yatta is an area in the South Hebron Hills of the West Bank, which is home to twelve Palestinian villages totaling about 2,800 residents. The area is spread out over about 35,000 dunam [a dunam is roughly an acre] of land, where agricultural communities have lived for generations.

In opposition to international law, which prohibits the expulsion of a population from its land and the use of occupied land for military training, the Israeli army declared the area Firing Zone 918, in the early 1980s, in order to dispossess Palestinians from their homes and strengthen Israeli settlements in the area.

Since this declaration, residents have lived under the daily threat of demolitions, evictions, and dispossession. Families in Masafer Yatta are denied access to their land, roads, sources of water, schools, medical services, and hospitals. This is in addition to nearly daily violence from settlers in the region.

The campaigners highlighted how damaging the Israeli High Court decision last year could be for the region:

On May 4th, 2022, the Israeli High Court issued its final decision in the decades-long case, rejecting the residents’ petition and giving the army the green light to forcibly evict these communities at a moment’s notice. If the Israeli army moves ahead with the eviction it will be one of the largest expulsions carried out by the State of Israel in recent decades, an alarming precedent that could lead to further expulsions across the West Bank, and a further escalation of Israel’s policies of annexation and Apartheid.

We must not stand by as Israel evicts and expels entire communities. We cannot allow Apartheid to go unchallenged.

The United Nations has confirmed that since the ruling:

Although the villages of Maeen and At-Tuwani lie outside the firing zone, the whole Masafer Yatta region is subject to increased colonial harassment, confiscations, and violence from the occupying forces.

The demolitions and confiscations in Masafer Yatta are continuous. The village of Isfey al-Fauqa is just one example of a community that has faced the colonising forces in recent months.

During 2022, residents living inside Firing Zone 918 decided to set up a school in Isfey al-Fauqa. The new school meant that local children would be able to get an education close to where they live, instead of walking over the hills to faraway communities.

However, soon after the school was established, it was knocked down.

I visited the village of Isfey al-Fauqa in November 2022 – after the first demolition – as part of a group of volunteers from the ISM, and met local residents. We wrote at the time:

We visited Isfey al Fauqa school the day before the second demolition took place. Local residents told us that the school had been established to provide education for 22 students – from the villages of Isfey al Fauqa, Isfey al Tahte, Tuba and Musa Zain – who would otherwise have to walk at least 4km over the mountains to get to school.

The determination of the people to stay on their land despite the violence and intimidation was tangible, even amongst the small children. Our group wrote:

The day before the demolition happened we played games with the kids inside the tents and helped to paint a mural on the rubble. One young boy told us “I love my school”, and a little girl sang a popular song to us over and over again. Some of the words she sang translate like this:

“You will find me on my land

I belong to my people, I sacrifice my soul for them

My blood is Palestinian”

The destroyed building had been replaced by tents, but Israeli forces soon returned to confiscate them. They threw sound grenades at local school children and residents in the process. ISM tweeted:

06.12.2022 – IOF demolished 2 temporary school tents in Isfey al Fauqa, in #MasaferYatta. The tents were set up by locals to keep providing education to the children of the Isfey school after it was demolished by the IOF on November 23. #SaveMasaferYatta #FreePalestine pic.twitter.com/G1gbJIkr9I

Residents of Masafer Yatta are calling for people internationally to join their campaign to save the area. Check out the Save Masafer Yatta website to find out how.

Masafer Yatta is one of the regions on the frontline of Israel’s ethnic cleansing policies. It’s up to us to show our solidarity as they stand their ground in the face of colonialism.

Featured image via Youth of Sumud (with permission)