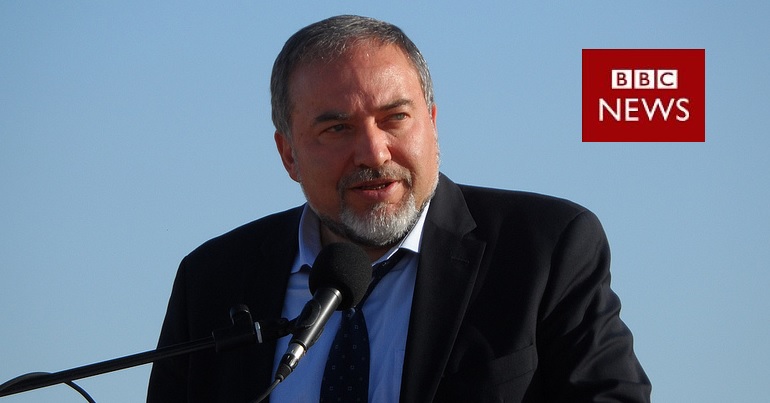 According to the Times of Israel, Liberman claims to have identified the source of the broadcaster’s bias against his country. That’s right. The defence minister says the BBC is biased against Israel. And he reckons, wait for it, that it’s Muslim people to blame.

But there are quite a few holes in his argument.

Liberman spoke to Hadashot TV on 18 May. During the interview, he spoke about media coverage of his country’s massacre of Palestinian people on 14 May. Israeli forces killed more than 60 people in a single day in Gaza while they were protesting.

Hadashot reportedly asked Liberman why Israel was ‘losing the battle’ on media coverage of what happens in Palestine. He replied:

There is one Jewish state in the world. There are 57 Muslim states, who all have much bigger budgets… Ultimately, the person who pays, gets to choose the music…

When you go now through all the international channels — from CNN, France 24, BBC — you’ll see that 90 percent of all advertisements come from the Muslim world.

First of all, there aren’t “57 Muslim states” in the world. There are only a few states, such as Iran, which officially declare themselves “Islamic”. The vast majority of countries, apart from these Islamic republics and Israel, don’t institutionalise religion in the same way. Because doing so, of course, can lead to discrimination against citizens who don’t practise the religion in question.

But that’s not the only issue with Liberman’s claim.

The defence minister effectively argues that the BBC and others get the vast majority of their advertising from countries that are majority Muslim. And he says that’s why the BBC is biased against Israel.

Liberman, however, obviously missed the BBC‘s reporting on the Gaza massacre. Because in story after story, it regurgitated Israeli propaganda. It referred to the one-sided slaughter of protesters as “clashes”. It invited pro-Israel ‘experts’ on its programmes to justify the violence, with no adequate opposing voices. And the BBC even had the audacity to run a story titled:

Did Israel use excessive force at Gaza protests?

As if that’s a valid question.

And this coverage isn’t an anomaly. The BBC is consistently pro-Israel in its reporting.

(The BBC insists, of course, that its “comprehensive reporting of the Palestine and Israeli conflict is fair and impartial”.)

But there’s another giant problem with Liberman’s theory when it comes to the BBC. It can’t be formulating coverage to please its advertisers because it doesn’t have any advertisers. The BBC is funded by a licence fee, paid by viewers.

So on all levels, Liberman’s argument doesn’t stand up. In fact, it looks like exactly the sort of baseless, racist trope that would be condemned if it were used against any other ethnic or religious group.