As Europe grills Zuckerberg about Facebook, Nigel Farage lets slip some 'secrets' of his own - The Canary 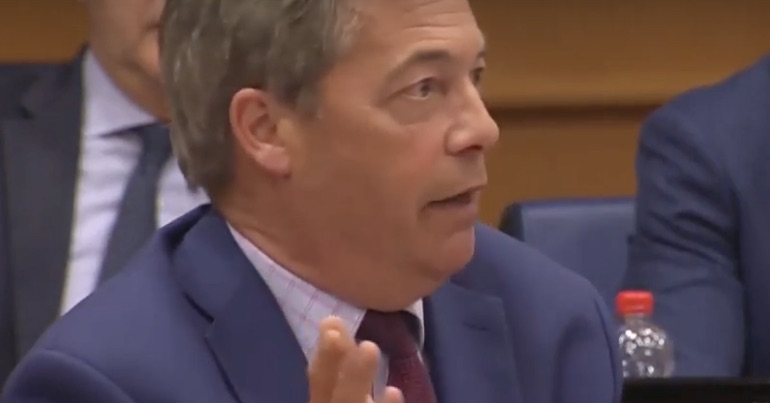 On 22 May, Facebook co-founder Mark Zuckerberg faced live questions at the European Parliament. He offered an apology for recent data breaches and the misuse of personal information. These came to light following the Cambridge Analytica scandal. But the speech from staunch anti-EU MEP Nigel Farage was quite astonishing.

Farage opened by saying he was “the largest user of Facebook in all the EU institutions”, telling Zuckerberg “I’m your best client”.

People on Twitter noted Zuckerberg’s face as he said this:

Even better WTF face from Zuckerberg as Farage goes off on one about how he's his biggest client in Brussels pic.twitter.com/hb7rHNfkx9

Also, it turns out what he said may have been misleading:

Farage lying again, this time about having the biggest following on Facebook. Farage has 786K followers while the EU Parliament has 2.5 million. Even Macron has 2.1M #Zuckerberg

Farage then went on, without the slightest shred of irony, to say:

There is no way that Brexit, or Trump, or the Italian elections could ever possibly have happened. It was social media that allowed people to get round the back of mainstream media.

Again, people commented on Zuckerberg’s face at this point:

It’s not surprising that Zuckerberg pulled a face. Because Britain’s Electoral Commission has fined Leave.EU – backed by Farage and Arron Banks – £70,000, for “multiple breaches of electoral rules” in the Brexit campaign. And as the Guardian has reported, former Cambridge Analytica director Brittany Kaiser confirmed that:

the firm pitched “a very detailed strategy” to Leave.EU on how it could use data and psychological profiling to microtarget people likely to back Brexit in the referendum.

But Farage didn’t stop there.

Farage then went on to criticise recent Facebook changes and said:

Since January of this year, you’ve changed your modus operandi. You’ve changed your algorithms. And it has led directly to a very substantial drop in views and engagements for those that’ve got right-of-centre political opinions… on average, we’re down about 25%…

According to a BuzzFeed tech reporter, this wasn’t quite true either:

Nigel Farage credited Facebook with allowing Brexit to happen and then said changes in the company's algorithm caused his traffic on the social platform to fall since January.

We checked and his traffic has been relatively steady.https://t.co/JeQI1gzpzZ

In questioning why his Facebook views were (apparently) down, Farage shared his thoughts [1.38]:

This is the same man who was accused of spreading “Nazi-style propaganda” with his Brexit ‘breaking point’ posters. He was the figurehead of a vicious Leave campaign which apparently led, according to the Guardian, to the worst “spike in hate crime… on record”. Reports of hate crime increased:

by 42%, to more than 3,000 allegations… across Britain in the week before and the week after the 23 June vote.

And let’s not forget some of Farage’s other ‘best moments’.

“Who are these people?”

Farage is convinced that Facebook isn’t impartial. He demanded to know “who are these people?” because, apparently, they limit his free speech.

Other MEPs, meanwhile, asked Zuckerberg a range of serious and pertinent questions. Unfortunately, most went unanswered.

Watching #Zuckerberg call the shots on when the meeting is over,and @EP_President shamelessly help him dodge tricky questions is saddening…
what kind of EP is this if it bends over backwards in the face of a CEO who knowingly plays around with the citizens that elected them?! https://t.co/F2yMTAdTK9

Today's session in the EP was a missed opportunity. An hour of questions, followed by a lengthy statement from Zuckerberg, with all difficult questions dodged. The format, which was agreed by Facebook, led to no real scrutiny. It is time that he appeared in front of @CommonsCMS

But Farage openly admitted that Facebook helped to win Brexit. So at least one question was answered, even if not by Zuckerberg.