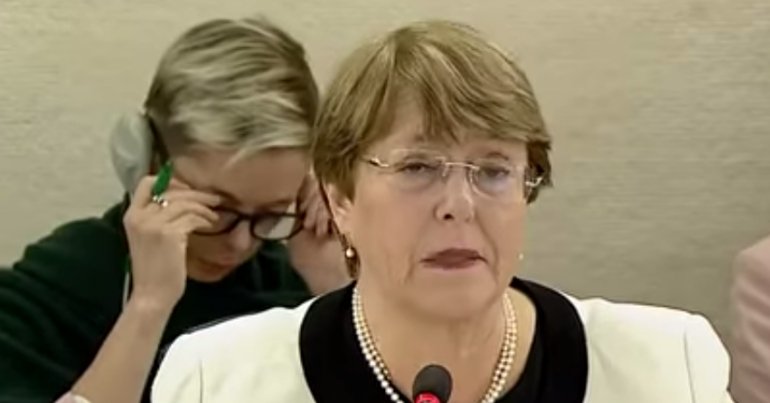 On 20 March, UN High Commissioner for Human Rights Michelle Bachelet made a statement about Venezuela. Unfortunately, her statement contained factual inaccuracies and failed to take into full account the deadly impact sanctions are having on the country.

Her words should also be contrasted with UN special rapporteur Alfred De Zayas who visited Venezuela. De Zayas said that the sanctions are “economic warfare”

But Bachelet’s statement about US sanctions failed to echo De Zayas’ damning analysis:

Although this pervasive and devastating economic and social crisis began before the imposition of the first economic sanctions in 2017, I am concerned that the recent sanctions on financial transfers related to the sale of Venezuelan oil within the United States may contribute to aggravating the economic crisis, with possible repercussions on people’s basic rights and wellbeing.

Firstly, economic sanctions were first imposed in March 2015 by the Obama administration, not in 2017. Obama declared a fraudulent “national emergency” that claimed Venezuela was an “extraordinary threat” to the United States.  Obama sold the sanctions as being “targeted” by making it illegal to deal with high ranking Venezuelan government officials. As US economist Mark Weisbrot pointed out, there is no way to “target” such officials without making investors afraid to deal with the entire government.

Donald Trump extended Obama’s “national emergency” to dramatically intensify the sanctions in August 2017. In the first year after Trump’s sanctions were imposed, they cost Venezuela’s government at least $6bn in oil revenues. Venezuela was importing $2bn per year in medicines while the economy was still growing.

Bachelet in denial about deadly sanctions

Trump’s sanctions are therefore killing people. But Bachelet failed to denounce them – only expressing “concern” that the most “recent” escalation of US sanctions “may” aggravate the crisis.

It’s therefore hypocritical of Bachelet to deny the impact of Trump’s sanctions while criticizing Nicolas Maduro’s government for failing to “fully acknowledge” the scale of Venezuela’s crisis.

Bachelet’s statement alluded to the argument, commonly used by US apologists, that the economic crisis preceded the sanctions. But US support for an insurrectionary opposition – going back all the way to 2002 – was a big factor in causing the crisis. Although it does not excuse the blunders that were made by the Venezuelan government, it is important to recognize and remember this.

Where is Bachelet’s “dissent”?

Bachelet also failed to condemn repeated threats against Venezuela’s government that have been made by US officials. Threats are illegal under Article 2 of the UN Charter. Trump’s national security advisor John Bolton has openly “joked” about Maduro being sent to a US-run torture camp in Cuba. Again, Bachelet’s hypocrisy is striking. She professed concern about dissent in Venezuela while it is threatened and sabotaged by a superpower.

The world’s most dangerous criminals have nothing to fear from Bachelet and similar “human rights defenders”. De Zayas, on the other hand, refused to pull any punches in his criticism. In an interview with the Independent, he stated:

“Sanctions kill,” he told The Independent, adding that they fall most heavily on the poorest people in society, demonstrably cause death through food and medicine shortages, lead to violations of human rights and are aimed at coercing economic change in a “sister democracy”.

Some of Bachelet’s critique of Venezuela’s record is valid. But by not “fully acknowledging” the role that US sanctions and threats play in the crisis, her credibility is undermined.