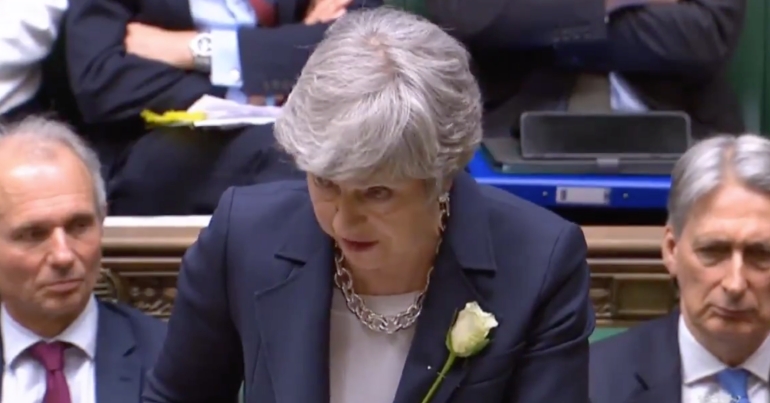 During Prime Minister’s Questions on 8 May, Theresa May was asked whether she will intervene over ongoing Kurdish hunger strikes in the UK and abroad. And she pledged to encourage her Turkish allies to ‘uphold human rights’. But she now needs to prove her words aren’t just lip service.

Plaid Cymru MP Liz Saville Roberts questioned the PM over whether she would take action as a matter of ‘urgency’ given the critical condition of Kurdish hunger strikers. Those on hunger strike include Ilhan Sis (also known as Imam) in Newport. Sis is currently on day 143 of his indefinite hunger strike and, as his friend recently wrote, “is close to death”. The strikers want Britain to put pressure on the Turkish government over the appalling prison conditions of Kurdish leader Abdullah Öcalan.

Saville Roberts highlighted that she and 49 MPs and Welsh Assembly Members have:

written to the foreign secretary, asking him to apply pressure on Turkey to uphold the human rights of the Kurds.

I am confident that the prime minster respects the urgency and the gravity of the situation. Will she please commit to intervening?

As Plaid Cymru tweeted, it hopes this message can “make Westminster listen”.

Thousands of prisoners across Turkey are on hunger strike. Kurdish MP Leyla Güven started the hunger strike while in prison. Now at home, Güven has not eaten for 182 days and is also critically ill. The indefinite hunger strike is calling for an end to Öcalan’s solitary confinement and to allow him access to lawyers and family visits.

Öcalan co-founded the Kurdistan Workers’ Party (PKK), which has fought for Kurdish freedom and autonomy since the 1970s. He has been imprisoned by Turkey for 20 years. Turkey has defined the PKK as a ‘terrorist group’. Most Western states have followed suit, as they see Turkey (which stands accused of war crimes against Kurdish people) as a key trading partner and NATO ally. European courts, however, have insisted on numerous occasions that the PKK is simply a party to an ongoing conflict, not a terrorist organisation.

In her response, May acknowledged it was an “important issue” and that:

We absolutely expect Turkey to… take any legal processes against prisoners fairly, transparently, and with full respect for the rule of law.

She also said the British ambassador has been in touch with the Turkish government and that:

It’s unclear, however, whether May is also going to “encourage” the Turkish government to uphold the human rights of the prisoners’ mothers, who are regularly attacked by police for protesting outside prisons. Nor did May explicitly reference the demands of the hunger strikers regarding Öcalan’s prison conditions. And there was no mention, of course, of the fact that the UK is one of the biggest arms exporters in the world, and Turkey is one of its priority markets.

Keeping up the pressure

The parliamentary question, and May’s response, is another sign that the hunger strikes are working and having an impact.

On 5 May, Öcalan’s lawyers held a press conference. After eight years, they had finally been allowed a one-hour meeting with him. As Sis said:

Although isolation is still in place, this visit was a remarkable achievement of our resistance and a blow to the fascism of the Turkish state.

But he also said this was not enough to end the hunger strike:

both for loyalty to the other comrades engaged in this resistance, especially those in prison, and because our demand to end isolation has not been granted.

Pressure is mounting on both the UK and Turkish governments to end the isolation. May’s words might just be lip service, especially considering that the UK continues to profit from selling Turkey weapons. But the fact that this issue is now in parliament, and there has been a visit to Öcalan, is progress.

Many people are going to die. We’re going to lose all these lovely people. When these people die, it will mean that humanity has died.

Pressure is mounting. But time is running out. And it’s down to all of us to do everything we can to put pressure on the UK and Turkish governments.