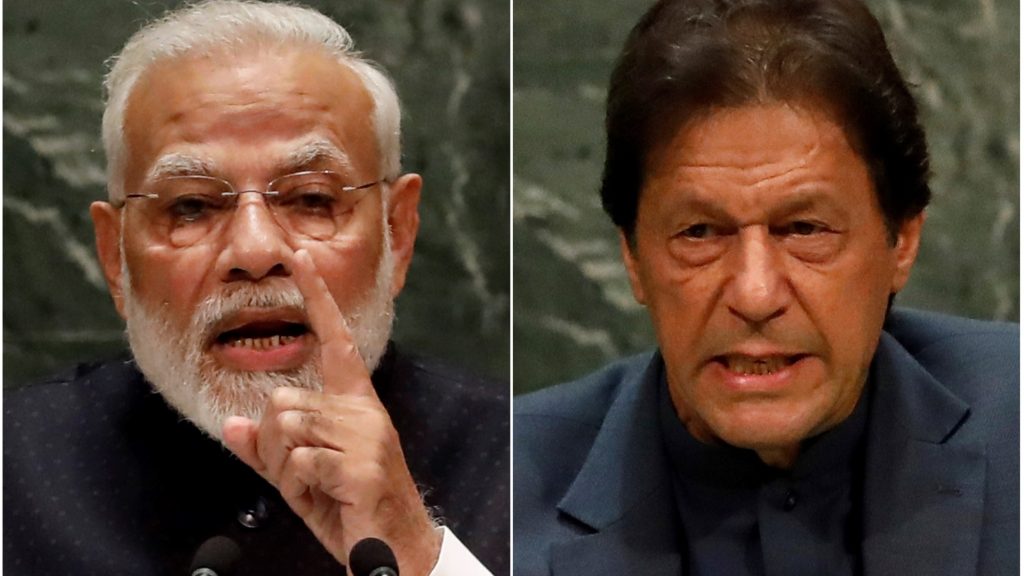 Pakistan’s leader has denounced his Indian counterpart and warned that any war between the nuclear rivals over the occupied region of Kashmir could “have consequences for the world”. In early August, Indian MPs passed a bill stripping statehood from the Indian-administered part of Kashmir amid an indefinite security lockdown. The government of neighbouring Pakistan immediately warned that these actions could lead to war.

India’s leader took the opposite approach at the UN, skipping any mention of his government’s brutal crackdown in Kashmir.

Two nuclear powers are on the brink of war. The world must pay attention.

Khan has not shied away from mentioning the countries’ nuclear arsenals, and previously said:

A sane mind can’t think of a nuclear war…

I’m worried that, if this goes on, there can easily be a miscalculation. And that’s why the United Nations must act.

Indeed, as the Intercept says:

Indian officials have publicly indicated that they no longer intend to abide by a “no first use” nuclear weapons policy in any future conflict.

At the UN in New York, the Pakistani prime minister expressed alarm for the potential of nuclear war with India and his disappointment for the lack of action from the international community. #India #Pakistan pic.twitter.com/v7KmcD2Mhy

The Intercept explains that there have so far been reports of:

thousands of detentions, cases of torture and death, and a communications blackout that has severed Kashmir from the rest of the world.

Scholars of Kashmir have called this process a constitutional occupation, and see the repeal of Article 370 as a “decades-long plan” to annex Kashmir.

And as she previously explained:

Since the 1990s, through a decade of armed struggle against the Indian state, state violence in Kashmir has taken its toll. …

The Jammu and Kashmir Coalition of Civil Society reports more than 70,000 killings, about 10,000 enforced disappearances and 7,000 mass graves (PDF).

India and Pakistan have fought two of their three wars over the Himalayan region. They have been locked in a worsening standoff since 5 August, when Modi stripped limited autonomy from the portion of Kashmir that India controls. His Hindu-nationalist government imposed a sweeping military curfew and cut off residents in the Muslim-majority region from virtually all communications.

“One silver lining in Modi’s actions”, the Intercept says, “has been the unintentional internationalization of the conflict” – because “after years of being relatively ignored, Kashmir is on the front pages of newspapers around the world”.

As India’s recent actions have forced a significant deterioration in the situation, meanwhile, progressive leaders have spoken out.

The situation in Kashmir is deeply disturbing. Human rights abuses taking place are unacceptable. The rights of the Kashmiri people must be respected and UN resolutions implemented.

And he has called for “urgent dialogue between India and Pakistan over the situation in Kashmir”.

Kashmir is also becoming an issue in the 2020 race for the White House:

Modi campaigning for Trump. Bernie Sanders addressing the Islamic Society of North America condemning Modi on Kashmir. And today doubling down against India. Now India is part of the US elections in a way I haven’t seen before. https://t.co/q40fmnFu6a

I believe the U.S. president must speak clearly in support of international humanitarian law and in support of a UN-backed peaceful resolution between India and Pakistan that respects the will of the Kashmiri people. Unfortunately, Trump has chosen to abandon the United States’ global leadership role. He is remaining silent on the Kashmir crisis while planning to hold a public rally with India’s prime minister.

Issue of Killings/Genocide in Kashmir!! Watch what Bernie Sanders is saying about Kashmir!! Salute to you Sir!!! @BernieSanders pic.twitter.com/KfadyXo8Pq

This issue will not go away any time soon

Khan said there were currently 900,000 members of Indian forces in the region, policing eight million Kashmiris.

“What’s [Modi] going to do when he lifts the curfew? Does he think the people of Kashmir are quietly going to accept the status quo?” Khan said.

“What is going to happen when the curfew is lifted will be a bloodbath. They will be out in the streets. And what will the soldiers do? They will shoot them. Kashmiris will be further radicalised.”

An hour before Khan spoke, Modi addressed the UN meeting with a speech that failed to mention Kashmir directly. But he has previously defended the Kashmir changes as ‘freeing the territory from separatism’.

Ahead of their appearances at the UN, residents of Indian-controlled Kashmir expressed hope that their speeches would turn world attention to an unprecedented lockdown in the region. And as the two leaders spoke on Friday, large duelling protests supporting and opposing India’s action in Kashmir were taking place across the street from UN headquarters.