The far right is pushing for riots over Brexit. And media outrage is nowhere to be seen. - The Canary 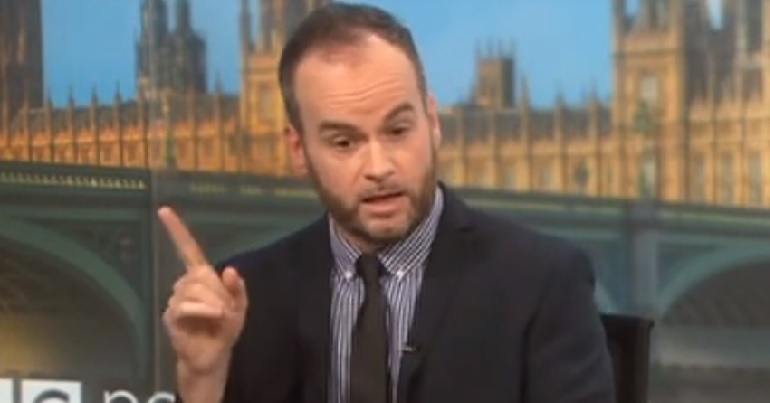 Right-wing agitator Brendan O’Neill has said on national TV that there “should be” riots over Brexit. But at a time when Britain’s hard right is growing in confidence and getting increasingly incendiary in its rhetoric, there seems to be little media outrage over his comments.

Imagine I, or another socialist, went on the BBC and called for riots. Just imagine what the reaction would be. pic.twitter.com/3SmpSiHPP8

He and others, meanwhile, pointed out that less prominent voices have faced punishment for essentially saying the same thing:

We'll soon find out if the law treats a privileged right-wing commentator calling for riots on national television differently to drunk young idiots doing the same to much smaller audiences https://t.co/boua3r5Pla

Just a reminder that two young men got four-year jail sentences for incitement to riot, in 2011 – in the less prominent context of two "let's riot" FB pages, not on terrestrial TV https://t.co/wWycKtHt6r

Media pundits and politicians have said a lot about the tone of political debate in recent years. Because we live in a country where papers like the Daily Mail have referred to at least one MP as a “traitor” and called judges “enemies of the people”. It and other right-wing rags have used this kind of language consistently. Indeed, just days after the 2016 murder of Labour MP Jo Cox (whose killer said “death to traitors” in court), the Mail called for Labour to “kill” its leader Jeremy Corbyn.

Current PM Boris Johnson, meanwhile, has suggested that attempts to stop a no-deal Brexit mean “surrender”, and his allies in the hard-right media have echoed this warlike terminology. His rhetoric is right out of the playbook of figures like Donald Trump and Steve Bannon. But just this week, he called claims that his language was dangerous “humbug”, and he argued that the only way for MPs to be ‘safe’ was to ‘get Brexit done’. His chief adviser Dominic Cummings also said the same thing to an MP who’s received death threats. And this comes as a man aggressively tried to break into MP Jess Phillips’s constituency office.

On the day Boris Johnson refused to apologise for his inflammatory language, someone has been arrested trying to enter @JessPhillips’ office. When an MP can’t do their job and represent their community due to threats to their safety it’s the people, and democracy, that suffers.

This week I received an anonymous letter to my constituency office here is what it said. @10DowningStreet might think we are "humbugs" about his words but they are literally being used in death threats against me. pic.twitter.com/au6E0v9CpI

Corbyn and members of his cabinet have spoken out very clearly against this aggressive rhetoric:

"The Prime Minister's language is encouraging people to behave in a disgraceful and abusive way towards other public figures. I've witnessed it myself on the streets of this country."
Jeremy Corbyn.#BorisJohnson #ResignJohnson #JohnsonMustGo #GTT0.#JC4PMpic.twitter.com/tKUjGsVxHp

I have constantly called out abuse publicly against elected MPs including to Tories as I think our democracy is built on mutual respect for difference and the rule of law. What’s being unleashed is ugly and should be condemned by all.

Bring in the firefighters

There should be media uproar about the tone of hard-right debate. Because an MP has died at the hands of a far-right extremist, other MPs are receiving death threats, and according to recent reports:

The number of right-wing extremists in custody under terror laws last year increased to the highest level on record, official figures show.

Both the media and parliament, meanwhile, have become safe spaces for anti-Corbyn abuse. Former PM David Cameron, for example, openly claimed the Labour leader was “Britain-hating” and called him and his anti-war colleagues “terrorist sympathisers”. The far right, meanwhile, has targeted Corbyn numerous times and expressed a desire to kill him.

But whether the media establishment steps up or not, one thing is clear. With the fire of fascism growing, we need to bring in the firefighters. And that means Jeremy Corbyn – the man who has consistently stressed “I don’t do abuse” and has famously won numerous peace prizes. Because while others push the tone of public debate to dangerously low levels, Corbyn continues to stand tall as the adult in the room. That’s why he’s exactly the kind of leader Britain needs right now.