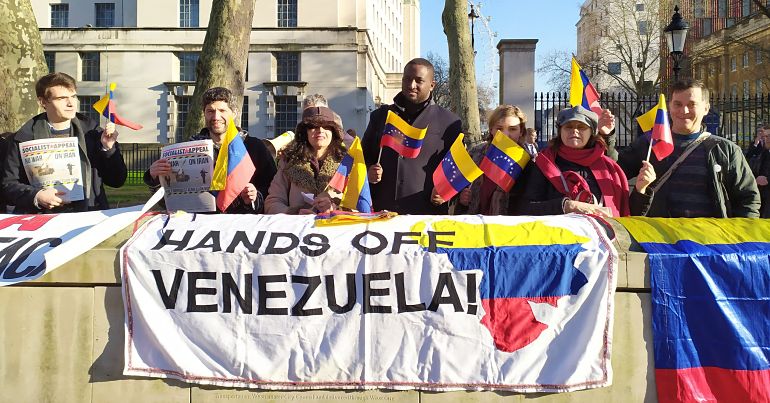 On 21 January, Venezuela’s self-declared ‘interim president’ Juan Guaidó arrived in London to meet with UK government officials and members of the Venezuelan diaspora. This is the first time Guaidó has visited the UK since launching a series of coup attempts in January 2019.

Guaidó’s visit was kept under wraps until Monday 20 January, when a video emerged of him discussing his travel plans alongside US secretary of state Mike Pompeo.

The Rastrojos and others like them are true terrorist groups. They kill more North Americans each day than Al Qaeda.

However, they are allies of those who claim to fight terrorism.

Guaidó met with UK foreign secretary Dominic Raab; Boris Johnson was reportedly due to “drop in on the discussion”.

Guaidó later met with members of the Venezuelan diaspora in a London restaurant. On Wednesday, Guaidó will travel to the World Economic Forum in Davos to meet world political leaders.

It is understood that Guaidó’s world tour is an attempt to counter a loss of political momentum over recent months, and request more devastating economic sanctions against Venezuela. According to a report by the Center for Economic and Policy Research (CEPR), US economic sanctions killed 40,000 Venezuelans between 2017 and 2018.

Over the past 12 months, the UK government has consistently supported Guaidó’s attempts to topple the government of President Nicolás Maduro.

In late January 2019, the UK foreign office urged the Bank of England to grant Guaidó access to £1.2bn of Venezuelan gold reserves.

The department for international development, meanwhile, has pledged some £40m of ‘humanitarian assistance’ to Venezuela. It has not, however, revealed where this assistance is going.

A last-minute protest was organised in London against Guaidó’s visit. Journalist Mohamed Elmaazi, who attended the demonstration, said:

The protest was organised at the last minute, but there were around two dozen people there from all sections of the political demographic. It was organised by Hands off Venezuela, which was founded in 2002 following the first US-backed coup attempt against former Venezuelan president Hugo Chavez.

Hands Off Venezuela secretary @marxistJorge explains the reasons for today's protest against the presence of Juan Gauidó in London (VIDEO @MElmaazi) pic.twitter.com/muLCNIy2PH

At the time of writing, the British press has largely ignored his visit.