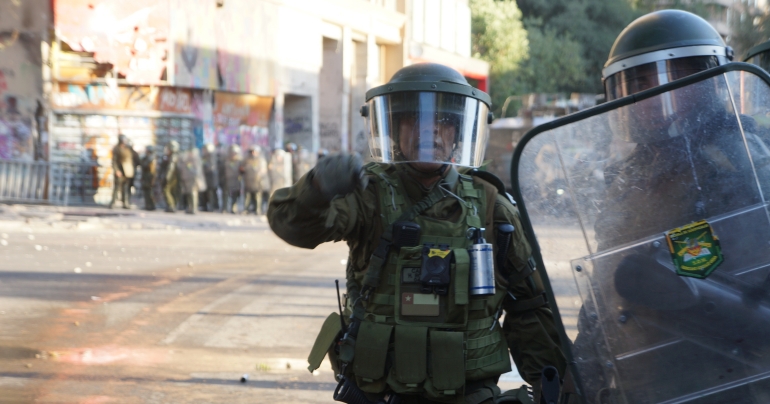 Police violence in Chile has reached shocking levels with reports that two children aged 14 and 17, in the Southern city of Talcahuano were shot by armed police officers on the afternoon of Wednesday 18 November.

Witnesses claim that the children who reside in a SENAME (children’s services) care home threw stones at the patrol who then responded by firing into the residence that was packed with children and care workers.

Demanding an end to police violence

In the capital Santiago hundreds of protesters took to the streets to demand an end to police violence. But they were fiercely repressed with tear gas and water cannons. The protesters also demanded that prisoners arrested during last year’s uprising are released. To date, there are still over 2,000 political prisoners being held on scant evidence via draconian terror laws enacted by the Pinochet regime. These laws effectively outlaw protest.

It is reprehensible that nearly 50 years later we are seeing the state’s security forces acting with the same impunity as they did during the dictatorship. These crimes are targeted, systematic and in violation of international law on human rights. They have no place in a healthy democracy and the responsibility for them goes all the way to the top of Piñera’s government.

Military police chief Mario Rozas resigned on Thursday 19 November due to a public outcry.  But president Piñera’ continued to defend Roza’s track record saying he “appreciated and admired the police chief’s work”, and said Rozas had served at an “extraordinarily difficult and complex time”.

This is despite a plethora of human rights abuses both during the social protests of last year and the draconian measures imposed during the coronavirus (Covid-19) pandemic. Last month Chilean police threw a 16-year-old boy off a bridge into a shallow river leaving him for dead.

Like much of Chile’s current socio-political infrastructure, the police force has not been significantly reformed since the dictatorship. Human Rights Watch has stressed that reform is necessary. But despite the United Nations investigating and then condemning widespread police abuses during last year’s social uprising, in which over 400 people suffered eye wounds, thousands were tortured, and dozens sexually abused, this has not yet taken place. On the contrary, violence is escalating, and Chilean police continue to operate with impunity.