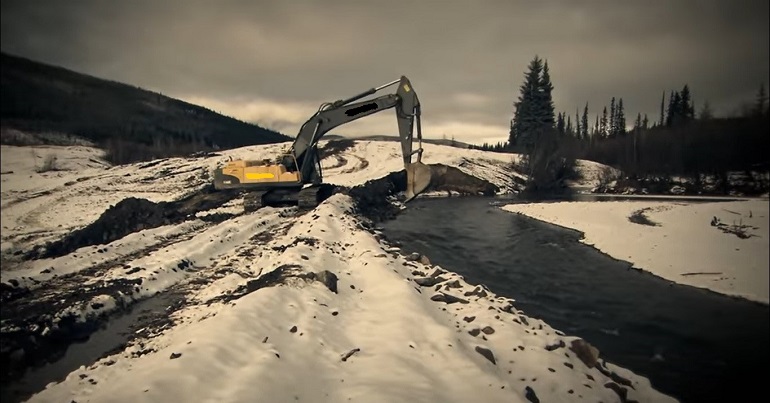 As we reported in November last year from the COP26 climate summit, gold and copper mining companies are trampling on the rights of communities where they mine. This is especially troubling in the midst of a climate emergency as gold and copper have been earmarked to help transition to a more environmentally friendly economy.

Since that November article, we’ve connected with other communities potentially facing a similar fate. According to them, even before mining companies lift as much as a spade, local people feel excluded from the decision-making process.

In this article we report on a community in South America and another in the west of Ireland. In addition to environmental and community wellbeing concerns, community members say they haven’t been properly included in the mining application process. And as we highlight these campaigns, media in the north of Ireland reports that mining companies from Ireland and Turkey have agreed a joint venture to dig for yet more gold in County Armagh. This is just 40 miles from Dalradian Gold’s proposed goldmine site in County Tyrone on which we’ve extensively reported.

If transitioning to copper and gold is one of the ways we’re to wean ourselves off fossil fuels, we need to ensure this isn’t done at the expense of people’s health. Additionally, local communities need to be front and centre of any consultation and planning process. Because shutting people out and inflicting untold environmental damage can hardly be the right way to go about this.

Gold mining has a horrendous environmental and human rights record across the planet. This would naturally make communities fearful of it coming to their doorstep. And it appears as if community fears are being heightened by a lack of proper consultation. Canadian mining companies claim they have:

prioritized building and maintaining respectful, strong and trusting partnerships with communities impacted by, or with an interest in, mineral exploration and mining activities.

But that certainly wasn’t the experience of the indigenous communities The Canary spoke to at COP26. Nor is it the experience of the Wapichan people of the South Rupununi district in Guyana. Representatives of that community spoke to The Canary about the Guyanese government’s agreement for the resumption of mining and exploration activities in the Marudi Mountain area.

never consulted in a proper way. The way it was carried out was in a slap dash manner

James said that despite the environmental protection agency’s request that the company fully engage with these communities, it never happened. This Wapichan people’s campaign group described the government’s agreement with the Canadian mining company as adding “insult to injury”. They also claim they only came to know of this agreement through Facebook:

The Guyana Geology and Mines Commission (GGMC), Romanex, Canadian-owned mining company Aurous, and the Rupununi Miners Association signed an agreement on [17] November [2021] to resume mining operations at Marudi Mountain, within the ancestral territories of the Wapichan people of Southern Guyana. The agreement was conducted without any participation or consent from the Wapichan people, who are the traditional owners of the lands in question and those who will be forced to live with the consequences of these decisions long after these miners have departed. To add insult to injury, the Ministry made no attempt to inform, let alone consult, the Wapichan people – who only learnt about this agreement through the Ministry’s Facebook post.

It could lead to full scale mining… and much worse

The Guyana government says the agreement just allows for “the resumption of mining operations by small-scale operators and exploration activities”. But local people fear this is the thin end of the wedge. They told The Canary they fear it will eventually be upgraded to full scale mining.

James said mining would bring “other associated activities” that the community does not want. Because this is what happened in the past. He also fears “pollution of the waterways” as well as deforestation and attacks on traditional activities such as hunting and fishing.

Immaculata Casimero, co-founder of the Wapichan Women’s Movement and SRDC’s communications officer, said the mining company doesn’t show respect to their community leaders. Additionally, she said the Wapichan people’s offices were attacked and their property stolen. More worryingly, Casimero said instances of rape have also been reported. She attributes all of these offences to mining activity.

James and Casimero spoke to The Canary in November 2021. And when we contacted them in recent days, they said nothing had changed in terms of consultation. Casimero said their “leaders still haven’t seen a copy of the agreement that was signed”.

The lack of consultation isn’t just confined to Guyana. Communities living close to the Burren UNESCO site in County Clare in the west of Ireland spoke to The Canary. They also have concerns over what mineral exploration could do to their community. Minco Ireland, which is owned by Dalradian Gold, is applying for a prospecting licence to explore for base metals, barytes, gold, and silver near the Burren.

Green Party leader Eamon Ryan is minister for the Irish Department of the Environment, Climate and Communications. Ryan’s department says the exploration is “not likely to have a significant effect on the environment”. His department publicly announced its intention to grant this licence on 9 December 2021. It then allowed people 30 days to lodge objections to the licence. These 30 days ended just before midnight on 8 January.

However, the timing and timeframe of the announcement shocked many in the community. The public announcement was made on a government website just before the holiday period. And campaigners say they knew nothing of it until January.

Emma Karran of the Futureproof Clare campaign group said local people first heard of the mining licence application on 4 January 2022. She added that local landowners and elected representatives were also taken by surprise. On its Facebook page, the group added:

Due to Covid-19 restrictions and the Christmas/ New Year period since the 9th Dec 2021 when the intention to grant prospecting licences was made public, it is felt that inadequate time for public consultation or awareness nor for the preparation of submissions has been given.

There is a clear breach of the Department’s Guidance for Good Environmental Practice in Mineral Exploration, which states:

2. Those involved in exploration activities should make themselves fully aware of any ecological or heritage sites of interest within or adjacent to the boundaries of their prospecting licence such as Natura 2000 Sites (Special Areas of Conservation and Special ProtectionAreas), National Parks, National Heritage Areas (NHA), proposed National Heritage Areas (pNHA) and National Monuments.

10. There should be full consideration and close liaison with relevant landowners and regulatory authorities.

that the Department firstly extends the deadline for the submission of objections, as it was incorrect to make the application over the Christmas season and furthermore action would be hampered due to the Omicron outbreak.

Secondly that adherence is given to Department’s Guidance for Good Environmental Practice in Mineral Exploration, most notably the necessary act of communicating with landowners and local authorities. There was not a single communication made with either.

And thirdly, that due consideration is given to the fact that these explorations are being considered for areas that are under ecological and heritage protection on national and European level.

Karran said there are grave concerns about the effects this mine could have on the local water supply. She added that campaigners were hopeful of “at least a week’s extension”. Within that time, according to Karran, they hope to “really make as much noise as we can about it”.

The damage from mining

Campaigners in County Clare highlight the worrying environmental track record and business associations of Dalradian. This was uncovered by Corporate Watch and reported by The Canary in August 2019. Campaigners in Guyana say:

We have seen despoiled lands already in our territory, and we have no desire to see more.

James told The Canary that because of a lack of regulation in the area:

things have gone to an almost Wild West situation

This, according to James, has contributed to “social ills” and “environmental concerns” in this region. Casimero added:

we know mining is reopening but there are environmental and social impacts that need to be taken into consideration.

Proper consultation is the minimum requirement

The FPIC [Free Prior & Informed Consent] principles… need to be upheld and need to be adhered to in the strongest way possible. If not, it is not going to happen in a proper way. You’re going to be having huge and lots of impacts on our communities

Furthermore, Casimero stressed the environmental and community importance of resolving this because:

Our villages are dependent on the forests, the rivers the creeks for hunting, gathering, fishing. If mining is to continue without proper systems in place… well it’s going to have detrimental impacts on our lives as Wapichan People.

From speaking to both community representative organisations, it’s clear they feel excluded by the powers that be. Disrespecting local communities through shoddy consultation will do nothing to inspire confidence or trust that the transition to green energy can be responsible.

That trust and confidence can only come through, as a minimum, respectful and timely consultation with local people. So far there’s been little sign of that. As long as that shoddy attitude continues, it’ll be left to communities to remain vigilant. They’ll also need to ensure their elected representatives are working in favour of their long-term and environmental interests.