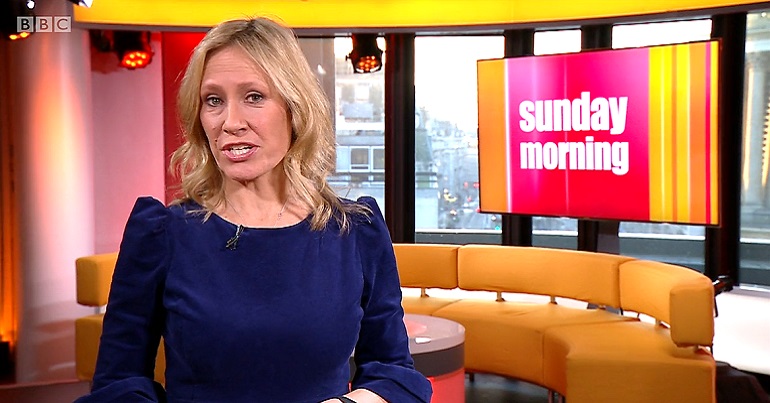 Sunday Morning has replaced the Andrew Marr Show. The latter’s host said he was leaving the BBC last year. According to the Guardian, Marr will be focusing on “writing and presenting political and cultural shows” for the likes of LBC. He also said he was “keen to get my own voice back”. Although biting his tongue over his political and social views never seemed a problem for Marr on his show.

From making light of the coronavirus (Covid-19) pandemic to allowing Tory ministers to lie, via repeating government lies and playing-down of the pandemic, Marr was always protecting the establishment. Not that him doing this was new. Because who can forget the infamous clip of him lavishing praise on Blair after the second invasion of Iraq?

But now, Marr has gone – with Sophie Raworth replacing him.

The first thing some people on Twitter noticed was that Sunday Morning had some technical issues:

Sound and camera work have been dreadful on #SundayMorning. All sorts of banging going on in the background. They still building the set?

Hate to say it @BBCOne but the sound on #SundayMorning is terrible. Poor @sophieraworth as it's her first show. Is someone running around in the background or jumping up and down?!

And in true Marr style, some people thought Raworth’s grilling of politicians was “biased”.

#Marr #Marr #SundayMorning
Same old !!!!
It was perfect opportunity to change format
Still boring unexciting uninspiring and biased
Sophie Raworth chip of old block Interuptor of Rachel Reeves allows waffle from Nadhim Zahawi
Not worth getting up for !!!

And Nicholas was unimpressed with Raworth’s opening monologue (a bit like Marr’s previous downplaying of the pandemic):

#SundayMorning ie #Marr without Marr, starts with the premise 'We have to learn to live with Covid', no debate, just a statement like it's fact. It will explore the Plan C of cutting self isolation times, of being endemic, when it's not, variations still exist. A vile start.

And in terms of guests, it was also ‘more of the same’. Labour’s shadow chancellor Rachel Reeves implied she wasn’t against the forthcoming National Insurance increase – just that her party wouldn’t raise it in April. This comes after uproar over shadow health secretary Wes Streeting’s comments about using private companies to clear NHS waiting lists.

Following Reeves, education secretary Nadhim Zahawi lied about Labour calling explicitly for another lockdown at the end of last year.

But overall, the problem with Sunday Morning was the same as with most BBC political and current affairs output.

Part of the establishment ecosystem

As I previously wrote for The Canary:

[BBC] journalists are from the Marr school of bias: entrenched so deeply into the system they barely even realise the narrow, establishment-defined parameters within which they operate.

The BBC always has been, and always will be… part of the establishment “ecosystem” in the UK, and globally. This makes it the most noxious of media outlets.

Given Sunday Morning is little more than a barely rebranded Marr, it appears that it’s still this business as usual at the BBC.