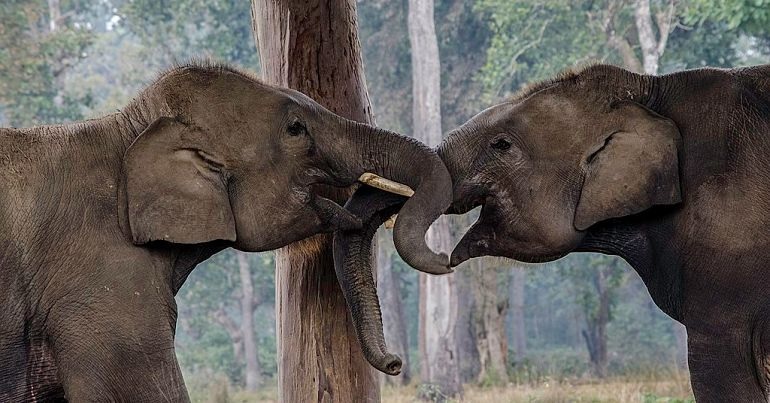 A lonely elephant is a stressed elephant. And a traumatised young elephant lives with impacts of that trauma for decades. That’s according to the findings of two recent studies.

The more we discover about the inner lives of these magnificent beings, the less justifiable any trade – which also subjects them to loneliness and trauma – in their lives becomes.

The most recent of the two studies looked at the social behaviours of “semi-captive” Asian elephants in Myanmar. These are elephants people force to work in the logging industry. Researchers studied a group of 95 elephants over a period of four years to investigate different aspects of their “social world”. As Phys.Org reported, the findings are based on accounts from the people who use the elephants for logging, alongside analysis of the elephant work groupings, and testing of their dung for stress hormones.

For female elephants, the study suggested the presence of babies lowers stress levels. According to Phys.Org, the researchers also expect that females would find solitude stressful, as they live in groups that are largely made up of other females in the wild.

In short, the study suggests that friendships and social groups matter to elephants. Arguably, this isn’t news to anyone, as the social complexity of elephants is widely recognised. That’s why the UK has rules that insist female elephants must have social contact with other elephants in zoos, apart from in rare instances. In practice though, elephants continue to live lonely lives even with those rules in place. Anne, an elephant in Longleat Safari Park, has lived without the company of another elephant for 20 years.

A further study published in February showed that childhood trauma has a long-term impact on elephants. Namely, elephants subject to the trauma of watching their parents killed at a young age struggled to fully recognise the scale of threats later in life.

As study author Graeme Shannon explained, the elephants were “less able to differentiate between the roars of different numbers of lions” than other elephants who hadn’t experienced such trauma. The researchers played the single roar of a lion and the roars of three lions together to the two different elephant groups over a three-year period. The elephants who hadn’t experienced trauma adjusted their behaviour according to the level of threat posed by a single lion versus a group of lions. But the other group didn’t. Instead, they showed “a similar high probability of defensive bunching in both situations”, Shannon said. This bunching involves older elephants forming a “defensive ring” around the younger ones. The Bangor University Zoology lecturer warned:

This overreacting to every situation could potentially result in increased use of energy, loss of feeding time, and injury risks.

The overreaction is likely due to both the trauma’s direct impact and the elephants not having older females around to learn from. As with humans, other animals pass down knowledge through generations. This is true for male elephants too, as a prior study indicated. That research showed that younger male elephants are calmer when in presence of older males, which lowered their risk of coming into conflict with people and other animals.

Older elephants are, however, often in the crosshairs of the wildlife trade, targeted by hunters for their larger tusks.

A thriving and egregious trade

These studies’ findings invite comparisons with the wildlife trade and its impact. They suggest that stress is part and parcel of captive elephants’ lives, deprived as they are of chosen and natural social groupings. As biologist Keith Lindsay told The Canary:

In zoos, males and female elephants don’t get to choose their own companions, and both sexes are moved around for breeding purposes – males in particular, may be shifted between several zoos over the course of a few years. They – the boys – are typically kept on their own.

Moreover, many elephants forced into tourism undergo a training regime involving extreme physical and mental torture, which undoubtedly induces stress and is in itself traumatic. The findings further speak to the implications for the future of elephants unfortunate enough to witness their elders gunned down by thrill-seeking trophy hunters.

The more that we learn about elephants, the more egregious their use in the wildlife trade becomes. The fact that species of elephants are endangered across the board, with African forest elephants critically endangered, makes the situation even more intolerable.

Nonetheless, trade in elephants, including as trophy hunting targets, is thriving. And India is considering introducing policies that critics warn will increase the live elephant trade further still. The UK, meanwhile, is apparently considering backtracking on policies that could limit the trade. According to reports, the country’s Animals Abroad Bill now hangs in the balance. It promised to place a ban on the import of certain hunting trophies and to stop the advertising of unethical tourism, among other things. The UK government has meanwhile insisted that it remains committed to implementing a trophy hunting import ban.

Until authorities adopt meaningful and comprehensive policies regarding the wildlife trade, however, they’ll continue to be a foe – not friend – to elephants.