UK to have a Referendum on Reality next - The Canary 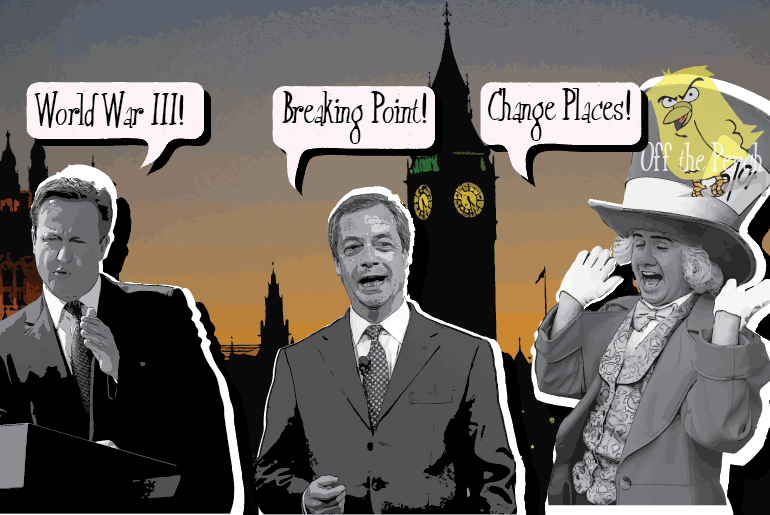 The idea grew from the realisation that we’re now living in an era of post-truth politics, and that the head-banging drivel being peddled by both sides of the Referendum debate is simply our chosen path’s most obvious conclusion.

In fact many would argue that our politics can’t even manage the incoherent narrative of bad literature, sitting as it does somewhere between a minor Dan Brown novel and a piece of particularly illiterate toilet graffiti.

The Referendum on Reality will ask – should we:

a)  Grow up, kick-out all of the backwards-talking tw*tbots, and attempt to cook a new politics in the bubbling pot of varying ideas – as opposed to the festering toilet of varying degrees of corruption?

b)  Go full-on fiction, and have George R.R. Martin come in as the writer?

Critics of the first option have pointed out that hardly anyone has ever tried to do honest politics before, and as such it’s doomed to failure – just as any option that doesn’t continue the status-quo is apparently doomed to failure – a status-quo which coincidentally benefits the people who are crying foul.

They’ve also said that if we go the full-on fiction route we’ll be able to replace all of our odd-bod politicians with top-quality actors – employing Jason Statham as Jeremy Corbyn, Helena Bonham Carter as Theresa May, and Clyde the Orangutan as Nigel Farage.

Critics of the second option have argued that after a few seasons it would likely descend into WWE-style absurdity, and that you’d have Question Time being replaced with some sort of Royal Rumble, and Prime Minister’s Questions replaced by people hitting one another with chairs.

Although, to be fair, either one of those changes would probably be an intellectual step-up.

Regardless of which option we choose, however, it’s clear that the current political pantomime is not pleasing anyone, as people are either forcing themselves to watch because they appreciate the vested interest we have in the country actually working, or because they simply enjoy rubbish television and think that Celebrity Big Brother is a bit too up-market.