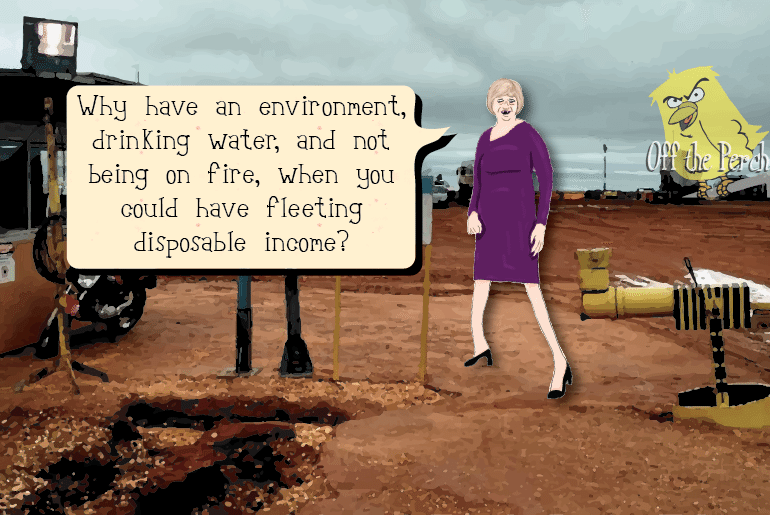 When Theresa May told home owners that they could be paid £13,000 for allowing fracking in their area, most right-headed people thought:

£13,000!? And all that I have to put up with is potential water contamination, possible earthquakes, a small chance of my tap water catching fire, heavy industry, an unnecessary blight on the surrounding area, and the likelihood that my house’s value will crash like a bowling ball through a wedding cake?

That’s great – assuming of course that the pound will be worth something by then – but why wouldn’t it be!?

However, it’s now been suggested that the government is dishing out these bribes primarily to put the public in a position of having to sign contracts. The benefit to the government would be that these contracts would potentially negate the option for people to sue for damages in future – especially for the sort of damages which fracking is widely suspected of producing.

We spoke to the Conservatives’ newly appointed Secretary of Cementing Over the Environment to find out what they have planned:

We realise that £13,000 sounds like an insulting amount of money to offer someone for the sort of misery that fracking will potentially inflict. However, what you need to remember is that it’s already horrible up North, and that your average Northerner earns less than £13,000 in a lifetime.

We’ve priced it, and £13,000 will afford your average bitter drinker:

I should probably point out that I am myself from Lancashire, and as such am more than happy for all of this fracking business to take place in Yorkshire. Largely because they’re a load of flat-cap, vowel-drawling, pie merchants.

Or is that us?

It’s actually fairly difficult to maintain petty, ill-thought out prejudices against them, as most of the stereotypical insults of Yorkshirites are exactly the same as those levelled against Lancastrians.

Whatever the differences are anyway, be assured that they are vast and irreconcilable, and also that the people in Yorkshire love fracking – they told me so.

Theresa May, meanwhile, is currently having contracts drawn up for us all to sign. The fact that she is cackling maniacally whilst doing so is probably just coincidental, and I’m sure she has simply remembered an amusing anecdote about someone being found ‘fit for work’ or something.