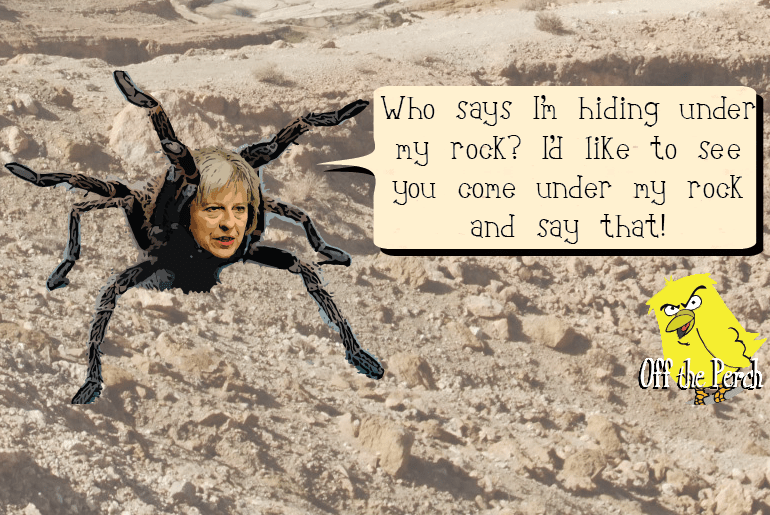 Tarantula May, a.k.a. the Prime Minister of Great Britain, was forced to decamp from under her rock this morning, so that she might strike out at one of the many creepy-crawlies she surrounds herself with.

The creepy-crawly in question was Ken Clarke (who in fairness is one of the less creepy ones – probably best described as some sort of stinkbug as opposed to the party’s more usual leeches, ringworms, and parasites). Clarke had drawn attention to himself by accusing Tarantula May of having no policies whatsoever. He also suggested that, since getting into power, the PM had primarily been skulking under a rock – waiting for easy political capital to walk past so that she might quickly overwhelm it.

This is what Clarke had to say:

Sure – having a terrifying, eight-legged nightmare as PM seems impressive. As soon as the opposition realised that her only tactic is to hide in one place though – waiting for unsuspecting victims to come to her – the fear was obviously somewhat diminished. That’s why Labour have been able to stay out of Tarantula’s reach and pelt her with facts and ideas.

You can say what you will about David Camer-worm – he may have been politically blind and had a head that was identical to his arse – but at least the fellow wriggled about the place a bit.

Ken Clarke has also been joined by the political cockroach Nicky Morgan, who has returned from the nuclear-shoeing she received earlier this year to suggest that by not joining in the political debate, Tarantula May was allowing others to shape it for them.

Which is obvious. Although no one seems to have explained to Tarantula May that as Great Britain’s most public face, she would occasionally have to show her face in public.

Theresa May responded to the idea that she has no policies by leaping out at the two rebel MPs and hissing:

What about my Ken Clarke and Nicky Morgan eating policy?

The PM then retired back into her lair where she gorged herself on the soft insides of her rivals – the only part of her prey she’s evolved to stomach.