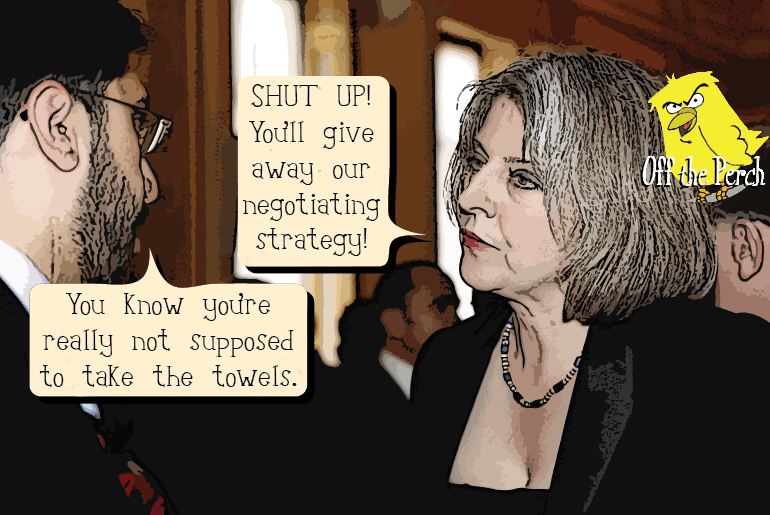 Many predicted that Theresa May would return from India empty handed. But she proved otherwise by scoring some towels, a bathrobe, and a shower curtain, and taking a few selfies to prove it happened.

There were several reasons why people predicted the Indian trade visit would fail to bear mangoes. The first is that most countries simply won’t enact deals with us until we’ve sorted out our affairs with the EU and the World Trade Organization (WTO). A process that may take up to ten years. And the reason they won’t is the same reason you wouldn’t arrange to marry someone who was already going through a messy and protracted divorce, while simultaneously being on fire.

India would also like to arrange a better immigration deal for itself in return for access to its financial services. Which would be beneficial to us in both directions. But, well. We’re not really driven by common sense anymore. We’re driven by ill-thought-out reactionary sentiment and deceitfully constructed right-wing headlines.

There’s also a question of whether their people will want to come to Great Britain in the first place. Especially as we are now more colloquially known as “F*ck Off Island”.

What part of “leave” did you not understand?

Despite our insistence that we should be given everything we want, the Indian government refused to hand it over. Unfortunately for them, Nigel Farage got wise to their crafty bullsh*t, and marched on the post-talks banquet with 100,000 patriots.

And this is what he shouted at the Indian government as he entered:

Remoaners! Remoaners! You are ignoring the will of the British people! And you will bow to our demands, or me and my 100,000 men will march on you like nobody’s business!

Please forgive me, my English must not be so good. I thought you said 100,000 people, but all I see are yourself, Katie Hopkins, and 20 or so people whose faces are filled with the sweaty terror of someone who sobered up ten minutes ago and now has no idea where they are.

While the argument continued, Theresa May shoved a plate of popadoms into her handbag, and fled to take selfies with them in the toilets. Which was an achievement in itself, as despite the entire banquet having been free, she managed to hone in on the one foodstuff that is traditionally complimentary anyway.