Nation in shock after Theresa May actually answers a question 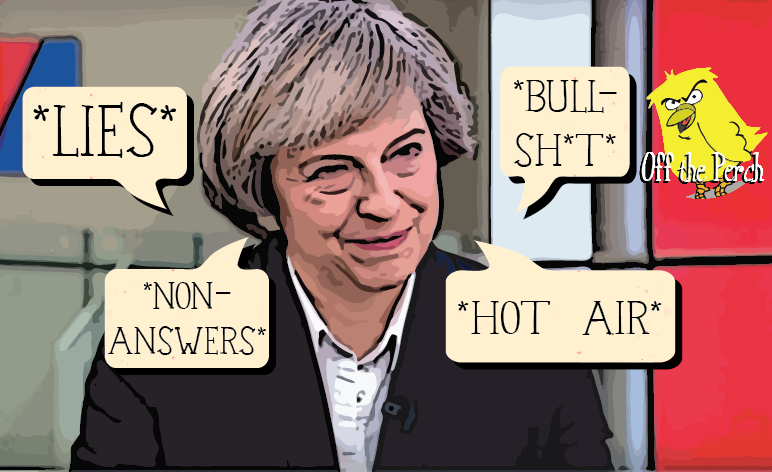 Great Britain was left in shock today, after Theresa May actually answered a f*cking question.

Theresa May has built up a bit of a reputation at this point. Well, actually she’s built up several reputations – none of which are particularly flattering. And yet, it’s her reputation for never answering a question that she’s becoming most famous for.

Which is why people who force themselves to watch Prime Minister’s Questions were dreading her return. Because the whole deal has now taken on the following pattern:

VIEWER: *REACHES FOR THE BOOZE*

VIEWER: *PANICS BECAUSE THE SOUND IS STILL COMING OUT OF THE TELEVISION SPEAKERS*

VIEWER: *GOES TO FIND THE SLEDGEHAMMER*

VIEWER: *TAKES OUT WHAT’S LEFT OF THE TELEVISION/LIVING ROOM*

"Smart" as in "rat-like cunning" obvs

So you’re probably wondering what question she actually answered. And unfortunately, you’re definitely going to be disappointed. Because it really wasn’t anything very much. But it was, at least, a start.

To explain what happened, we spoke to barista Eleanor Rugby from the Westminster branch of Starcups:

She’s been coming in here for ages, right, but this is the first time she actually answered anything. Usually, she walks up to the counter and just stands there. Pulling a face like she’s trying to stop her alien-body from crawling out of the person-suit she’s wearing.

So I’ll say to her, ‘what do you want?’ And she’ll say something like, ‘well I think my being here makes it very clear that I would like to order a drink’. ‘Okay’, I’ll say to her. ‘So what drink do you want to order?’ And she’ll answer that she’s ‘determined to negotiate for the best drink on offer’. So I’ll suggest that we do that, and she’ll tell me that she ‘doesn’t want to give a running commentary on her negotiations’! And by this point, I’ll be fuming; shouting at her to just f*cking order something! And she’ll say ‘it’s crucial that I order a drink, and indeed that I have access to the tastiest drinks available’! AND THEN I’LL JUST SCREAM AT HER TO GET OUT OF MY F*CKING CAFÉ!

But today she came in and told me what she wanted straight away. What did she order? She wanted a weak and lukewarm tea with too much milk in it. So basically exactly what you’d expect.

We contacted Downing Street to find out what could have changed with the PM. And unfortunately, it transpired that she’d actually just suffered a fairly serious blow to the head as a result of a low-flying heron. They also assured us that she’ll be back to her vague and non-specific self in no time.

*REACHES FOR THE ALCOHOL*