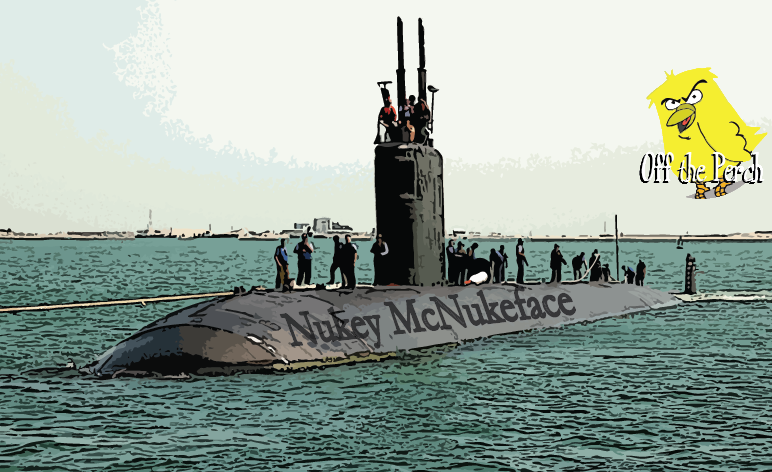 Following an embarrassing, fumbled, and arse-headed denial, the PM has come clean. Namely by admitting that yes, she did know Trident misfired, and no, she didn’t pass that information on. And yet, she has also come up with a plan that could see her emerge from this cesspit of scandal relatively un-filthed. A plan which would see the Trident submarine, HMS Vengeance, renamed Nukey McNukeface.

ISIS now thinking that if they provoke the UK, we'll respond by accidentally firing all of our nukes at Florida#trident #fuckme #deterrent

Some people were shocked to discover that one of our nuclear submarines was called HMS Vengeance. Although what else would you call it? It’s designed to revenge-kill several cities’ worth of innocent civilians, so you can’t call it HMS Rational. Although it could be called something less dramatic, like HMS Spite-Fire or HMS F*ck You Too. Or, going off the recent failed test, HMS Premature Retaliation or HMS Whoopsie.

We spoke to a senior Tory to find out where the Nukey McNukeface idea came from. At least we think it was a senior Tory anyway. It could just as easily have been a politically literate vampire:

If there’s one thing that 2016 taught us, it’s that all people really want is for things to be called Something McSomethingface. And the biggest disappointment of 2016 was when we ordered that Boaty McBoatface should be named the RRS Sir David Attenborough. You’d think it would have been when David Bowie died or when Nigel Farage lived, but no.

Obviously, we got a real kick out of causing that disappointment, but it also made us think. And what we realised is that we can get away with pretty much anything if we distract people with a funny name. Which is why we’ve been getting away with so much privatisation in the NHS since we introduced our new Head of Corporate Strategy, Scammo McScamface.

And it doesn’t stop there

Having realised this one simple trick, the Tories are seeking to make all of their more odious politicians more palatable. As a result, the following members of government will be renamed:

So expect plenty of media coverage on how ridiculous this is, while the government quietly gets on with perpetrating evil.