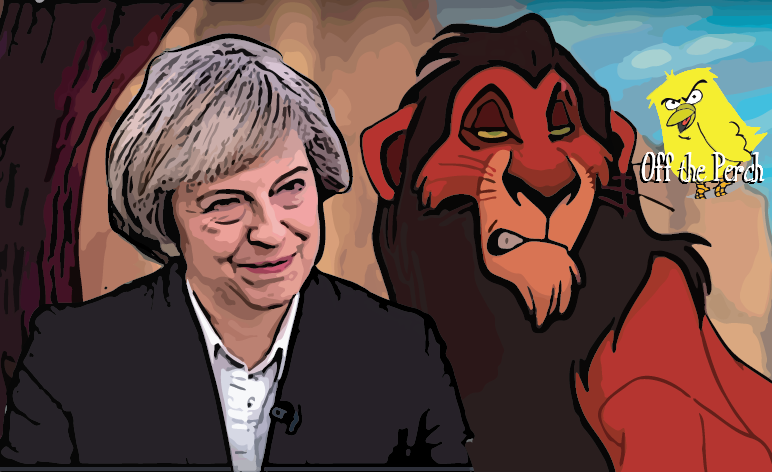 The PM has been touring the globe over the last few days. Primarily to show the EU that post-Brexit, we can still make new friends. Or at least that we can become bumbling sidekicks to psychotic super-villains anyway:

This is what it looks like when people don't know how to hold hands correctly, or one of the holders is a semi-willing participant pic.twitter.com/0Jvoxxb802

And yet despite our desperation, there still weren’t that many people who wanted to talk to us. As most of them realise it will be easier to screw us after the US and EU have had their way with us. Which is why the PM was forced to meet with one the world’s most low-key dictators of all. Namely Scar, the lion king.

An embarrassment meets a pride

There’s been much criticism of May’s visit. For a start, we can’t negotiate a proper deal with them until after we’ve left the EU. And for a follow-up, they’re just lions, so what can they really offer us anyway? Especially when you consider that like India, the lions want easier migration access to Britain. Which will be a hard sell for the PM for two reasons:

Despite this, the PM’s situation is so frantic that she will probably take anything she can get. Even if it’s little more than a handful of half-chewed antelope corpses. Which is also why she let Donald Trump hold her hand like she was some sort of child:

"Britain too proud to accept a bad deal"

"Give us a sniff of a deal, & I'll let you walk me round like a show pony"

And it’s almost certainly why she allowed herself to be photographed doing lion-stuff with King Scar. Lion stuff that included:

A betrayal of values

Perhaps the worst thing that she’s done, however, is refusing to condemn Scar’s ascension to the crown. An ascension which involved him murdering his brother with a stampede of panicked wildebeest. The only statement that May has been prepared to make being:

Regicide is a matter best left between kings and their murderers.

Although she was later overheard saying:

Oh god, I hope people don’t criticise him and make him not like me.

If this falls through, we’re going to have to help Kim Jong-un get a spot on Eurovision.

The talks did fall through, however. Because the lions realised that as anxious as we are for a deal now, it’s nothing compared to what we’ll be like in a year or two’s time.