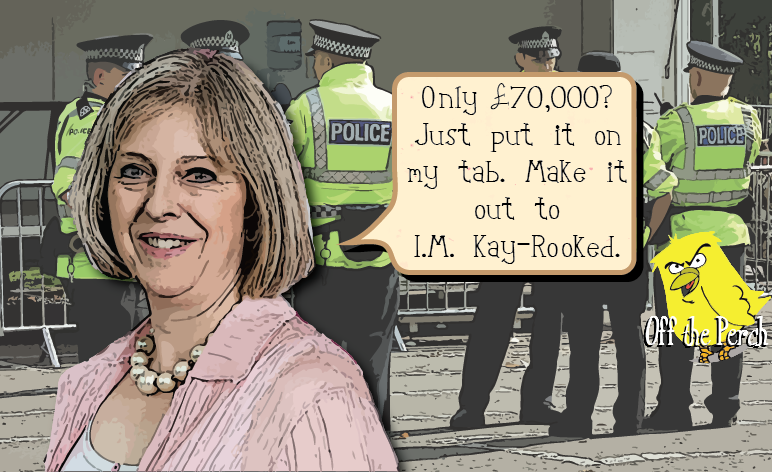 When the Electoral Commission declared that the Tories would be fined £70,000 for crooked electoral practices, many thought:

Jeepers, that’s a lot of money.

Whereas the Tories thought:

Hang on a minute, I think I left some loose change in my other jodhpurs.

What’s a country worth?

An undercover reporter for Off The Perch relayed the following scenes from Tory HQ:

MAY: If I’d known the cost would be so low, I would have suggested that we run some candidates in made-up constituencies. We could have had a majority of 600!

HAMMOND: So how do you want to pay for it?

MAY: Can I use my parliamentary expenses account? We did orchestrate it from parliament after all. Just put it on my tab.

HAMMOND: But won’t that result in another scandal?

MAY: And what of it? We’ll just cover up that scandal with another scandal. And the people watching will go on about how we got away with the scandal they’re voluntarily ignoring because Jeremy Corbyn didn’t land a series of successful one-liners in a parliamentary question-and-answer session that nobody f*cking watches anyway.

HAMMOND: And what shall I record the expense as?

MAY: Just write ‘LOL’ and then put a couple of smiley faces. If I’ve still got high approval ratings at this point, I could probably beat the Queen to death with a swan and get away with it.

According to our reporter, May then proceeded to laugh like a mechanical seal that was excitedly gagging on a herring.

Although they got away with a relative slap on the wrists from the Electoral Commission, police investigations are ongoing.

Which may not have been an issue in the past. When the police and Tories worked hand-in-hand to cover up the truth.

But lately, the government hasn’t been funding their police forces all that generously. And as such, they’ve forgotten the cardinal rule of creating a police state: