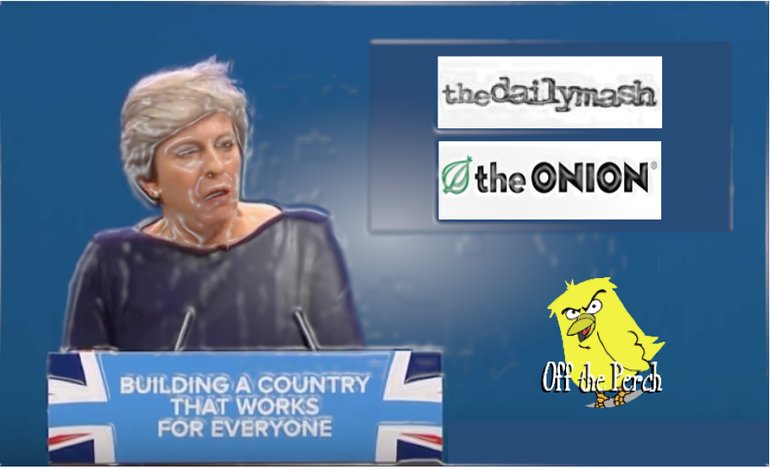 Spoof news sites The Onion and The Daily Mash have announced they will no longer publish articles about Theresa May. The sites claim the Prime Minister is “beyond parody”.

Daily Mash Editor-in-Chief Hoxton Topknot told Off The Perch that May has become Britain’s first post-ironic prime minister. Speaking from a loft in Dalston, Topknot said:

The purpose of parody is to take a bad situation to the extreme, using the comedy of that extreme to make a serious point. But this prime minister is beyond parody. We’ve had an uptick in writers taking sick leave due to stress. They’re literally working themselves to exhaustion trying to out-shit this government.

According to a spokesperson at The Onion, the problems run even deeper. Jelly Bae Fagin told Off The Perch:

Six times in the last month, our parody headlines have ended up happening for real. Our writers spend weeks crafting ever more absurd ways for Theresa May to fuck up, and she beats them every time. She either actually does it, or she does something so arse-clenchingly awful that our minds can’t even conjure it.

This has been crushing for team morale. Some people are even starting to confuse us with a real news outlet because our parodies keep coming to life.

Sometimes, you just have to know when you’re beat.

No news is good news

When Off The Perch attempted to reach May’s office for comment, the call was answered by a parrot. The bird screeched the phrase “Nothing has changed!” repeatedly until our reporter ended the call.