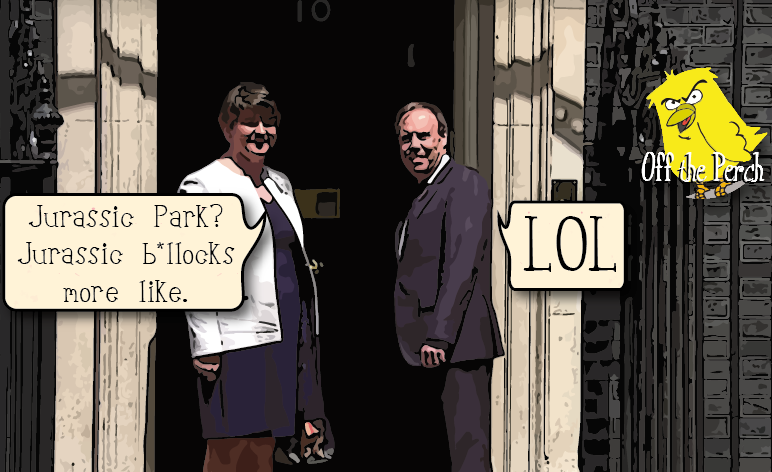 When Theresa May first made a deal with the DUP, most people agreed it wouldn’t end well. We’ve now reached a point at which it’s become obvious why that is.

The DUP holed itself up at Stormont and began making demands when it heard about the potential deal.

“We don’t want to be any closer to that there Ireland,” Arlene Foster demanded through a megaphone. “Also, we want the government’s official position to be that dinosaurs are a load of old bollocks.”

“Err…” Theresa May mumbled – also through a megaphone. “You want us to say that dinosaurs weren’t real?”

“NO!” Foster screamed back. “We want you to say they’re a load of old bollocks!”

May considered her options.

“Let me be clear,” May shouted over, “I am certainly open to probably maybe considering that possibility.”

“We also want to be allowed to spend all day wanking at our desks!” Foster added – realising that she had the upper hand.

“Don’t worry about that,” May responded, “there’s no danger of losing our wanking privileges. I’d have Damian Green tell you personally, but he’s currently engaged in some… research… at his desk.”

The DUP politicians talked among themselves about what else they could ask for.

“We want Kezia Dugdale back on I’m a Celebrity…” Foster demanded eventually.

A few months ago, a hung parliament seemed like a problem that only the DUP could solve. It now turns out that the real noose around the Tories’ necks is the DUP itself.