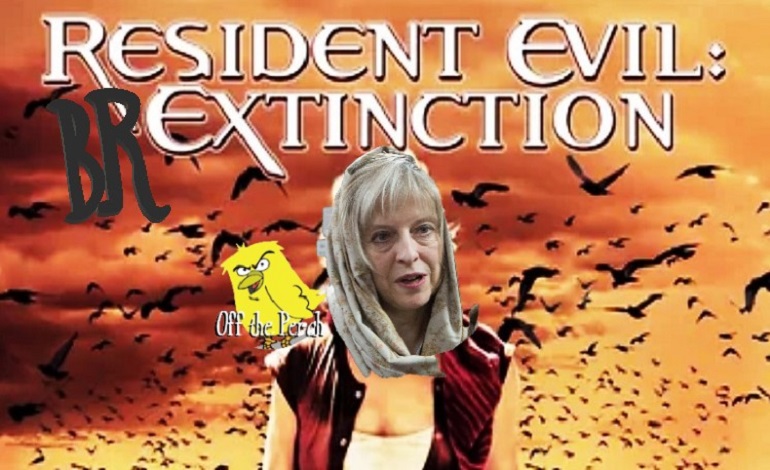 It has been revealed that the Tories have been nominated for the Golden Globe award for Most Preposterous Performance in a Serial Horror; the ‘raspberry’ style gong for a truly awful contribution to unnecessary drama.

The nomination is for their role in Resident Evil: Brextinction; the widely-panned ensemble horror co-produced by the BBC and 21st Century Fox and shown on The Horror Channel. The poundshop production, a sequel to Resident Evil: EUpocalypse, follows the life of Alice, played by Theresa May. The genetically-modified heroine is tasked with fighting the secretive Berlaymont Corporation, a group of evil EU despots determined to get their hands on Britain’s sovereignty.

Beneath Brussels is Berlaymont’s secret underground lab, The Skive. After a viral weapon known as the ‘Remoaner-virus’ escapes through the air vents and wafts across the English Channel, the Tusk-onator, a massive supercomputer running The Skive, plants the Remoaner-virus on all EasyJet flights from Magaluf, Ibiza and Ayia Napa – eventually infecting 48% of the UK population.

Alice and a group of Tory Brextinction survivors (played by Jacob Rees-Mogg, Michael Gove and David Davis) must battle the Guardian-wielding zombie population created by the Remoaner-virus, while fighting the Berlaymont Corporation. And lolloping in and out of the film is Alice’s bumbling sidekick, Boris Johnson. Played by Boris Johnson.

It was a tough call to find the most preposterous performance this year – what with Fifty Shades Darker, Power Rangers, and Smurfs: The Lost Village. But the Tories in Resident Evil: Brextinction are up there.

David Davis repeatedly said he had learned his script, pre-production, before admitting on the first day of filming that he had never even seen a copy of it. Theresa May claimed to be ready, strong and stable enough for her role. But then she had a throat infection for half of the shoot. And Boris kept making offensive comments to the European cast members, so was eventually packed off to open a piss-up in a brewery. Rumours are everyone there was stone cold sober.

Follow-up series are reportedly in production. These include three Resident Evil sequels: RemoanerLife, Brextribution and The Final Impact Analysis. But a BBC insider told Off The Perch:

Look, right. We were confident that our latest piece of pro-Tory propaganda was water-fucking-tight. Kuenssberg even signed off on it. But when it came to it, the actual Tories themselves were so fucking chaotic and preposterous, it made filming impossible. Seriously – you couldn’t even make satire from their performances, they were so bloody bad.

On hearing the news of the Golden Globe nomination, much of the UK population agreed with the BBC insider. Because with the mess the Tories are making of Brexit, you literally couldn’t make this shit up. So why bother?

Featured image via The Canary/Flickr